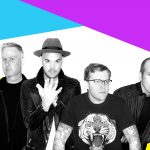 Four North Texas bands — Black Tie Dynasty, Midlake, The Orbans and Flickerstick — have reunited after years apart, rediscovering the joy of performing together.

Fort Worth-based Black Tie Dynasty formed in 2004, releasing their first full-length record Movements on Idol Records in 2006. The song “Tender” achieved top-10 success on the Billboard Charts, and they gained a larger audience touring with Spoon and Guided By Voices. Down Like Anyone, their follow up record, was released in 2008, before they… Read more »