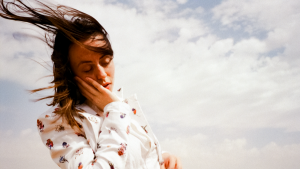 Here in the United States, we typically think about music hubs like New York, Los Angeles and Nashville.

We also focus on bands from “across the pond,” in the United Kingdom. Over the last decade, however, a country across the other pond has been producing great music – Australia.

Gotye’s hit song “Somebody That I Used To Know” kicked off a new pipeline of artists, ranging from Gang Of Youths (whose song “Let Me Down Easy” we’ve spotlighted) to Courtney Barnett. Today’s “The Best Song You Never Heard” comes from an Australian native who may have gotten lost in the mix.

Gordi, née Sophie Payten, was born in New South Wales and started getting noticed in 2015. Triple J, one of the great music discovery stations in the world, which is funded by the Australian government, added her to its Unearthed project.

She was soon nominated for the Unearthed Artist of the Year award in 2015 and named one of the 40 best new bands by Stereogum. After signing with Jagjaguwar in the US, she released her first EP, Clever Disguise, in May of 2016, followed up by her debut album, Reservoir, in 2017 and another album, Our Two Skins, in 2020.

During her rise as a professional musician, she had a side job – doctor.  She went to medical school at The University of New South Wales and worked at Prince of Wales Hospital in 2019.

One of the songs that stand out on her debut EP is “Wanting.” The first impression of the song is that it could be from Imogen Heap since it sounds a lot like “Hide and Seek.”

Although it has similar heavy reverb and effects, the song is unique as well. It shifts between lighter effects on the verses, where Gordi’s voice comes through strong, before the music rises in the chorus.

The song is gorgeous and powerful and one of the more unique offerings from the recent talent coming from Australia.

If you enjoyed this track, take this and past “The Best Song You’ve Never Heard” picks with you via our Spotify playlist here.