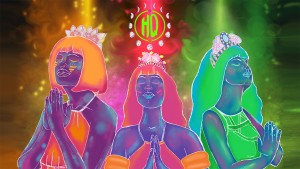 Helium Queens: A Space Opera debuts at Artstillery on August 20th.
Xander (who plays in multiple bands, including The Polyphonic Spree and PriMadonna) teamed up with fellow musicians Sharla Franklin (King George, The Fiddle Rascals) and Chelsey Danielle (Pearl Earl, No Good Babies) in 2017 to bring the idea to life.

“The thing with Sharla and Chelsey and I, is we’re able to listen to each other and there is some sort of connection that the music creates itself,” Xander said. “It’s just extremely organic for us to write together.”

Xander, Franklin, and Danielle refer to themselves when not in character as the “Earthling voices”, but the trio takes on different personas as the Helium Queens. Dressed in neon, glowing outfits, Xander performs as Piscea Xandaria, Franklin as Starre Lux Nectaris, and Danielle as Venoo Andromeda. The trio has crafted a whole universe (or YOUniverse as they call it) that belongs to the Helium Queens, full of multiple different parts that all fit together in a very interesting, perfect puzzle.

In addition to their self-titled debut album that was released last October, the Helium Queens also tell their story in a series of videos that were shot by videographer Sarah Passon Zazz and are released on every full moon. Even more of the story is revealed about the Helium Queens on their patreon– there are more videos and music, a time traveling hamster named Diska Tekka, and short sci-fi stories that are written by Xander.

“It’s an ongoing process,” Xander said. “The more time that’s spent with it, the more that is revealed.”

And, even more will be revealed, still. One of Xander’s goals was to turn the Helium Queens into a theatrical production- a dream that will soon be realized. 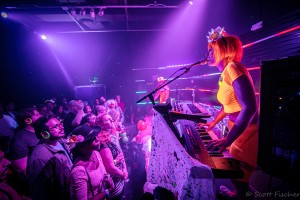 “It’s really difficult to set up that immersive atmosphere in a 15-30-minute bar setup and breakdown,” Xander said. “We wanted to really build the environment and also bring in some of the other characters that we haven’t gotten the opportunity to bring in.”

Xander applied for and received the ArtsActivate grant from the City of Dallas Office of Arts and Culture and is in the process of creating a full immersive event called Helium Queens: A Space Opera. The space opera, which Xander says is the first of its kind in Dallas, will run the last two weekends in August at Artstillery.

The latest single from Helium Queens is a warning of sorts from the futuristic moon goddesses. Titled “Future People”, the song was one of their full moon release videos and is included on the recently released Helium Queens album.

“Future People is a warning to humans not to forget the past, that our time here is limited, and we must take responsibility for life and each other and the planet while we are here,” Xander said.

The song is fronted by Danielle’s Andromeda with Piscea Xandaria and Starre Lux Nectaris singing perfect harmonies behind her. The sound of synthesizers pairs so well with Danielle’s huge drum riffs that you can almost see the part of the moon that the Helium Queens call home.

The Helium Queens will keep adding to their YOUniverse. You can learn more about it on their website and patreon.