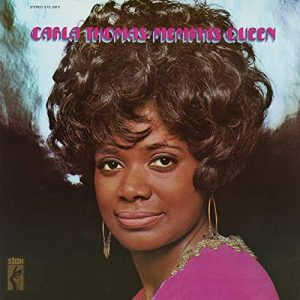 March is women’s history month and KXT just celebrated International Women’s Day on Monday, so for the sophomore edition of The Best Song You’ve Never Heard, let’s look back on one of the greatest underappreciated singers of all time.

In the early days of the legendary Stax Records label, one female artist sparked their influential rise. Before Issac Hayes, before Otis Redding, and even before Booker T and the MGs, there was Carla Thomas. “Cause I Love You” was the first song that Stax Records – at the time Satellite Records – recorded at their now-historic South Memphis studios. The song featured local DJ and singer Rufus Thomas and his daughter, Carla. The record was a hit in the Memphis area and Carla’s vocals attracted the attention of legendary Atlantic Records Vice President Jerry Wexler. Wexler worked out a deal with Stax owners Jim Stewart and Estelle Axton, an influential woman in her own right, to release Carla’s songs under the Atlantic label and to start distributing all Stax releases. That deal not only provided the financial and distribution backing Stax needed to expand, it was the beginning of their influential Memphis soul sound.

Carla went on to release several hits for R&B radio, with six songs reaching the top 10 in the 1960s. Unfortunately, she didn’t catch on at Top 40 radio as often and has been overshadowed by many of the other talented Stax artists. Nowadays you might catch her on throwback soundtracks like 2017’s Baby Driver, which featured “B-A-B-Y”, and most recently on backing vocals for Valerie June’s “Call Me A Fool” but for the most part she isn’t featured as one of the soul greats. This week’s Best Song You’ve Never Heard is one of her last hits, released in 1967,“I Like What You’re Doing To Me”.