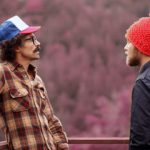 Enter by midnight TONIGHT for tickets to see Rogue Wave on Thu, June 9 at Club Dada.

Zach Rogue formed Rogue Wave in 2002 after losing his job in the dot-com bust. The band started to gain traction with their second release, Descended Like Vultures. Television placement and critical acclaim helped them grow their audience with their next record, Asleep At Heaven’s Gate. The band recently released Permalight, which finds them exploring… Read more »

Rogue Wave – “Permalight” Zach Rogue’s band continues to grow and explore new sonic territory on Rogue Wave’s latest, Permalight. Their brand of melodic indie rock is augmented by electronic touches on this title track. The band started gaining traction with their 2005 release Descended Like Vultures, which led to tours with Spoon and Mates… Read more »