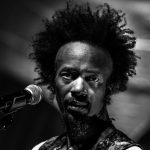 From beginning to end, July is full of fantastic music. Take a break this summer and enjoy one or two (or all) of these concerts!

Enter to win a pair of tickets to the show on October 10 at Allen Event Center in Allen, Texas.