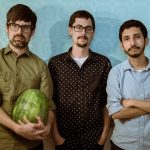 Some new tunes for your new week, courtesy of KXT’s New Music Mondays.

Arcade Fire covering Talking Heads’ “Speaking in Tongues”. Doesn’t get much more dead on than that.

Arcade Fire – “Modern Man” This thundering track from Arcade Fire’s much-lauded The Suburbs shows why the band has gained a large following over the releases of its three records. Win Butler’s haunting voice over the subtle shifting time signature helps flesh out his near-paranoid lyrics. Hints of the Police and the Talking Heads help… Read more »

Arcade Fire – “The Suburbs” The Arcade Fire have been critical darlings since the arrival of their debut full length Funeral in 2004. The follow-up Neon Bible came out to great acclaim in 2007, and the fervor surrounding this upcoming release, The Suburbs, has been greater than almost any release this year. This song bounces… Read more »

Talking Heads – “This Must Be The Place (Naive Melody)” This classic, from the Talking Heads’ fifth record Speaking in Tongues. Remarkable in that the main melody never changes throughout the entire song, David Byrne’s vocal melody lifts lyrics that he admits are “made up almost completely of non sequiturs”. The Arcade Fire also recently covered… Read more »