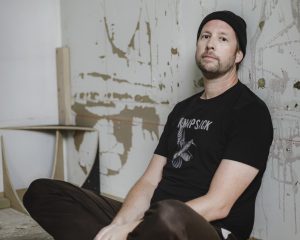 The March Divide is the project from Fort Worth artist Jared Putnam.  Ernie Garcia, normally with El Vez and Javier Escovedo, sits in on bass and Jason West on drums. Putnam is a humorous guy, and that shows through in his songwriting.

“Tension In the Air” is the second single off The March Divide’s upcoming album, Lost Causes, which will be released on June 10th, and Putnam says the song is about needing a release from the mundane routine of life.

The band decided to personify that theme in puppet form for the “Tension In the Air” video, showing what that might look like for a puppet who doesn’t have self-control. The puppet is one of three that were inspired by the movie Labrynth and was created by a group of artists in El Paso, TX.

“Aside from just being a fun way to do it, we felt like using a puppet, especially this puppet, would help people relate in an alter ego/devil on your shoulder kind of way,” Putnam said. 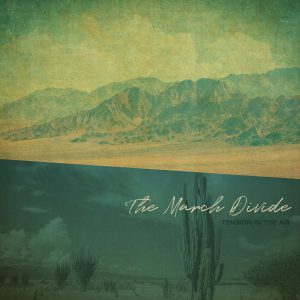 Tension In The Air will be released on the album Lost Causes, out June 10.

The video was directed by Hector Gallardo of Subharmonic City Productions. Gallardo can now add puppeteer to his resume, as he learned a new skill while filming the video.

“Growing up with shows like ‘Sesame Street’ and ‘Fraggle Rock,’ I always loved what they did with these puppets,” Gallardo said. “Until I did this myself, I always took for granted what might go into making those types of shows. Some of these shots are honestly torturous.”

The video follows our puppet hero as he blows off steam, eventually finding his way to a bar where he was loved in real life.

“In the scene with the band, everyone at the bar was super happy to meet and party with the puppet,” Gallardo said. “They kept asking what his name was and I realized we never gave him one. That night, he was forever known as Maurice.”

The KXT Local Show is a weekly radio program curated and hosted by Nilufer Arsala. Tune in every Thursday from 7-8pm to hear new and classic tunes from North Texas artists spanning a broad mix of genres, including hip hop, Latin, rock, blues, jazz, folk and R&B.

Are you a North Texas musician? Want to hear your work on The KXT Local Show? We’d love to hear from you! Submit your music for consideration here: kxt.org/submissions.

UPDATE: This post was updated on April 19 to correct the attribution of a quote. Director Hector Gallardo operated the puppet in the video.

Nilufer is the host of the KXT Local Show and a KXT weekend host. She’s also the Manager of Radio Operations for KERA and KXT.