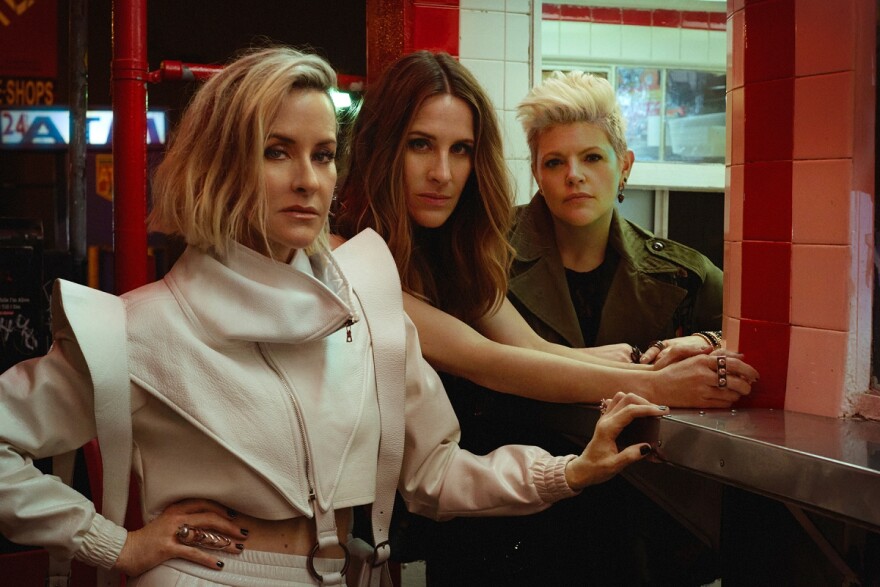 Martie Maguire, left, Emily Robison and Natalie Maines of The Chicks, appear in a 2020 photo. The Chicks are heading back on tour this summer, their first major outing since 2017 and first shows since releasing their fifth studio album “Gaslighter.” Photo: Robin Harper/Associated Press

The Chicks are hitting the road for their first major tor since 2017, but their hometown of Dallas is noticeably absent from the list. In fact, there are no Texas dates among the 27 North American cities the country trio will be playing this summer.

The tour kicks off in St. Louis on June 14, with stops in Chicago, Toronto, Boston, Denver, and two shows in Los Angeles.

“It is surprising there’s no Texas dates,” Dallas music writer Preston Jones said. Jones is a contributor to KXT.org. “No Dallas. No Austin. No Houston. There are no Florida dates, which is a little strange. My guess is that this is just the first phase of touring.”

The Chicks canceled a tour last year in support of their 2020 album “Gaslighter” including a show in Dallas on July 12 at the American Airlines Center, but the city was left off this year’s rescheduled tour. There’s still hope for Texas fans.

Jones points to the yet-to-be-announced lineup for this year’s Austin City Limits festival as a potential stop for The Chicks. Still, Texas is conspicuous in its absence from what is otherwise a coast-to-coast tour, Jones said.

The tour announcement comes just days after Texas Governor Greg Abbott ordered the state’s child welfare agency to treat gender-affirming procedures as “child abuse.” The Chicks have not made any public statements regarding Abbott’s order, but the band is well-known for their political candor.

“It’s possible there’s a political statement here,” Jones said. “But, The Chicks especially, if they were going to say something, they would say it. That’s been a hallmark of the band. They’re not shy about saying what’s on their minds.”

The Chicks, who dropped the “Dixie” in 2020 in response to that year’s wave of protests for racial justice, have long had a contentious relationship with Texas. In 2003, frontwoman Natalie Maines told a London audience she was “ashamed” that then-U.S. President George W. Bush was from Texas and criticized the looming U.S. invasion of Iraq.

“That was a firestorm that you could argue still burns to this day,” Jones said. “They were boycotted. There was an enormous backlash. Their songs were pulled from the radio.”

The response from conservative country fans was severe. Maines received an anonymous death threat just before the band’s show at the American Airlines Center in July, 2003.While the fallout was swift and long-lasting, the Chicks still have plenty of fans in North Texas. They sold out the Gexa Pavilion in Dallas during their last tour in 2016.

“It was a homecoming in every sense,” said Jones, who was in the crowd that night. “It was vindication on one level but also a rebirth. Enough time had passed because it had been close to 15 years since they had last performed in Dallas.”

Hopefully, North Texas fans won’t have to wait another 15 years to catch the Chicks live on stage.

This article originally appeared on our sister site, Art&Seek.

Got a tip? Email Miguel Perez at [email protected] You can follow him on Twitter @quillindie. KXT is made possible through the generosity of our members. If you find this reporting valuable, consider making a tax-deductible gift today. Thank you.