December is shaping up to be merry and bright with these stars coming to town.

Here’s the scoop on North Texas’ live music happenings sure to raise your holiday spirits:

Clark got his start as a teenage prodigy around Austin’s blues scene, eventually signing on to Warner Brothers records and quickly emerged as rock ‘n’ roll’s preeminent guitar hero around the globe. A soulful musician who has been predicted to “save the blues”, Gary Clark Jr. fuses rock and soul music with elements of hip hop in his songs. Clark has shared the stage with many legends of rock and roll, including Eric Clapton, B. B. King and the Rolling Stones. Just last year, a collaboration with Leon Bridges was announced, the pair having re-recorded the 1970 Crosby, Stills, Nash & Young hit, “Ohio”. Get a preview of Clark’s new album, to be released early next year, by seeing him live in Irving on December 1!

Known for his laid back and drifting guitar playing, style — not to mention the hair — Vile’s music explores inventive guitar tones on meditative and often self-reflective songs, showing he doesn’t take himself too seriously. His influences include the likes of Neil Young, Sonic Youth and Dinosaur Jr. Having most recently returned from a North American tour with Courtney Barnett off their joint album Whole Lotta Sea Lice, Kurt Vile also released Bottle It In just this fall, which was uniquely recorded at various locations in between tours and family road trips. Catch him at Canton Hall in Deep Ellum on Friday, December 7!

January of 2018 featured the release of Anderson’s fourth and latest album, Encore, which was preceded by the breakthrough single “All on My Mind,” featuring the likes of Ed Sheeran and Snow Patrol’s Johnny McDaid. For the album, he also enlisted the talents of Chris Stapleton and his wife, Morgane on the track “King for a Day,” recorded primarily at Nashville’s historic RCA Studio A. Encore positions East as something of a country artist looking to bend the rules of the game — with a subtle shade of country twang in his vocals, but operating just outside of the genre’s conventions. See for yourself as he performs at The Rustic in Dallas, on Saturday, December 8!

JD McPherson’s unique and retro sound fuses rockabilly, blues and modern rock — and always gets your toes a’ tappin’. We’re stoked that McPherson is bring his retro vibes to The KXT Holiday Concert this year to perform songs off his latest rock n’ roll Christmas album, Socks. Join us in celebrating the holiday season with JD McPherson in this beautiful Downtown Dallas venue, The Statler Ballroom on Thursday, December 13! 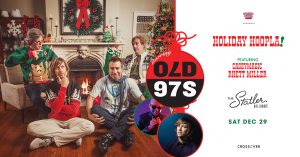 Time to break out your ugly sweaters and raise a glass of eggnog to these titans of alt-country-rock and North Texas music scene! Because, let’s face it — there aren’t more than a handful of bands in history who can claim to have an intact, unchanged line-up as they approach twenty-five years together. Experience the undeniable chemistry that Miller, Bethea, Hammond and Peeples enjoy at The Statler on Saturday, December 29. Hope to see you there!