Fort Worth songstress Rachel Gollay is known for her gorgeous, expressive voice and whip-smart lyrics, quickly emerging as one of Texas’ must-know artists. 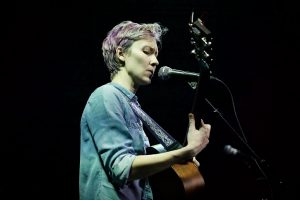 This year marks KXT’s second-annual celebration of Local Music Month, and in honor of this October occasion, The KXT Local Show host Amy Miller spoke with Rachel Gollay about her indie rock/pop band Gollay, and about what makes the North Texas music scene one-of-a-kind. Here’s what she had to say:

Q: Thinking about the local music scene here in North Texas as you’ve experienced it, what has been one of your favorite memories?

Rachel Gollay: We threw a “Built For Love” music video release party here in Fort Worth at The Live Oak (R.I.P.) with local drag performers who starred in the video, which turned into a dance extravaganza emceed by Frida Monet wearing a trash bag. You had to be there.

Do you have a favorite local show that you’ve attended? What stands out to you from that show, and why?

RG: I’ve had so many wonderful experiences and memories going to shows in D-FW. One of my favorite recent shows was seeing Cody Lynn Boyd’s album release set at Main at South Side (M*A*S*S). It was so thoughtfully put together and he and the band created a really cool, moody atmosphere. I also really enjoyed seeing Claire Morales and her band at M*A*S*S recently coming off an East Coast tour. Her new songs are so rocking.

Who are some North Texas artists that you admire?

What is one local album that you think everyone should check out?

RG: Andy Pickett’s self titled record is a gem.

Are you working on anything new at the moment that we can look forward to?

RG: Yes! Our next full-length album/followup to Built For Love will be released this fall, with the first single to come very soon. Maybe even a KXT debut? 🙂 Keep one eye and one ear out.