Dallas music legends Edie Brickell and New Bohemians release their first new album in 12 years, ahead of their homecoming show at Granada Theater on October 11. 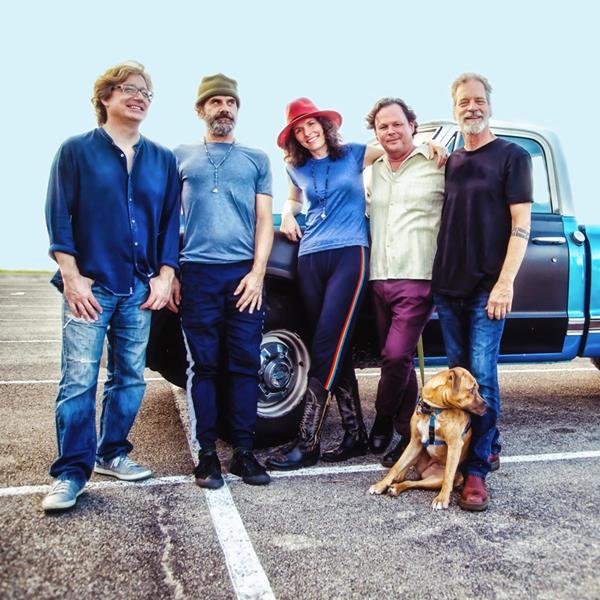 Edie Brickell and New Bohemians are Dallas through and through. Known most notably for the chart-topping “What I Am” off their breakout album, the 1988 hit was hailed by critics and sold over a million copies. After the band split in 1991, Edie went on to do a multitude of solo projects and tours over the years. But in 2006, the band reunited to release a new album titled Stranger Things, and now, 12 years later, they’re returning home to celebrate the release of a brand new album, Rocket.

This month is Local Music Month at KXT and as we celebrate the music scene here in North Texas, we like to not only celebrate new bands that are emerging but also we like to honor the rich musical history that has led us to where we are today. Do you have any particularly memorable moments from back in the day when you were an emerging band that hadn’t yet hit the national spotlight?
Edie Brickell:  It was always so much fun to see the same people in the audience show up gig after gig, every weekend, dancing and singing along. My memories of playing in Dallas are flooded with all those fun-loving people and how much they energized the band and influenced improvs. They made me laugh and feel good. I missed seeing them when we went on tour.Kenny Withrow: New Bohemians were fortunate enough to have so many great memories from the early years. Our days playing at the 500 Cafe were some of our most special shows. Most of our memories are musical in nature, and have to do with the incredible vibe and feeling at the shows — the sense of community and a love for music everyone was sharing. Anyone who lives there knows what I’m talking about. It was a very special time.
Deep Ellum has seen a resurgence in the past few years. Have you been down there recently and what are your thoughts on how it compares to what it was in the late-80s/early-90s?

EB: I moved so far away and stopped going to clubs. I’ve been home watching Sesame Street. No idea what’s happening on Elm Street.KW: I’ve been down in Deep Ellum quite a bit in the last few years. I’ve had a chance to live in the area, having just moved to Old Lake Highlands after being in Exposition Park for three years. I’d say it’s a larger scene, with certainly more, different types of venues to play in. It’s lost the small neighborhood quality of the late ’80s, but that’s only natural. At a certain point, you felt like you knew everyone in the scene…and pretty much everyone knew each other. Now, the music scene in Dallas is so big it has so many different centers for types of music — Club Dada, The Curtain Club and Deep Ellum Art Company all have pretty different music, and a whole different group of people that hang out there. Deep Ellum Art Company has become a central hub for jam bands and improvised music. So it’s exciting to see many different scenes blossoming at the same time. It’s a sign of a real city growing up.

EB: This was our best studio adventure yet! Kyle Crusham was a genius at creating vibe, as well as amazing sounds in the recording studio. He captured our joy. We finally learned to ride that bike!

KW: Well, the band was getting back together just to do a benefit show for La Rondalla. But once we got together in a room, we started improvising as usual. We quickly had a collection of songs, and decided to record a couple of them, which we could tell immediately had a life and an identity all to themselves. These songs were something. When the playback came out of the speakers in the the studio, it really became very emotional for us. There was a natural flow that was happening; we were very grateful and wanted to honor it. We’re a spontaneous band, and since our earliest versions of the songs written tend to be the best versions, we made a plan to return to the studio and to write the songs there. We were lucky enough to have several songs played and recorded in the same day — some on the first or second take. We discovered how to tackle the recording process and keep the spontaneous improvised component intact, and found to this to be our method from then on.

Last year the band reunited for three sold out shows at The Kessler Theater in Dallas which garnered a lot of excitement from the community. It also seemed like you guys were having a ton of fun on stage. Was that the catalyst for getting back into the studio?

EB: Those shows were definitely fun, but it was seeing Kenny in the studio with Kyle that made me want to record with New Bohemians again. Kyle brought out the best in Kenny, and got him to play in the studio the way he plays live, or when we’re jamming. I was about to release a solo record (Kenny came in to play lead guitar on one of those songs and Kyle was engineering that record), but when I saw their chemistry, I knew we had a shot at making a record that really captured the band’s spirit. I asked Kyle if he’d do an experimental week in the studio producing New Bohemians, and it was even better than I’d hoped. I abandoned my other record just before it came out, to go with our band record. The joyful energy is palpable! I think we finally have a team to make records that represent the band’s spontaneity and creativity.

KW: Yes, the benefit for the school was the absolute catalyst for us to play together again. We have done other shows recently — having played at the Oak Cliff Music Festival a few years ago, as well as shows with the group Heavy Make-Up (an all-improvised song band). But something happened this time that was different; there was suddenly a seemingly endless well of songs and music. I think we’ve all naturally come to a place in our lives where creativity is the centerpiece. Most of us have kids that have either graduated, or are getting close to it. I think we’ve been afforded the chance of a unique look at life, artistically. We are all 50-something, with genuine enthusiasm and gratitude to be playing. No one is jaded—everyone is at the top of their game and living music.

Your new album Rocket comes out on Friday. Seeing how quite a few years have passed since you were in the studio together, can we expect some new influences coming into your sound?

EB: Everybody has been listening to so many different genres and playing with different artists, learning so much throughout the years. There are a lot of new influences as we are reflecting the love for all kinds of music. And Kyle adds his own artistry as a producer/engineer/mixer to influence the sound of the band.

KW: There are most definitely new sounds and new directions on this record. We have touched on our early days of rocksteady ska, as well as going to some more eccentric musical areas that are better-known from our live performances. This is our most diverse album yet. It’s much more like what will happen if you come see a show.

We’re loving the single, “What Makes You Happy” and have watched the video more than a few times. Who is your new four-legged friend and is there a story behind his/her appearance in the video?

EB: That’s Riga, Brad Houser’s rescue dog. She rescued Brad. She goes everywhere with him — to the 7-Eleven, out on his little fishing boat, even to the acupuncturist — but she throws her paws over her eyes when they bring those needles out. She wouldn’t miss a day at the roller rink making a music video, but she was bummed that the skates didn’t fit and she got a little fussy in makeup, demanding more eyeliner for her close up.

KW: Riga is most definitely the star of the video. Such a sweetheart. She stays with Brad, always.