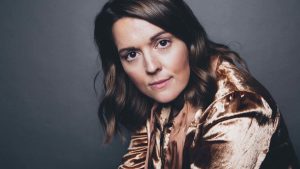 Brad and Brandi chatted about motherhood, her songwriting process and the harsh and messy reality of forgiveness, just ahead of today’s release of her sixth studio album, By the Way, I Forgive You.

Brad Dolbeer: So you invited us to your house today to play some music for us, the new album is coming out February 16 and the album is By The Way, I Forgive You and to me that’s not just a catchy album title, there’s something behind that. That’s not just a statement so what does that mean for you?

Brandi Carlile: Well, the word forgiveness was kind of exposed out of the record when the work was done and we had recorded about 18 songs. Shooter Jennings…

BC: Waylon’s son, yeah, he took eight of them off.

BC: Yeah, and it was to my dismay. I was horrified by it.

BD: So how did he have the leverage to do that?

BC: He just thought, he wanted to see what I would think and I, you know, absolutely adore him so he sends this to me and he says “Don’t hate me,” and I listened to it. Then it was like a sculpture was revealed. It was like he’d taken away the bits of stone that just didn’t fit and that’s when I realized the message of forgiveness in this was prevalent throughout the entire record. And that what was left were these kind of thematic, heavy poems about radical acceptance and ugly, filthy difficult forgiveness and it gave our record a weight to it that we never really had before. So that’s how I found out that the record was about forgiveness.

BD: Okay, so that’s when you came up with the title? At that point?

BC: Yeah, by the way, I forgive you, Shooter, for taking eight of my songs off the album. I’m joking. 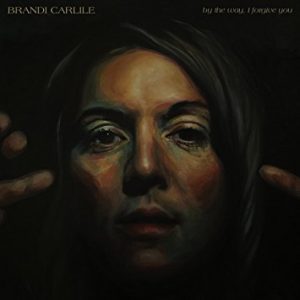 Brandi Carlile’s upcoming album By the Way, I Forgive You.

BD: We’ve been playing “The Joke.”

BC: Yeah, thank you.

BD: Well, you’re welcome. Thanks for making great music, it’s easy to play. So I had a chance to listen through the rest of the album and without getting into the minutiae of each individual song I just wanted to touch on a couple of those songs. The one called “Mother,” I know that’s special for you.

BD: Can you talk about your daughter?

BC: Yeah, you wouldn’t think it’d be special for me cause my daughter’s not here today, I kicked her out and sent her to her cousin’s house. Um, yeah, she’s three and a half, her name is Evangeline, she’s my buddy. Um, she’s my best friend, we’re obsessed with each other. She hasn’t always been easy to get along with. I learned when she was born that I’m not really that crazy about babies.

BC: And I just couldn’t believe that anyone was sending us home with a baby from a hospital. It just seemed…wrong somehow, like it should be illegal.

BD: Being a parent, I know that feeling when they hand you this little bundle and I had that feeling and it was like “If I put this little being down and walk away, their not gonna make it.” I have no skills for what I’m about to do.

BC: All of that. All of that. Exactly. And nobody really says that, though when you’re getting ready to have a baby. People don’t say like, this might be really hard, you might question whether or not you’ve made a mistake. You might feel nothing.

BD: All they say is it’ll change your life.

BC: Change your life which is overwhelming…

BD: Which you have no perspective on at all.

BC: Yeah, an enlightening, tidal wave of love and it’s not that that didn’t happen, that’s not that that’s not the way that I feel, it is the way I feel now but that it was kinda hard one, and I wanted to, um, write a song where I was being honest with myself about the fact that it didn’t come naturally to me and, I don’t know, maybe that could help somebody else.

BD: We were talking earlier about this, about the creative process that you have and that you, you know, we were talking about the difference between baking and cooking cause you can cook and go “Oh, I’ll throw a little of this in, a little of that in” but when you’re baking, it’s gotta be measured, it’s gotta be perfect and all that. You equated that to your songwriting process as well. So how does that work for you?

BC: Yeah, it does, and sometimes I don’t write a song for two years and I just let that happen.

BD: So how do you know when it’s time to, I mean, with that in mind, when you go in to do an album, so there’s no time schedule? It’s like, okay, I’ve got an album and I’ve got to get in and do that work? With you, how does that work?

BC: I don’t tend to go in to make an album until I’ve got songs.

BD: Okay, so that’s an ongoing…

BC: That’s ongoing, I mean, it could happen every year or every five years depending on whether the songs are there. Tim and Phil [Hanseroth]  are really prolific writers and so that helps the process a lot. And there are things that you can do to get songs started and the juices sort of flowing like, play different instruments, you know? Start to spend a little bit of time on a mountain dulcimer or something like that. A song will come out of it and then another song will come out of that. But, yeah, I tend to go into the studio with a pile of songs but no demos.

BD: Well, that’s different, I think, than how most people do it. But it works, right?

BC: It does work, I have a superstition that, it’s like the whole somebody snapping a photograph of you steals a little piece of your soul? Like, I really believe that the moment, the rock and roll moment I call it — even if it’s a ballad, even if its a sad song — only happens one time and so, I don’t want to waste that on a demo.

BC: Yeah, it’s right on the edge, it’s right at the very second that you know the song but you don’t have any command over it yet.

BD: Wow, that’s really great. I’ve never heard anybody explain it that way and I’ve asked a lot. Well, I’d love to hear some of the music, you’re gonna play some songs for us today and I want to thank you for taking the time.

Listen to the live recordings of Brandi Carlile’s new songs below and hear the full album starting February 16.