Siamese says their live shows make you “…feel like you could go out and invent a new color, or wear a leotard to work.” 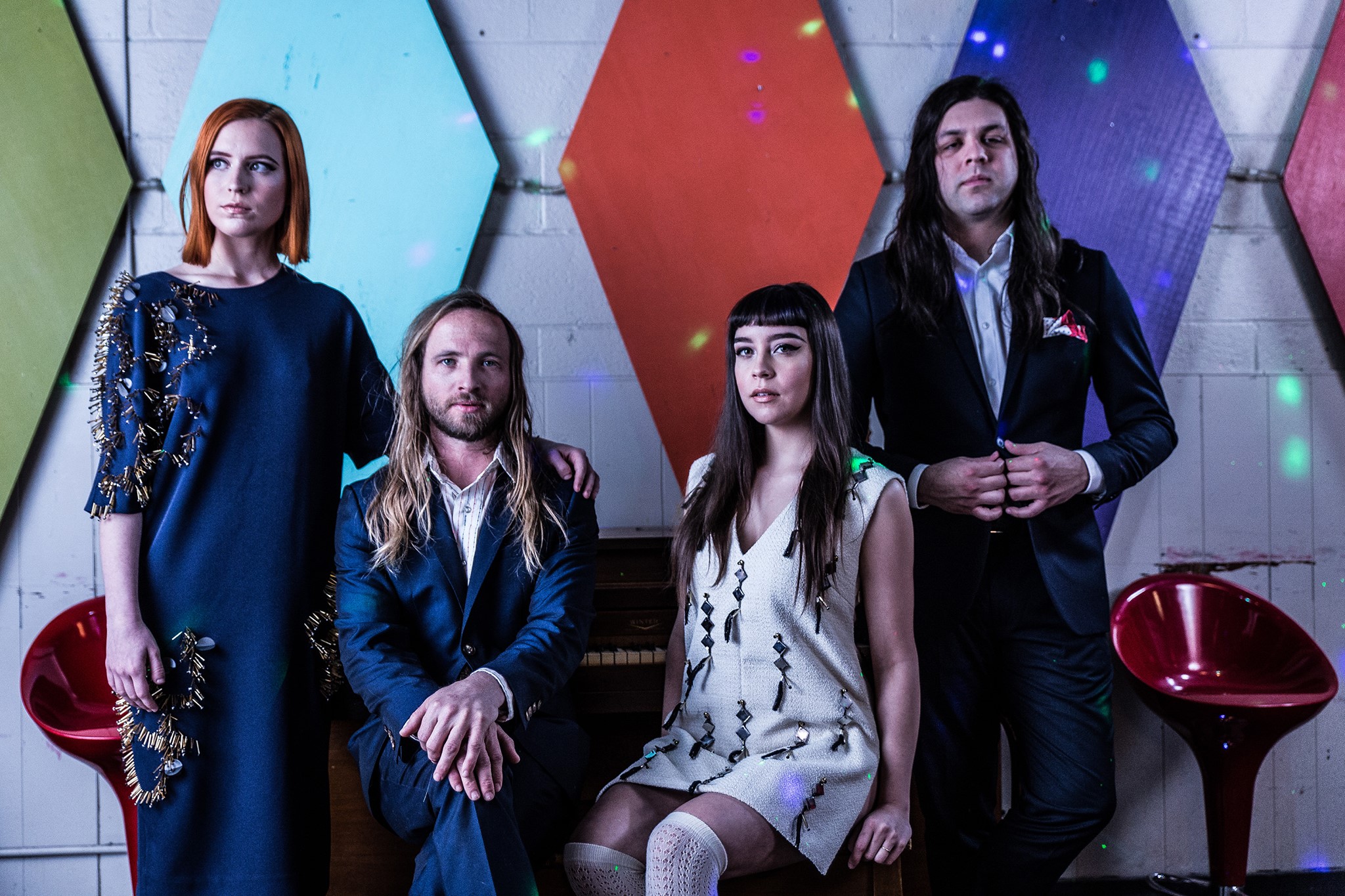 And isn’t that just exactly how you want to feel after a concert/most of the time? Lucky for us, then, that we’ve got the Dallas avant-glam band on tap for Summer Cut this Friday, June 3 at South Side Ballroom. Before that cosmic, life-altering performance though, we thought we’d shoot the North Texans a few questions about their new album, creative process and more.

And don’t worry — we’ll let you know of any post-Summer Cut leotard sightings around the studio. Looking at you, Brad…

KXT: Tell us a little bit about your upcoming album.

Siamese: The record is our own brew of glam, gloom, and psychedelic, among other things. Some of the lyrics are written from the perspective of fictional characters (a cult leader’s teenage daughter going on a first date), and some are more personal (an identity crisis over being a cad or committing to a partner.)

We tracked at Elmwood Recording with Alex Bhore — he’s great to work with. He offers tons of ideas for song arrangements and has a gift for translating our vague and absurd requests into amazing tones, even if it’s something like “can you make the synth sound a little less like cirrus clouds and more nimbus?” or “I want the reverb to feel like you’re being chased through an abandoned roller rink by a lonely agoraphobe.”

Siamese: A few of us have been friends since we were teenagers, but it wasn’t until the beginning stages of the band that we all became really close. As far as being theatrically inclined, most of that comes from growing up on ’70s glam rock, and having grandmothers who taught us how to sew.

KXT: Speaking of theater, what’s the process for creating and producing your stellar live shows?

Siamese: We usually start with a visual concept we want to explore and then come up with ideas for set pieces, costumes and alter egos to create around that. For example one of our set themes is inspired by sci-fi horror films. Alonzo had this idea for a light installation, so we tore apart a friend’s coffee table (with their permission…sort of) and turned it into a circular infinity mirror. It looks like a wormhole prop from a ’60s space movie.

KXT: How has North Texas, or Dallas specifically, influenced your music?

Siamese: Dallas in the past couple of years has become a really exciting place to be making music, and art in general. There’s a very collaborative and supportive feeling in the air.

We just started working on a special show concept with The Tribe, which is a collective of actors, directors and playwrights in the Dallas theater scene who collaborate with other artists to incubate their projects and help them pull off their wild ideas. Our original idea with the band was to create these big shows with actors and choreography and a kind of rock opera narrative, so we’ve been super excited to have their help bringing it to life. It’s something we couldn’t have pulled off on our own, and that kind of interdependence is really rewarding for two communities that don’t often overlap — theater and music.

KXT: For kicks and giggles, if you had to pick, what do you think the new album would be the perfect soundtrack for?

Siamese: A friend of ours once described Siamese in these words: “This is what it would sound like if Brian Eno wrote a goth soundtrack to A Midsummer Night’s Dream.”

See Siamese at Summer Cut on June 3 at South Side Ballroom! Tickets here.