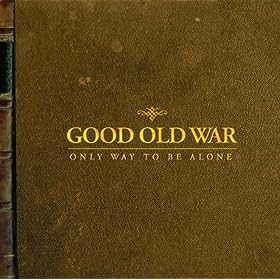 You might have heard “My Old Sinking Ship” on our airwaves, from Good Old War’s latest self-titled effort, but this song, the lead track from their 2008 release Only Way To Be Alone was the song that initially gained them critical acclaim. The band hails from Philadelphia, and their name from the last names of the three members: Good from Keith Goodwin, Old from Tim Arnold, and War from Daniel Schwartz.