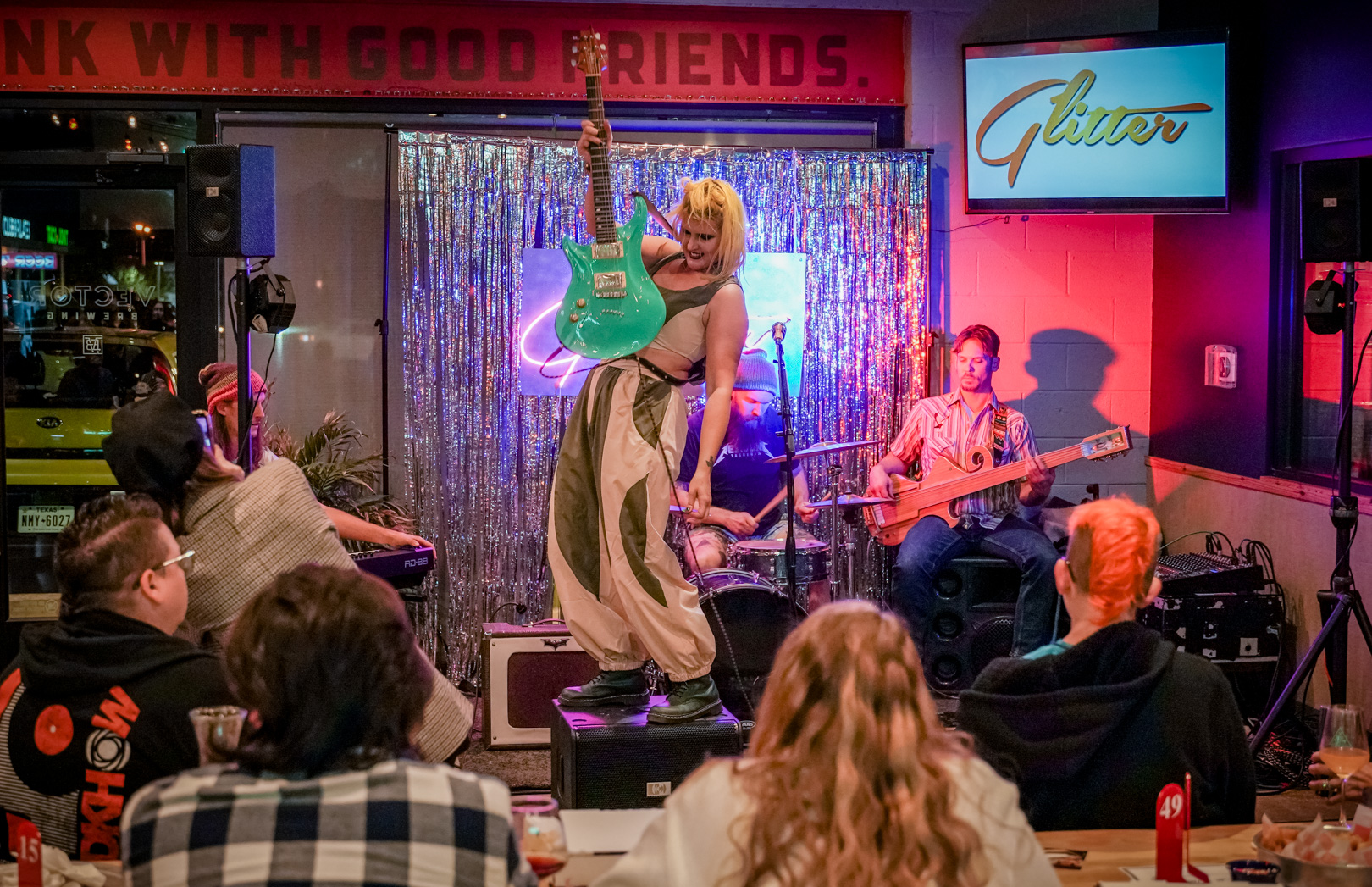 She’s got style, she’s got flair – her name is Glitter and she’s bringing character to her live music performances in North Texas.

Glitter hosted her self-titled EP release party at Vector Brewing on Sunday, supported by Remy Reilly, John Dufilho (The Deathray Davies) and his daughter Jane. The night started off the celebration with a screening of her two music videos from the EP, “Pretend Love” and “Middle.”

The four-track EP includes photography by Veronica Bradley, featuring a pillow fight photo shoot the band had at the Romantic Inn in Dallas. 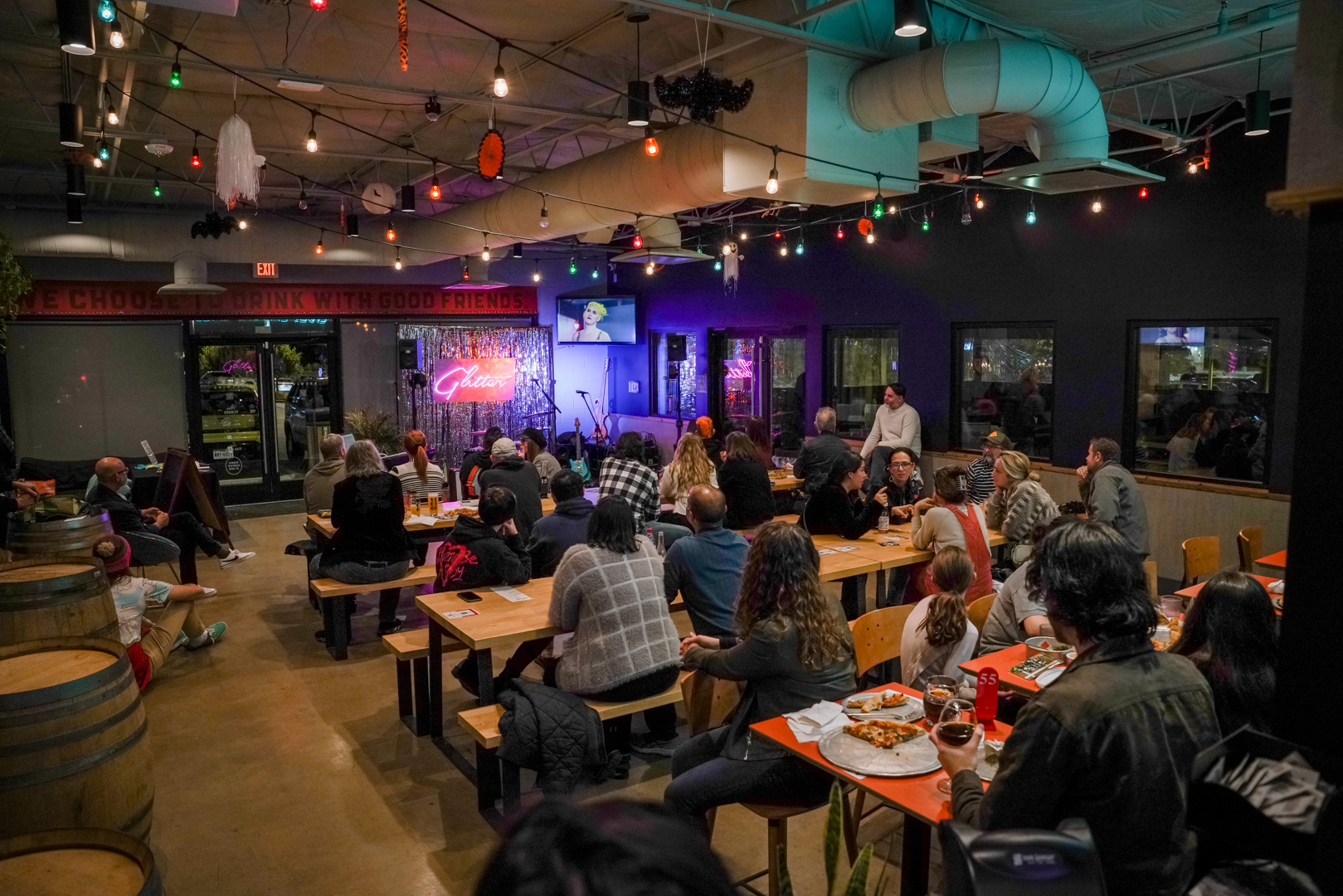 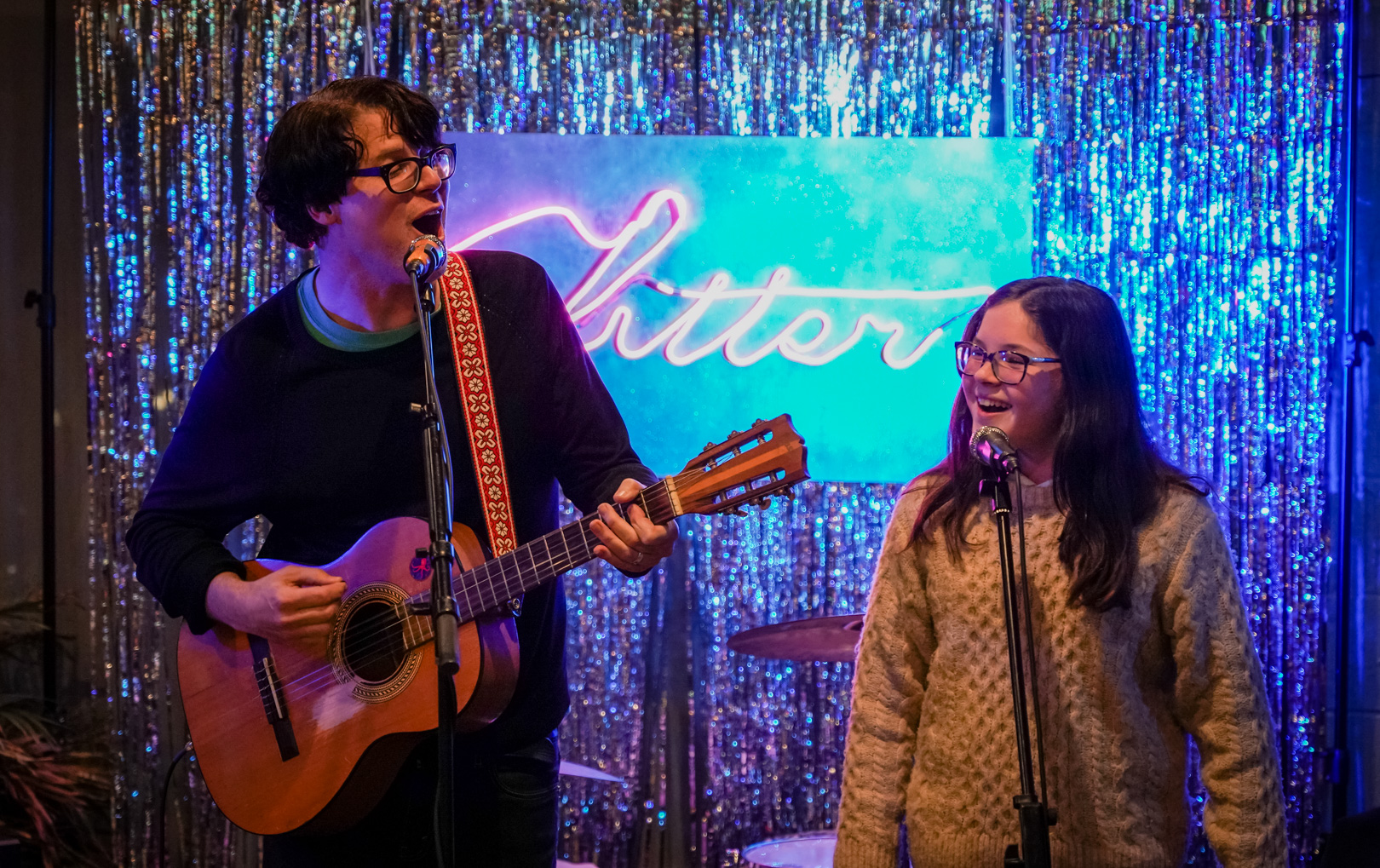 John Dufilho and his daughter Jane performed a couple of songs to open up the show. Photo: Jessica Waffles

Music fans may recognize this singer Glitter Rose, the moniker she used from 2012 to 2020 as a Southern Rock artist. She still uses it as her full professional name today.

“I moved to LA from Fort Worth back in 2012. At the time I had a manager that was a family friend. There were opportunities out there I wanted to explore,” Rose said. “At the time things like KXT in North Texas were just starting out, and we were looking for an outlet in a major market.” 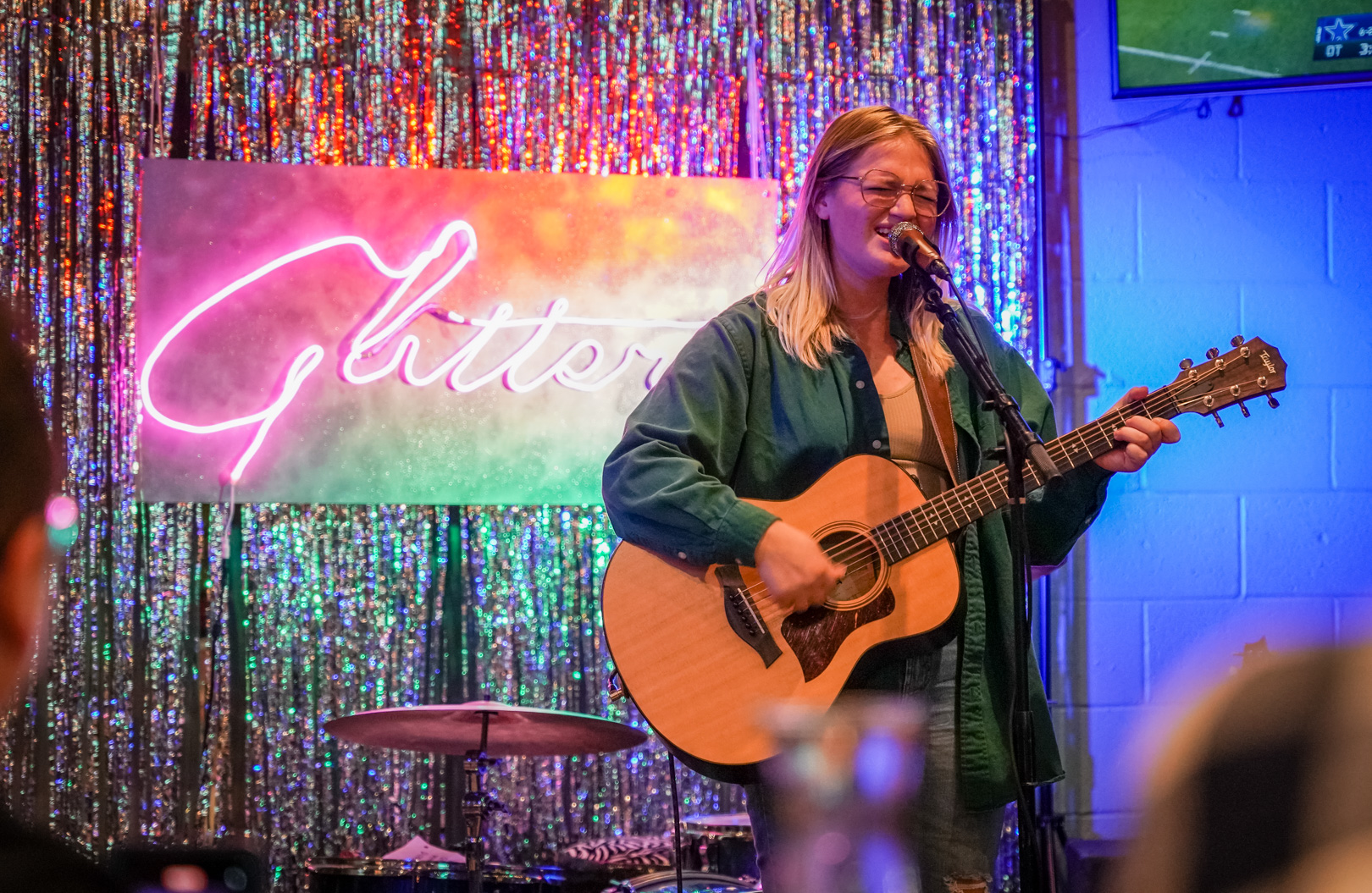 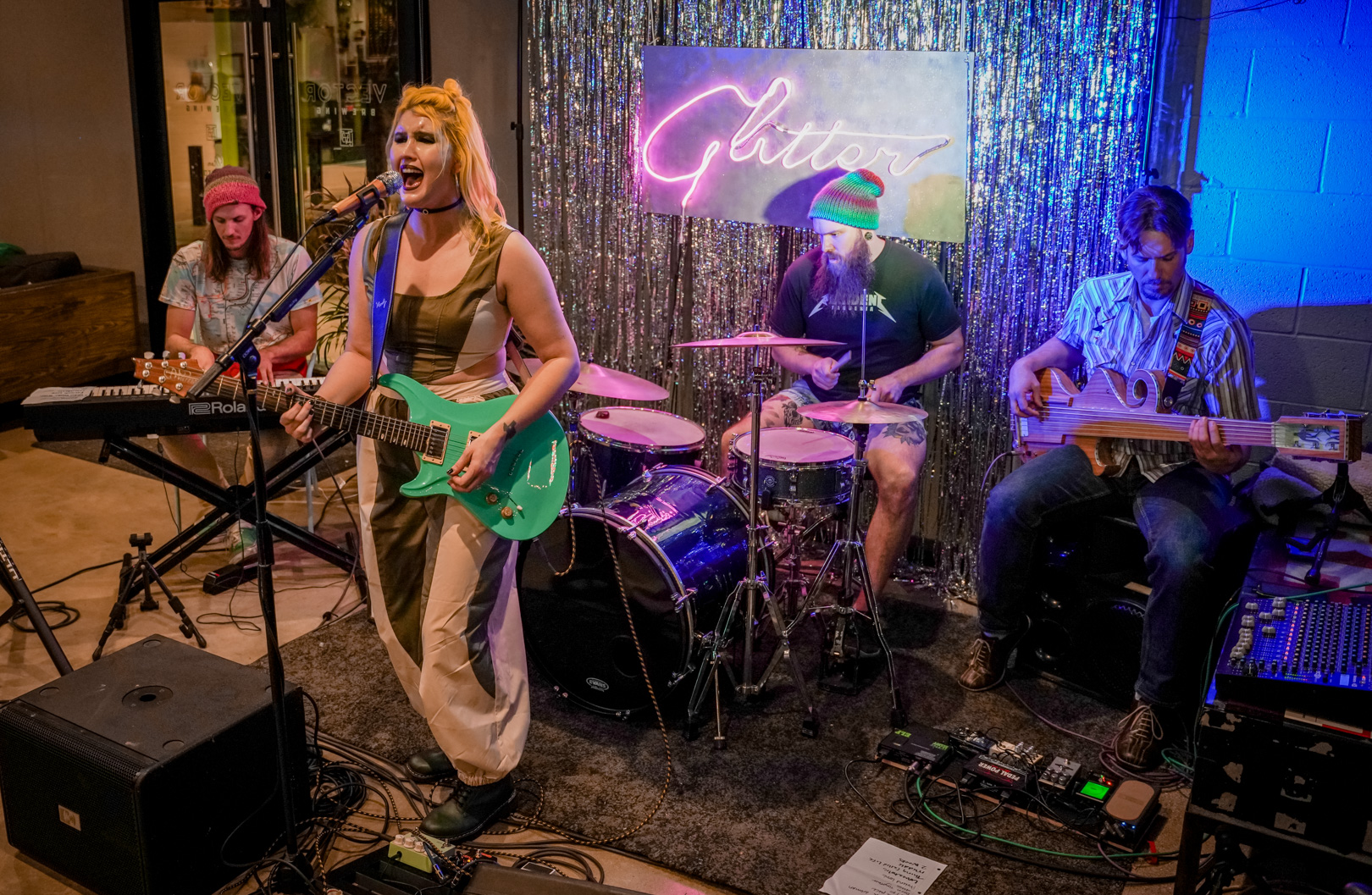 The change to drop the “Rose” from her artist persona came from the desire to present her authentic self to the way she approached music. She moved from Southern rock to indie pop-rock and never looked back.

“I was in a controlled environment of the style of music I was making,” Rose said. “It was time for me to direct myself rather than be directed by outside forces.”

Queue the pandemic. Just as Glitter was about to make a debut in LA, the world as we know it stopped. Ultimately, she moved back to Texas – now in Dallas – and began creating her vision in North Texas. 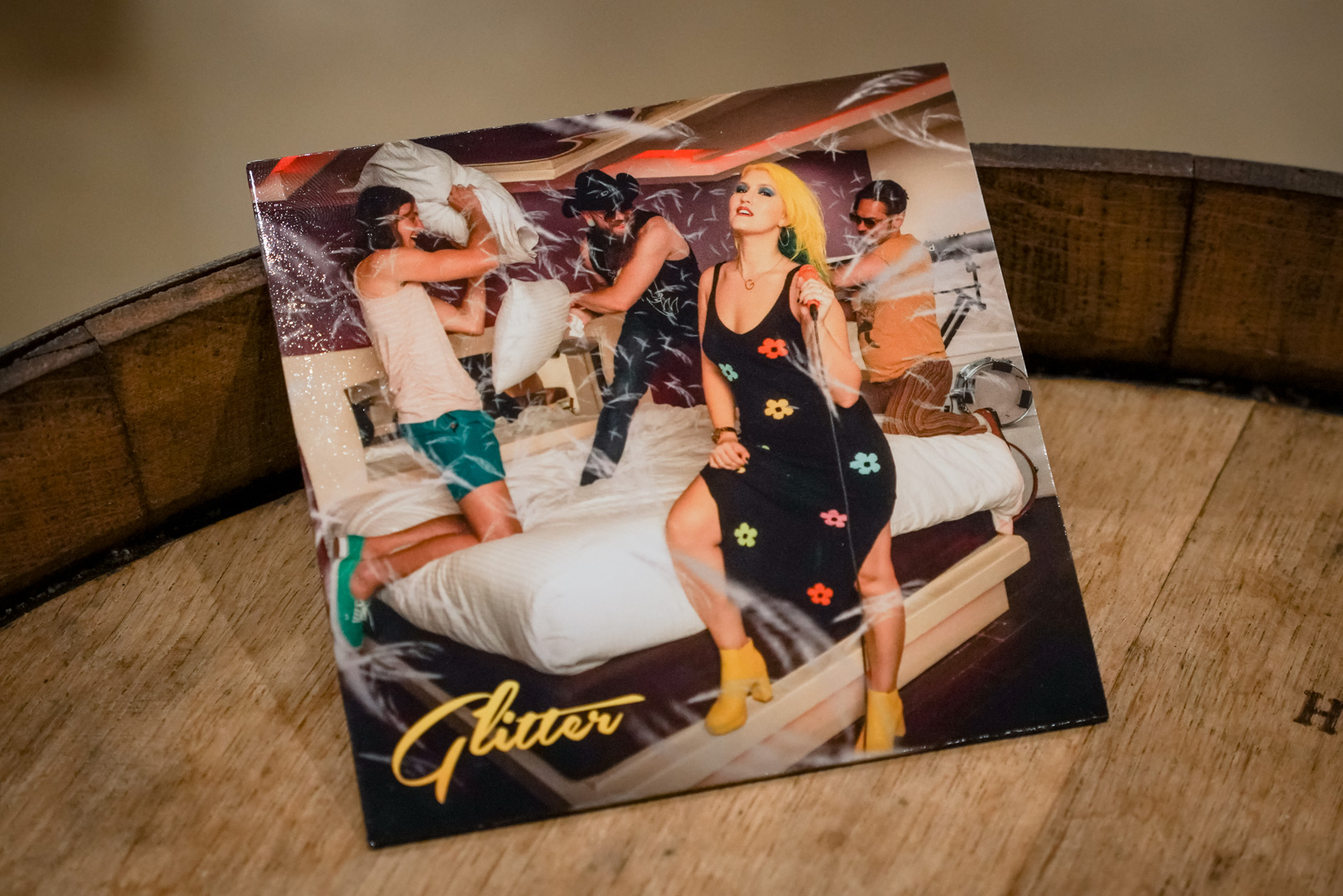 Glitter’s EP was available for purchase at the release show. The album art was shot by Veronica Bradley, who also is an owner of Vector Brewing. Photo: Jessica Waffles 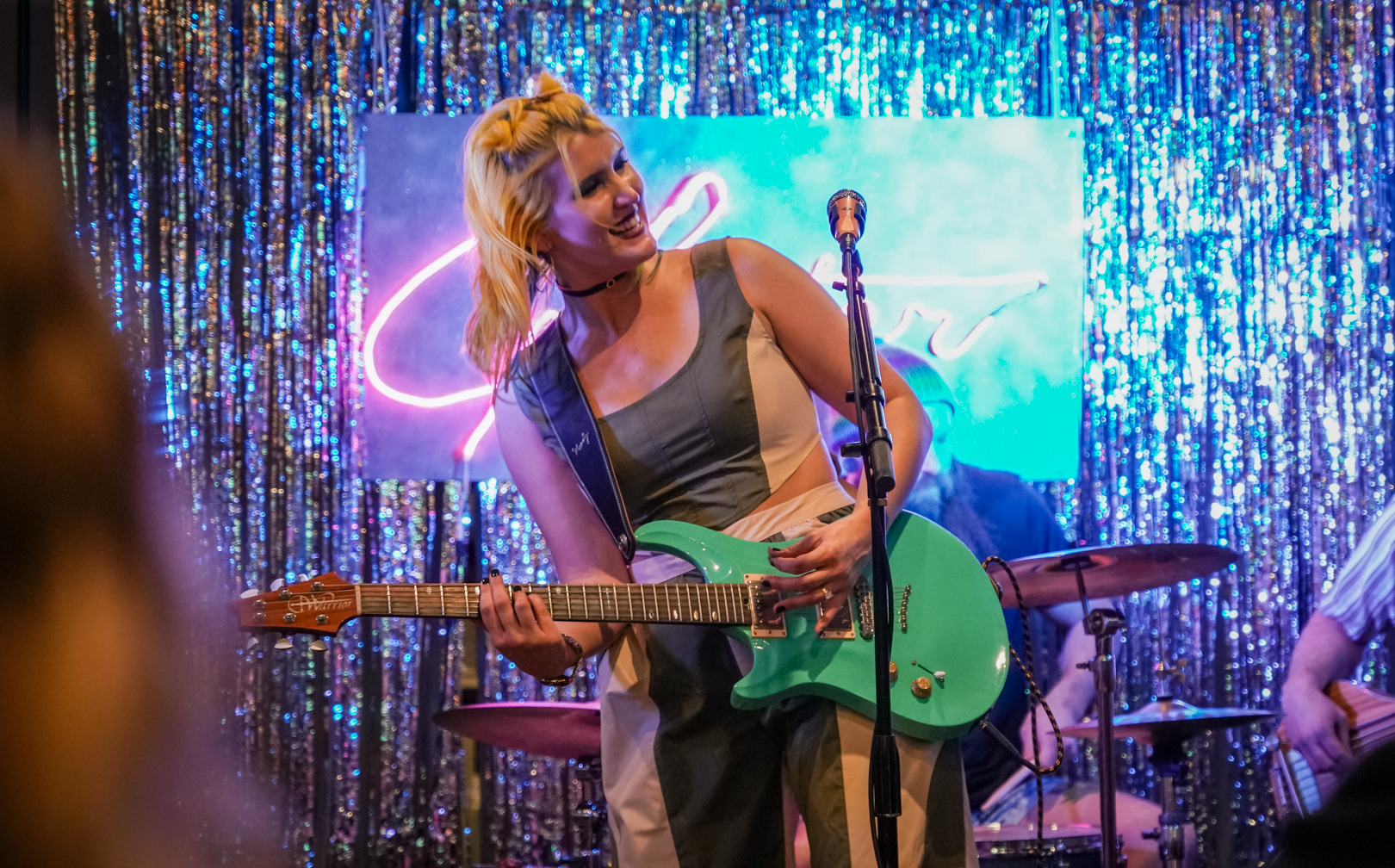 Glitter’s energy on stage is infectious, creating an immersive vibe in the space she occupies. Photo: Jessica Waffles

The first single under her new project “Pretend Love” dropped on June 1, 2022 and the music has had a steady roll out since then, culminating on the EP release.

Her seasoned professionalism and experience on stage can be felt in her performance, as she rips through guitar solos and creates an energy that fills the room.

Music from the EP was produced by Dufilho and Salim Nourliah, recorded at Pleasantry Lane Studios in Dallas. 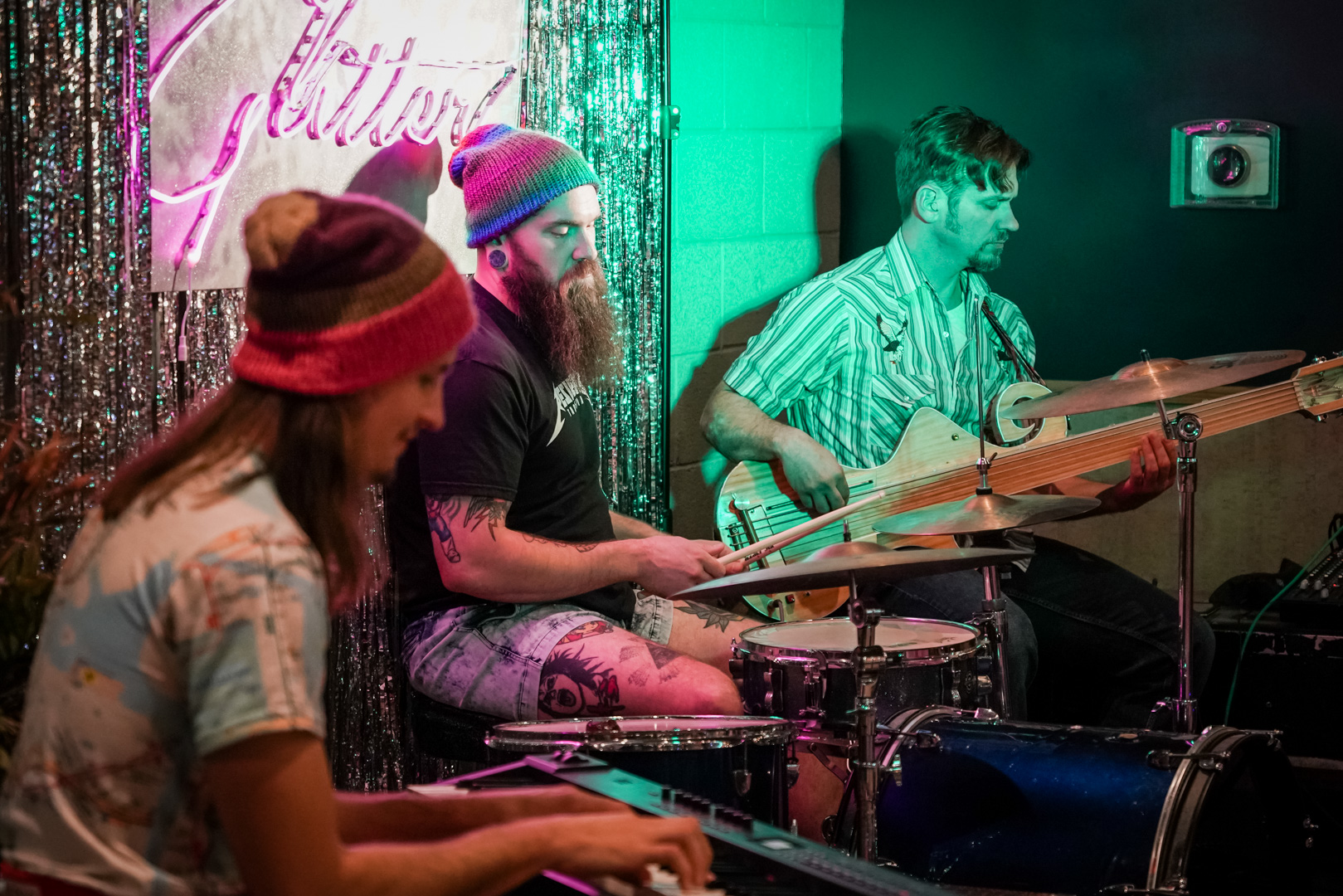 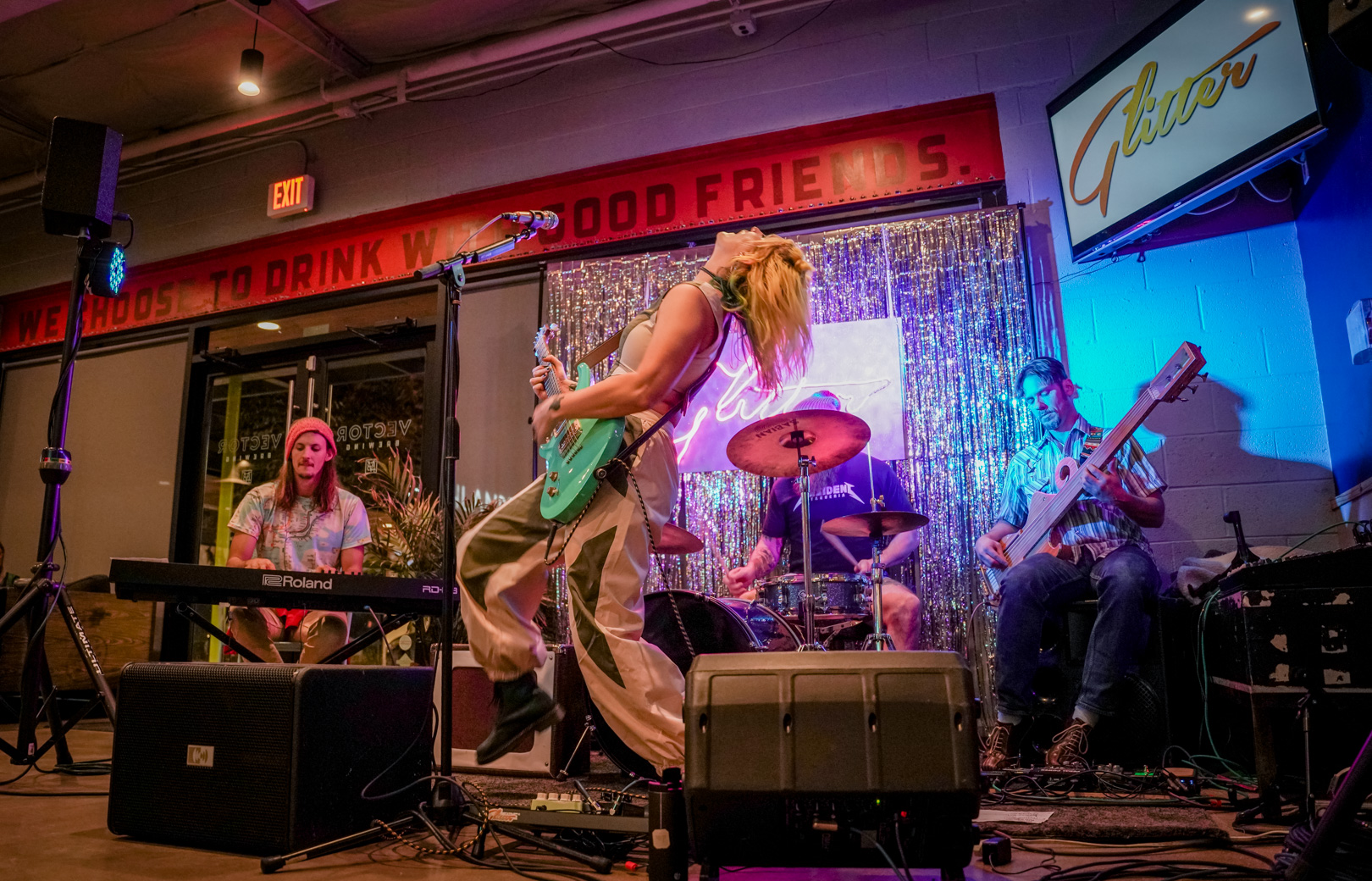 Glitter is going back into the studio in the next season, planning to record five to six more songs.

“I’m ready to put more material out there. Gotta give the people what they want!” Rose laughed.

As for upcoming shows, fans can find her hosting the songwriters in the round every second Friday at Opening Bell Coffee. The next one on December 9 will be a special event with Lorena Leigh, Alexandra and Glitter playing original holiday music.

Watch Glitter’s latest music video for her song “Middle” below, featuring Glitter doing her own stunts in a boxing ring. 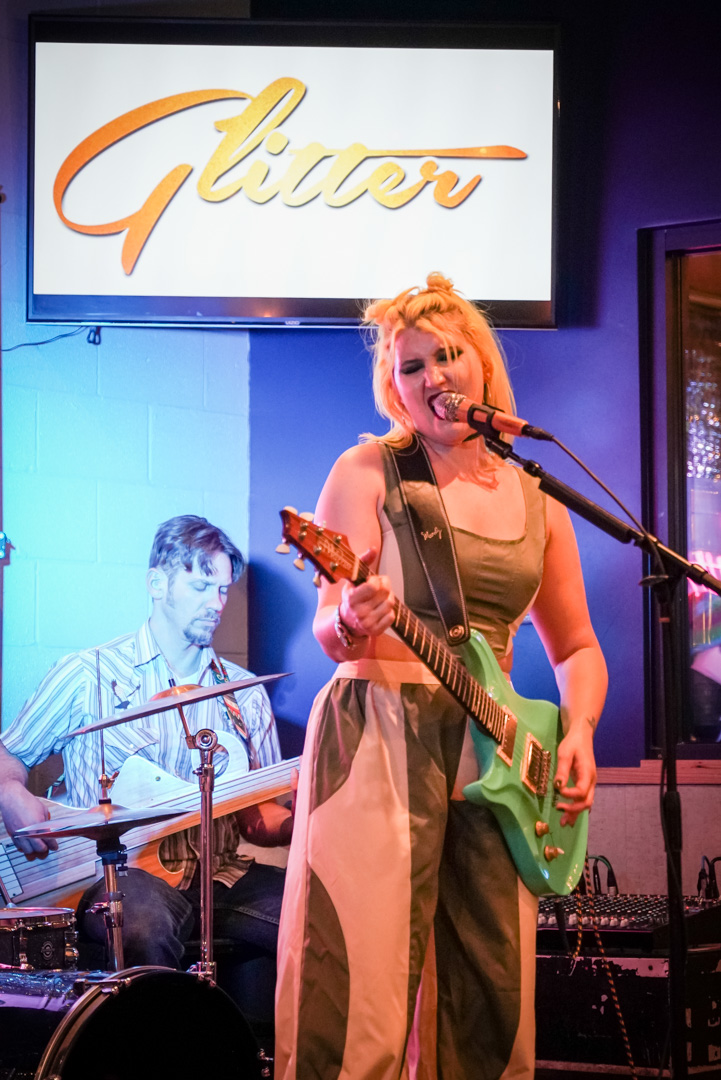 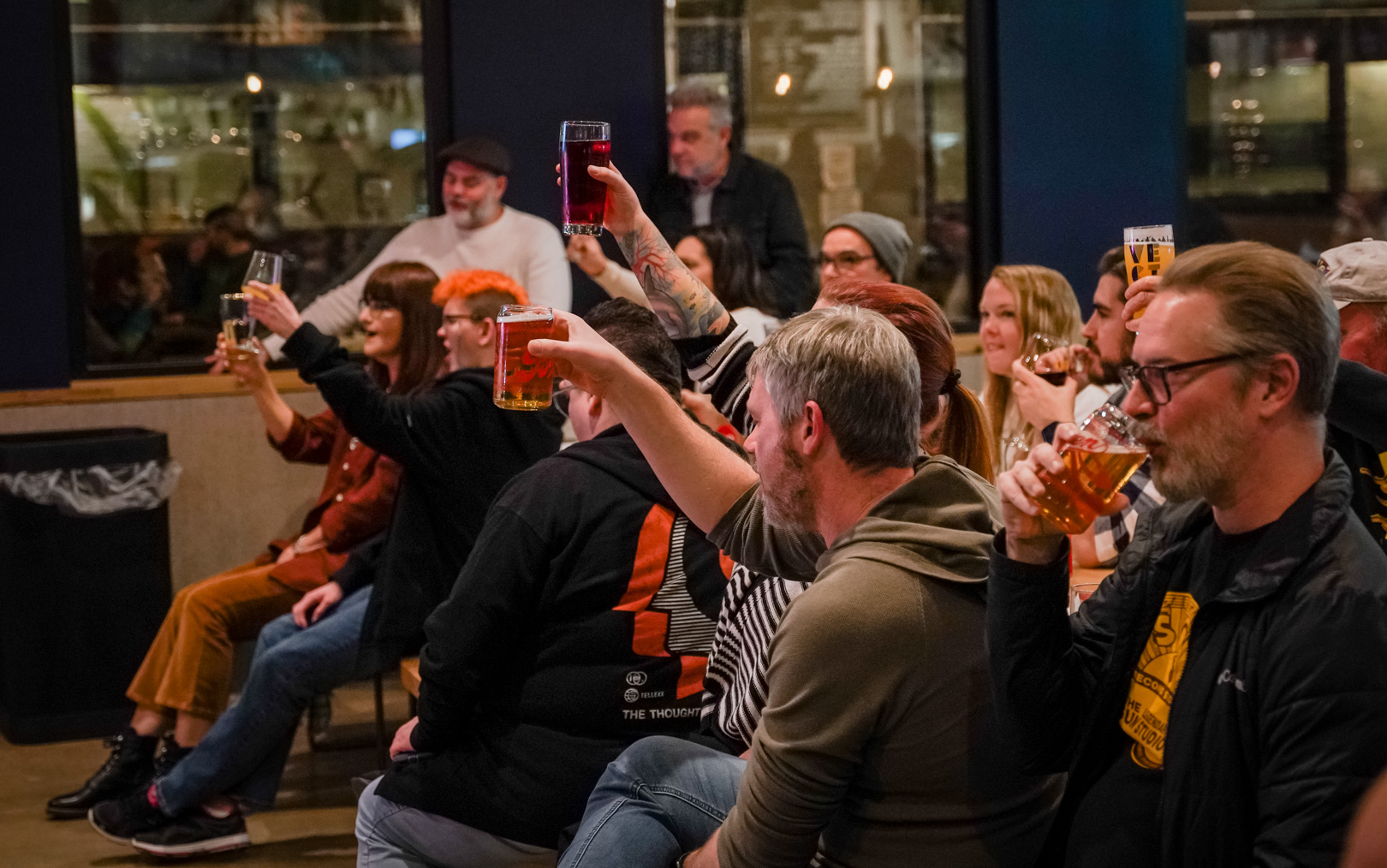 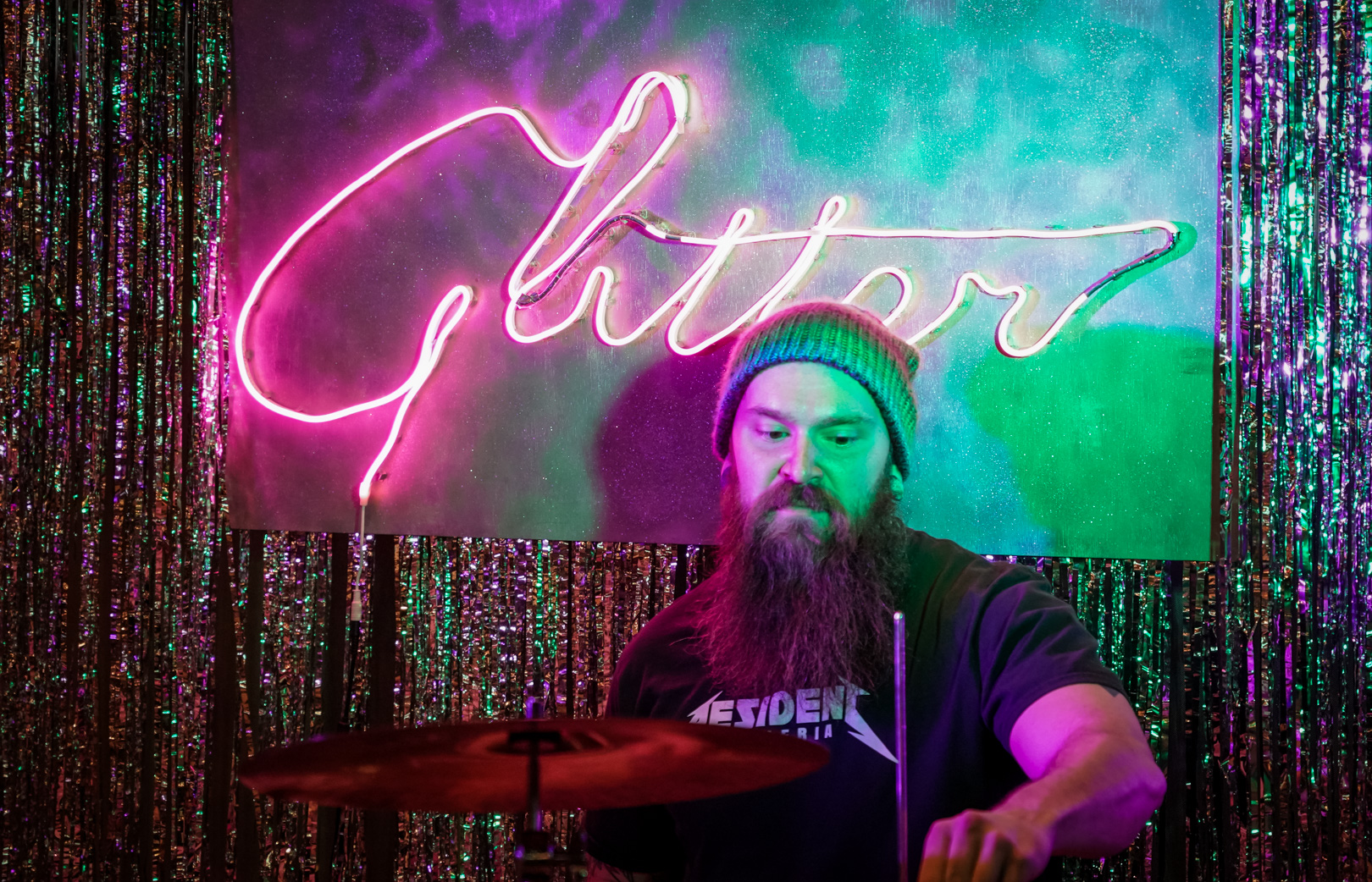