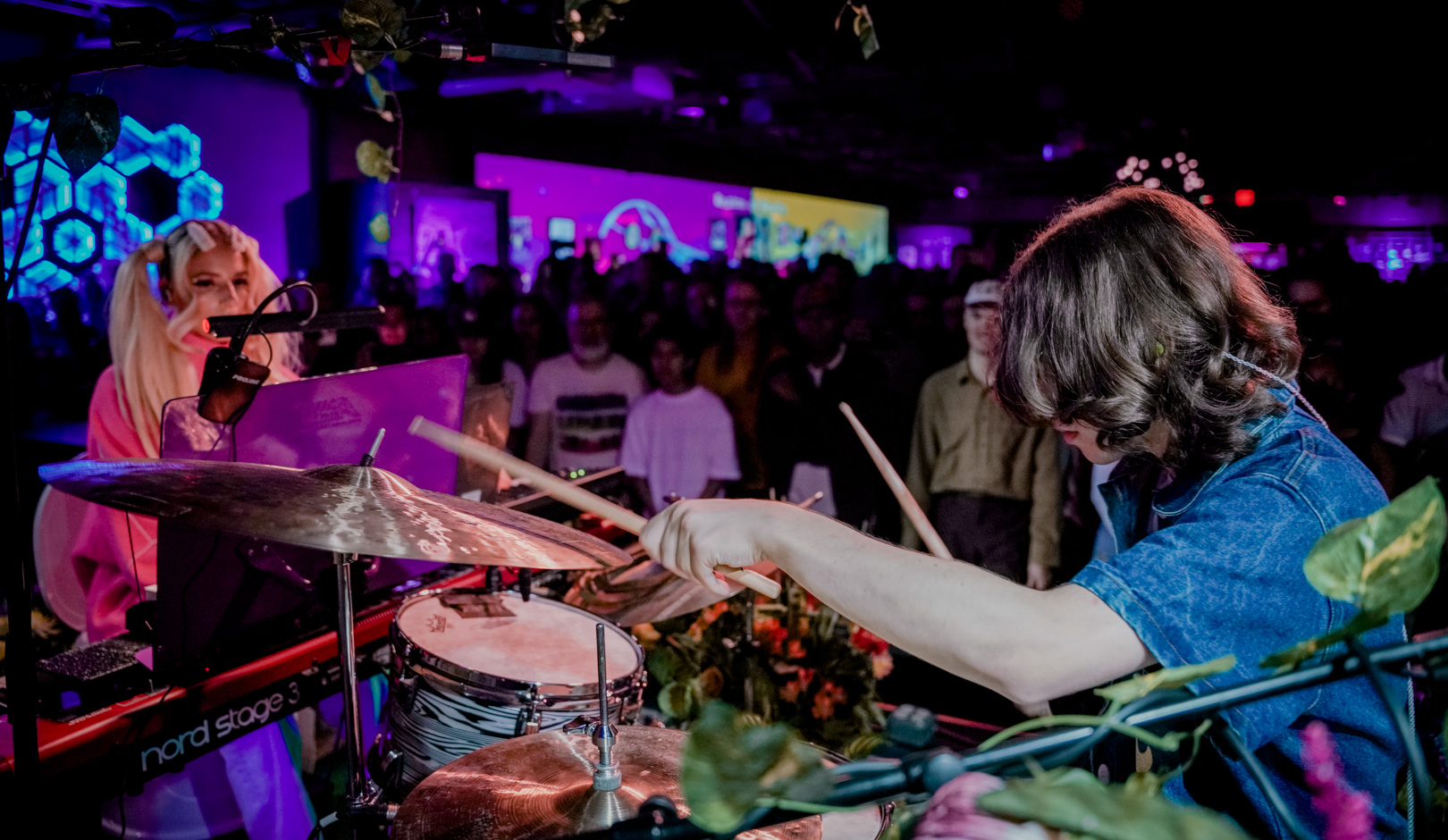 DOMi & JD Beck’s first stop of tour was a sold-out homecoming show in Dallas, where the Beck grew up and the two began collaborating in 2018. Photo: Jessica Waffles

Disruptive jazz duo DOMi & JD Beck started their debut album NOT TiGHT tour in Dallas on Monday night, playing to a sold-out crowd at Deep Ellum Art Company. The stage was designed with decor from their album cover (which was also featured in their NPR Tiny Desk performance), complete with immersive florals and greenery, some of which DOMi hung herself at the top of the stage while standing on a chair.

The show was a homecoming of sorts, as the two hadn’t played in Dallas in three years. In that time, they’ve gained international recognition – collaborating with Anderson .Paak, Thundercat, Snoop Dogg, Busta Rhymes, Mac Demarco, and the one and only Herbie Hancock – to name a few.

In July of this year, DOMi and JD Beck released “NOT TiGHT” on .Paak’s APESHIT label in partnership with Blue Note Records. Their music finds both humor and greatness in harmonic complexity and rhythmic shiftiness, abruptly adopting and ditching tempos, toying with time signatures, and sneaking extra beats into bridges. They offer winking breaks and gleeful pivots, but the album is more composed than anything they’ve done before, toying with pop structures and pretty restraint.

The duo first played together in 2018 at NAMM in Anaheim, brought together by Robert “Sput” Searight of Snarky Puppy – after Searight had seen the two talents separately and decided to invite them both to play a jam session during NAMM. The two became fast friends, bonding over gauche keyboard FX and mom jokes.

Over the next year and a half, they wrote and recorded much of the album at Beck’s house in Dallas on drums and a 49-key MIDI board with just a few microphones. 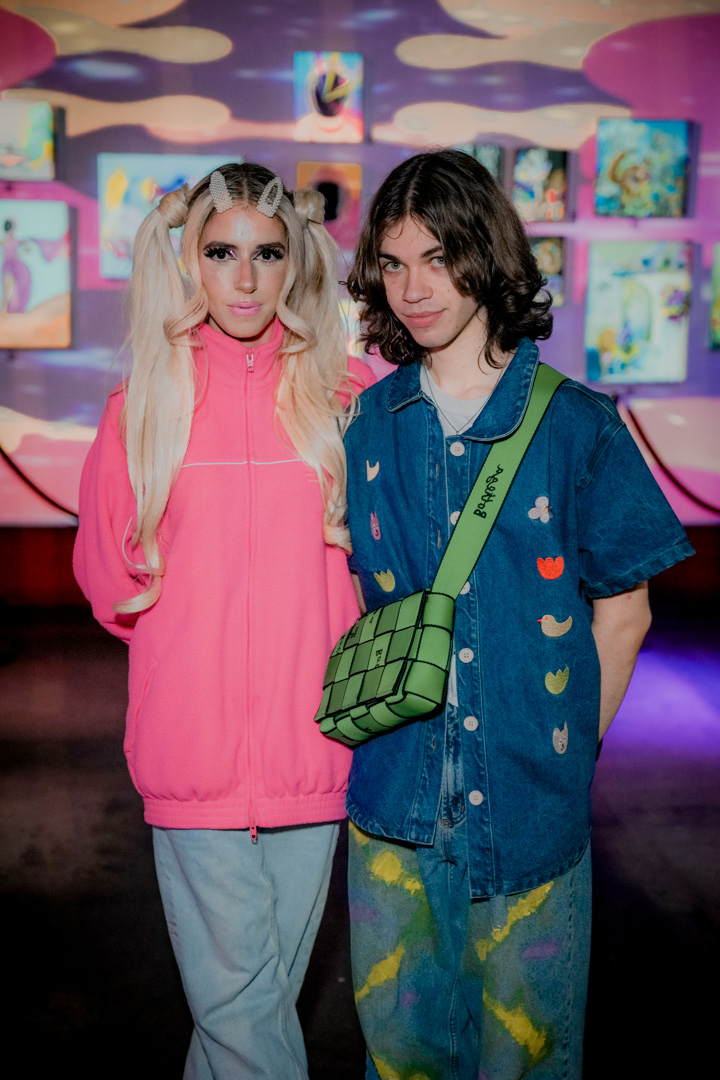 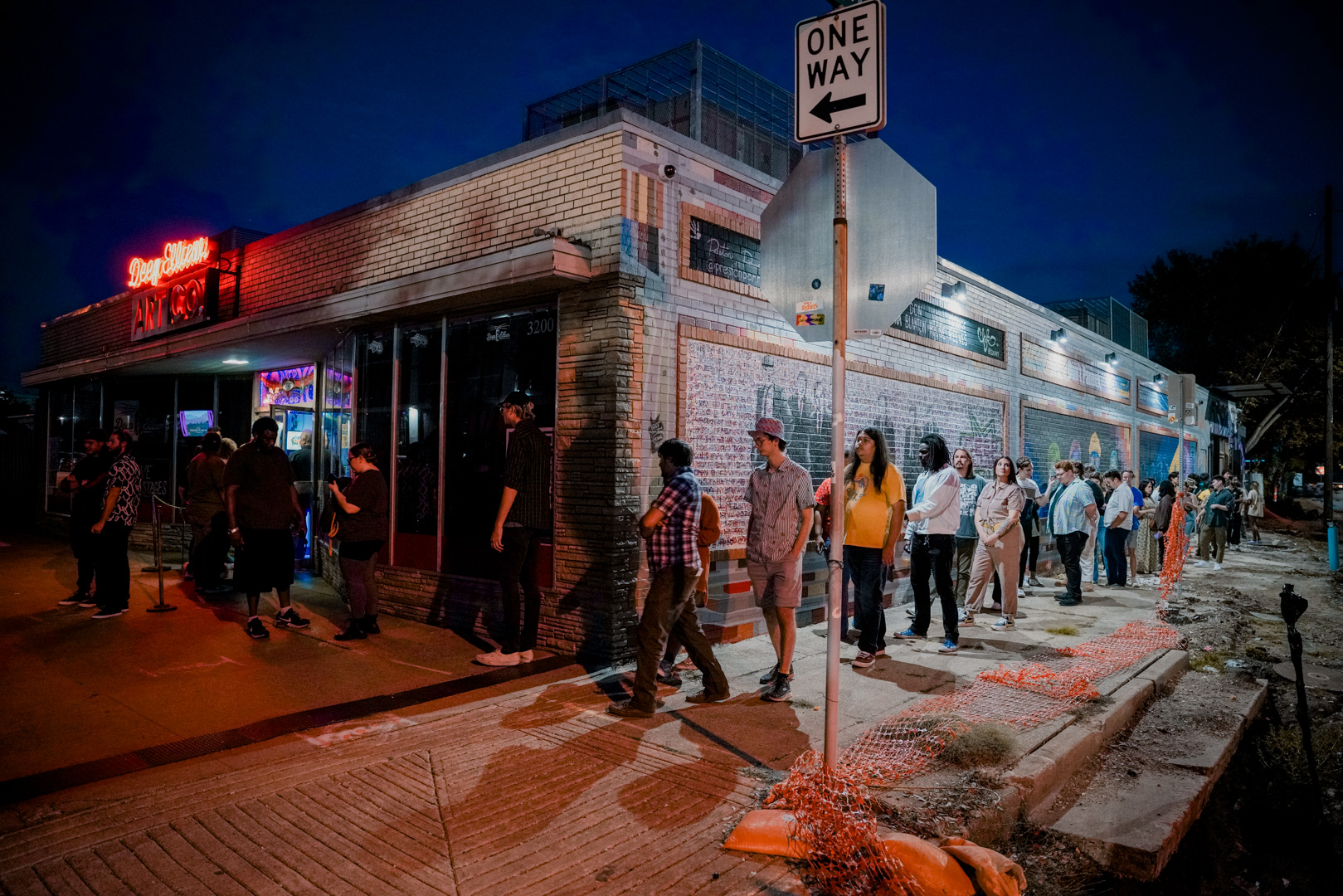 The line to get into the show at Deep Ellum Art Company wrapped around the building on Monday night. Photo: Jessica Waffles 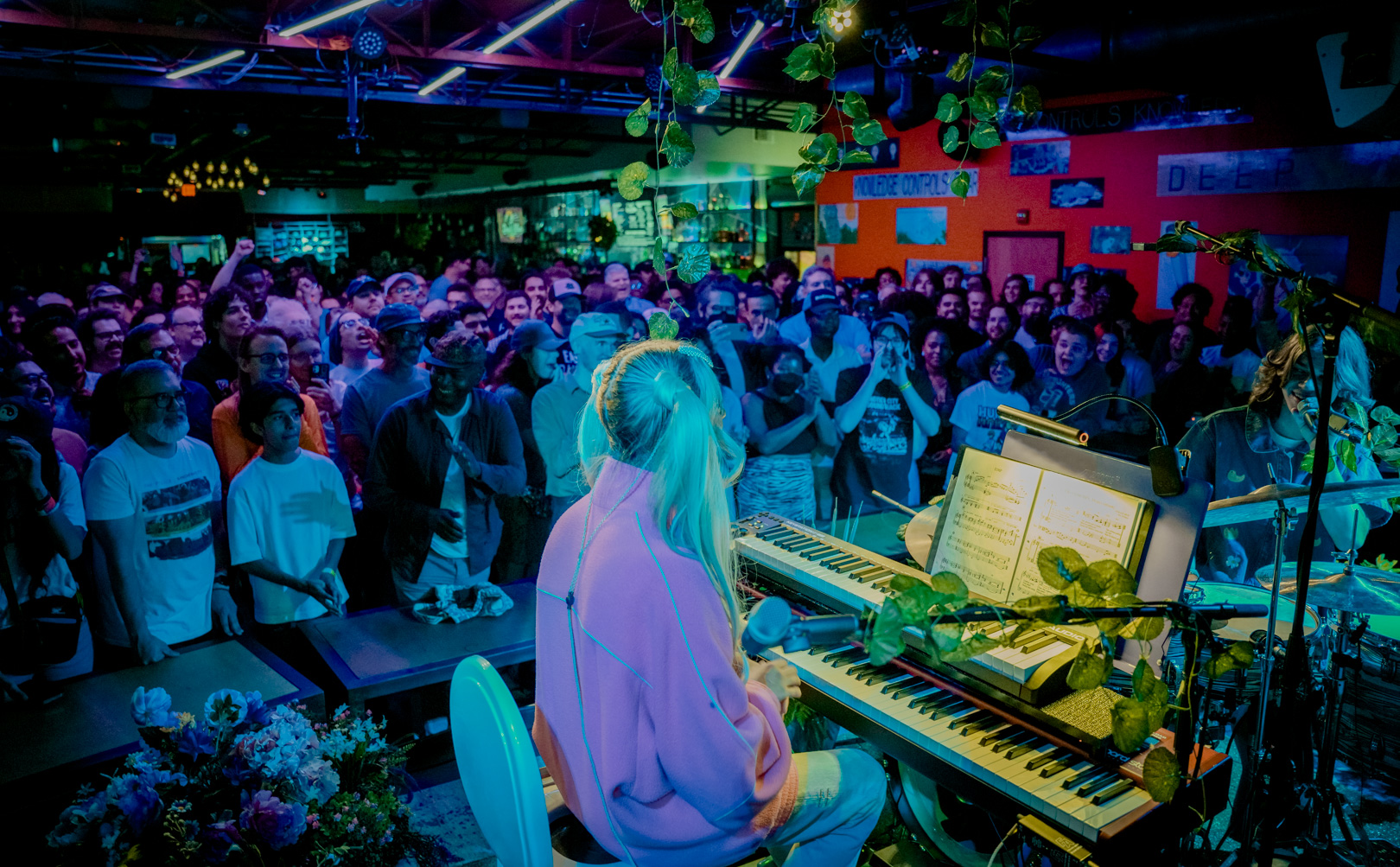 The crowd was eager to get to see the dynamic duo DOMi and JD Beck. Photo: Jessica Waffles

Former booking agent at The Common Table Matthew Kurzman (of Front Yard Concerts) was in attendance at the show, and offered some insight into the beginning years of DOMi & JD Beck.

“It was probably about 2018 to 2019 that I was [booking] at Common Table,” Kurzman said. “I had booked Mike Mitchell, who was one of my favorite drummers, and he brought DOMi with him. And I was immediately struck by her remarkable playing; but several song into the performance, I realized she was reading from her laptop beneath the keyboard. And it took a moment to hit me that she was improvising the music at the same time that she was reading it. And I thought, ‘Wow. That’s an amazing talent.'”

As soon as Mitchell took a break that night, JD Beck jumped on the drums. Kurzman was impressed with the jazz funk style the two had together, and noted the hip hop influence he saw throughout their playing.

“I only booked them twice before they went to LA right before the pandemic and they started blowing up,” Kurzman said. “Next thing I knew, they were touring with Thundercat as his backing band, and working with Anderson .Paak. Honestly, if JD and DOMi didn’t have as much influence from hip hop as they did from jazz, I don’t think they would have introduced so many young kids to jazz.” 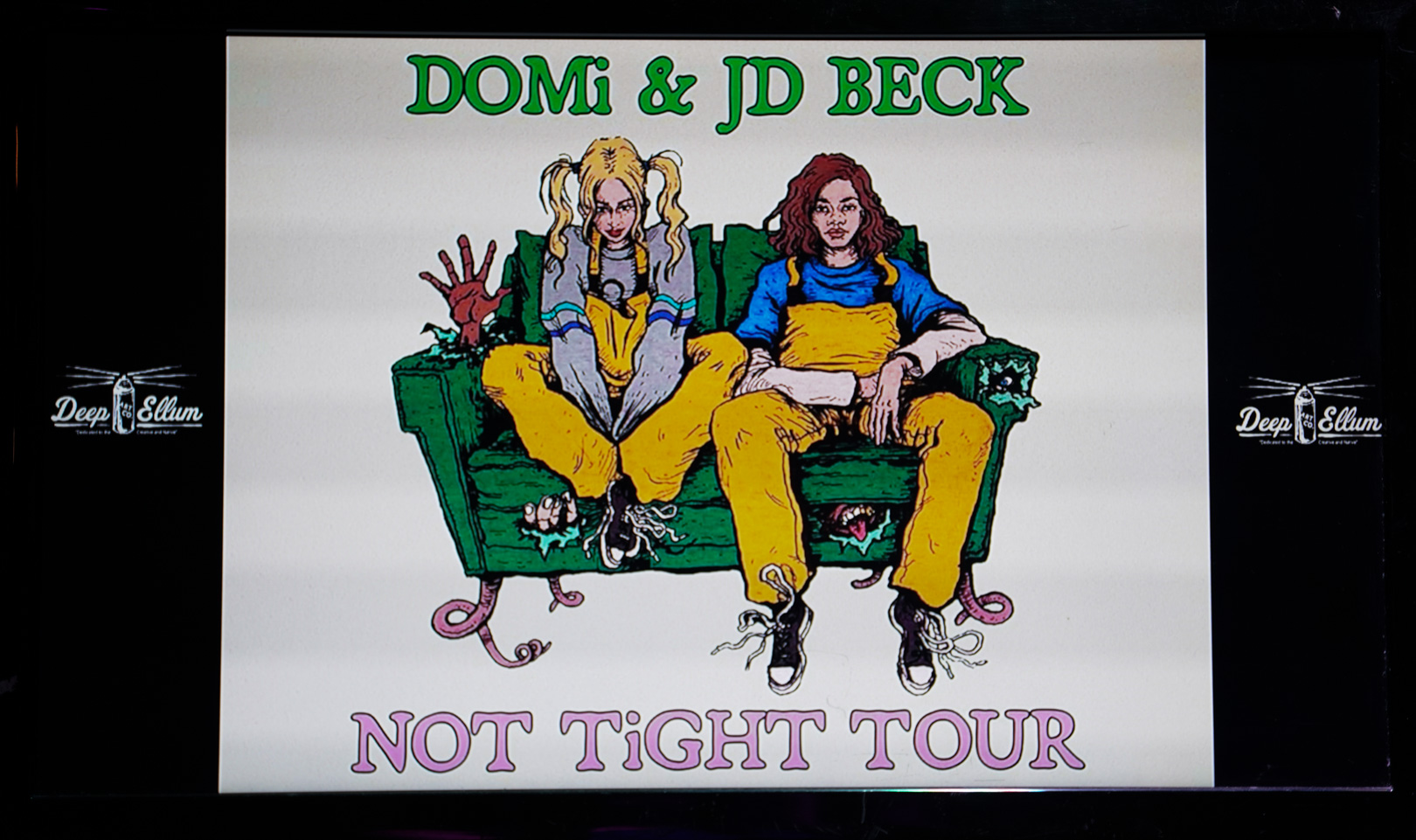 The imagery for the DOMi and JD Beck NOT TiGHT Tour was featured on the screen at the show’s entrance, designed by McKay Felt – who also works with Thundercat. Photo: Jessica Waffles 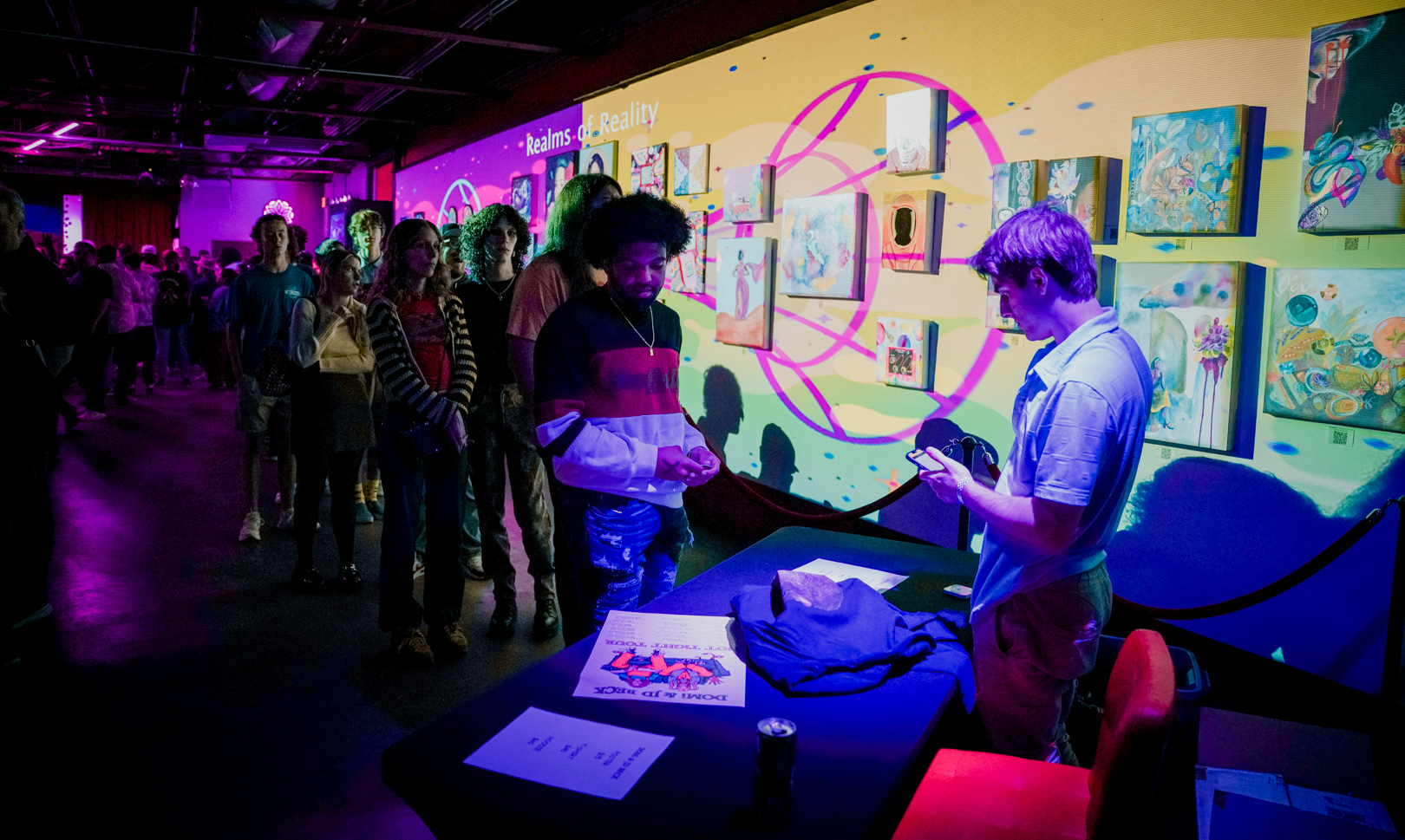 The line for merch never seemed to stop, as fans lined up before and after the show to sang a piece of swag. Photo: Jessica Waffles 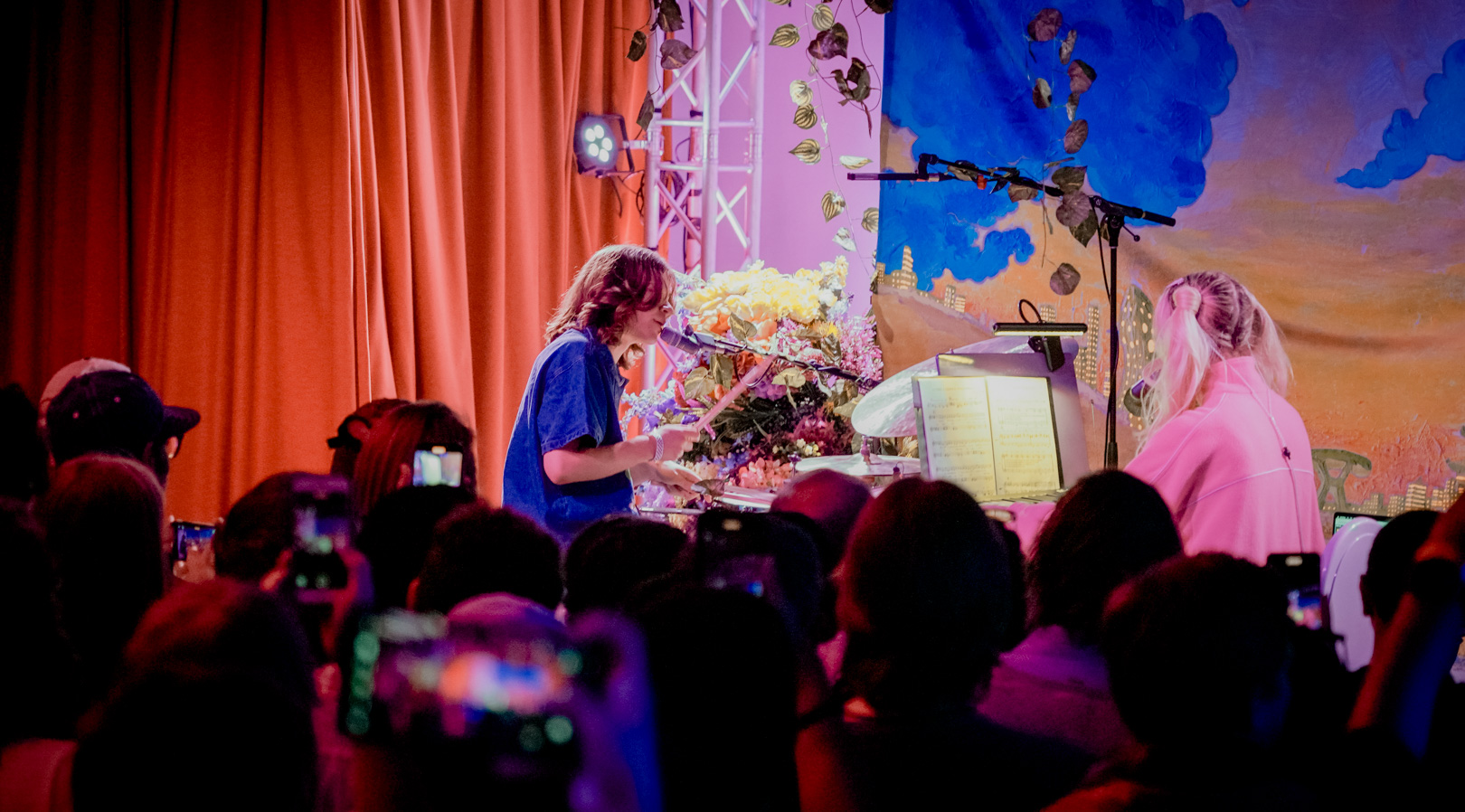 JD Beck’s family came out to support, including his parents and grandma. Photo: Jessica Waffles

At just 19 and 22 years old, JD Beck and DOMi have captivated the world at large.

Domi was born in Metz, France and by age five was studying music at Conservatoire Régional du Grand Nancy. She then went on to Conservatoire de Paris followed by Berklee College of Music in Boston where she graduated in 2020. Domi first began playing drums at the age 2 before switching to keys at 3 years old.

Beck also started lessons around the age of five, enrolling in various music programs throughout his preteen years around his hometown of Dallas. By 10, Beck was playing with Cleon Edwards of Erykah Badu’s band, and Robert “Sput” Searight of Snarky Puppy was his mentor.

Domi and Beck first met .Paak (whom they refer to as “Andy”) in 2019 when they were playing a gig as a part of Thundercat’s band in New Orleans. The three of them remained connected and before long they were working together on NOT TiGHT.

.Paak directed the music video for “TAKE A CHANCE”, which the three of them performed live together on “Jimmy Kimmel.” .Paak also gave them songwriting credits on the roll-bounce funk tune “Skate” for his GRAMMY-winning project with Bruno Mars, Silk Sonic, the bones of which were an instrumental from Domi and Beck.

“Most music isn’t about music anymore. It’s just used as a tool for money and selling bullshit. Hopefully we can help change that,” the band said in an interview with Grammy Awards. “It’s also fun reading all the social media debates arguing into which genre or style we should be categorized! It’s very entertaining.” 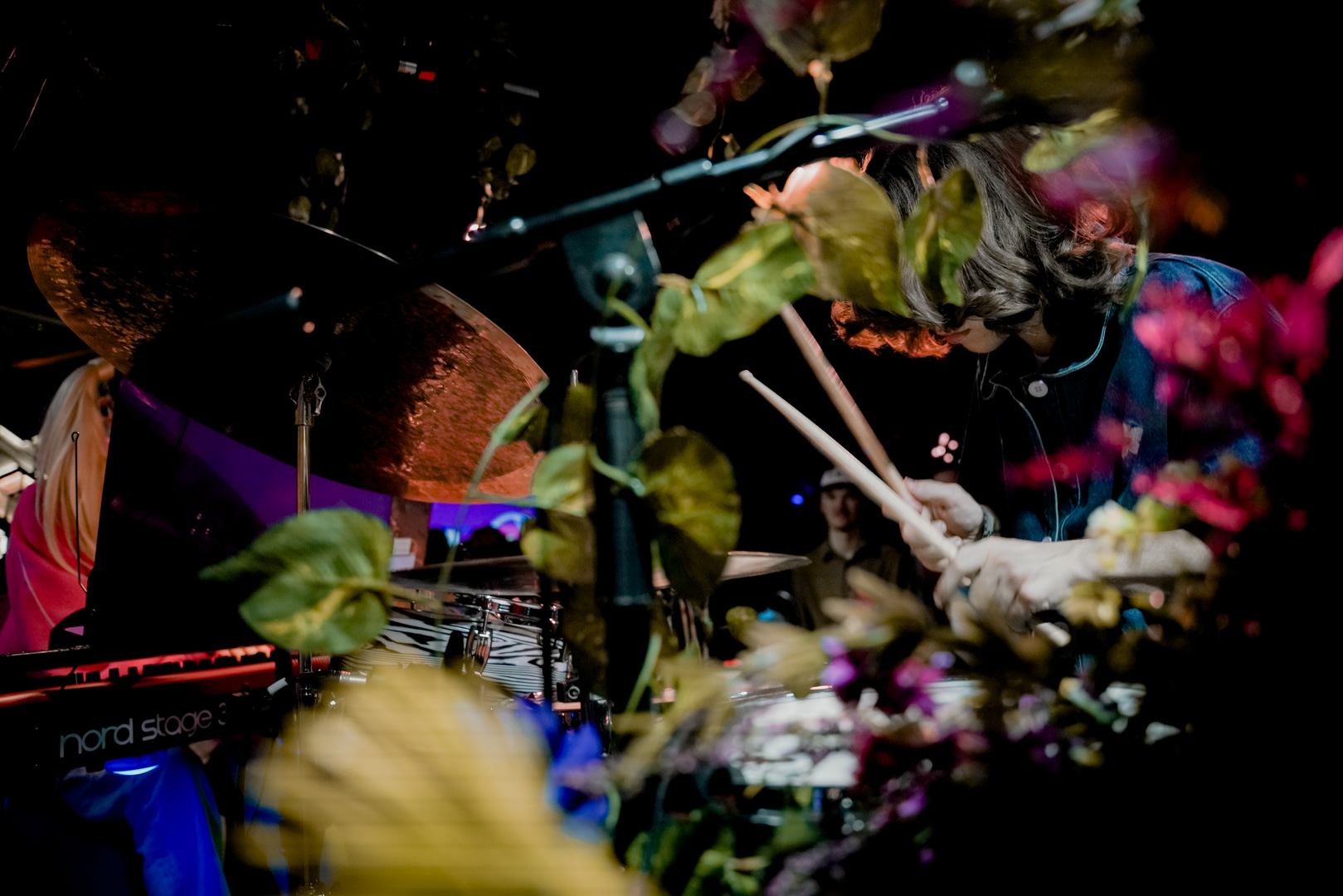 JD Beck’s performance carried the ease of a master, with his skill and lighthearted stage presence on display. Photo: Jessica Waffles 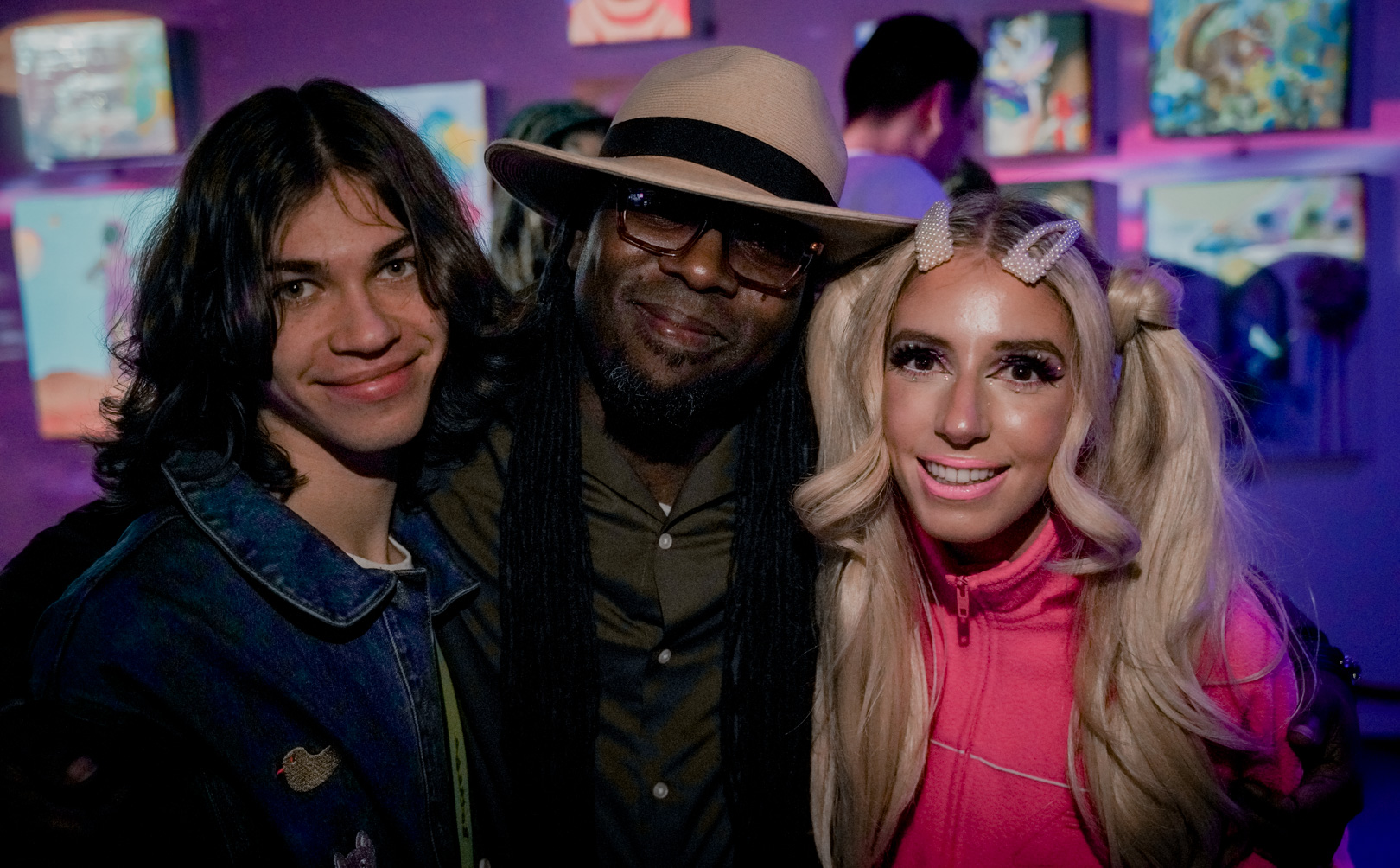 “Sput” a.k.a. Robert Searight II of Snarky Puppy made an appearance at the show to support the young musicians he had taken under his wing years ago. Photo: Jessica Waffles 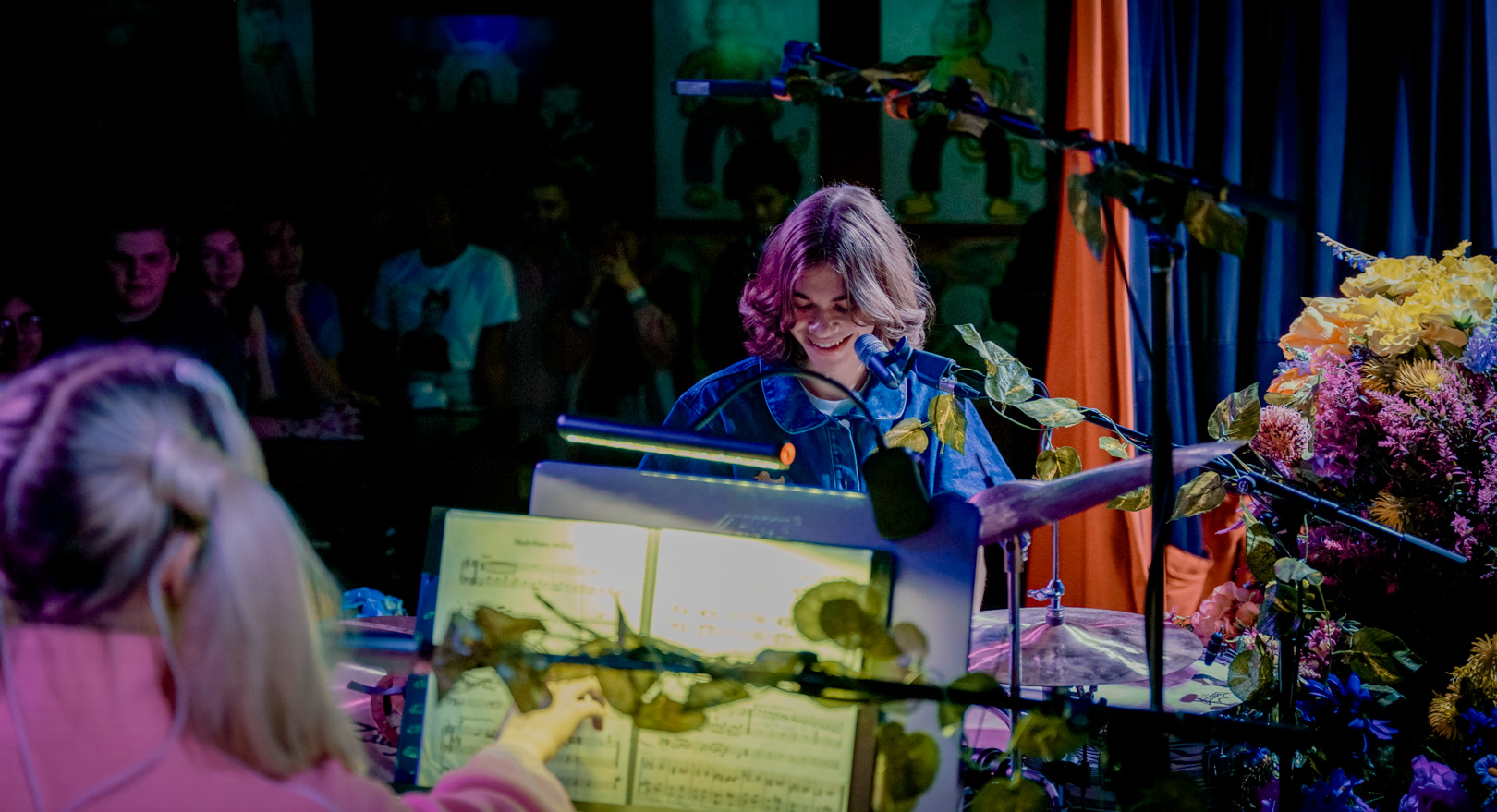 Monday night was all smiles at the sold-out Dallas show. Photo: Jessica Waffles

NOT TiGHT was released in July 2022 and has 15 songs, including their single “SMilE,” whose music video directed by .Paak tells a story of an old jazz musician (played by Mac Demarco) who loses his hearing, finding joy in small things with Beck and DOMi. The video has cameos from Thundercat, .Paak and more.

Their show is humorous and entertaining, reflected in their tour promotional material at reads, “To be a fan of DOMi and JD BECK is to be constantly reminded of testicles.”

DOMi might put it best when she says, “My philosophy of life is don’t take shit too seriously.” 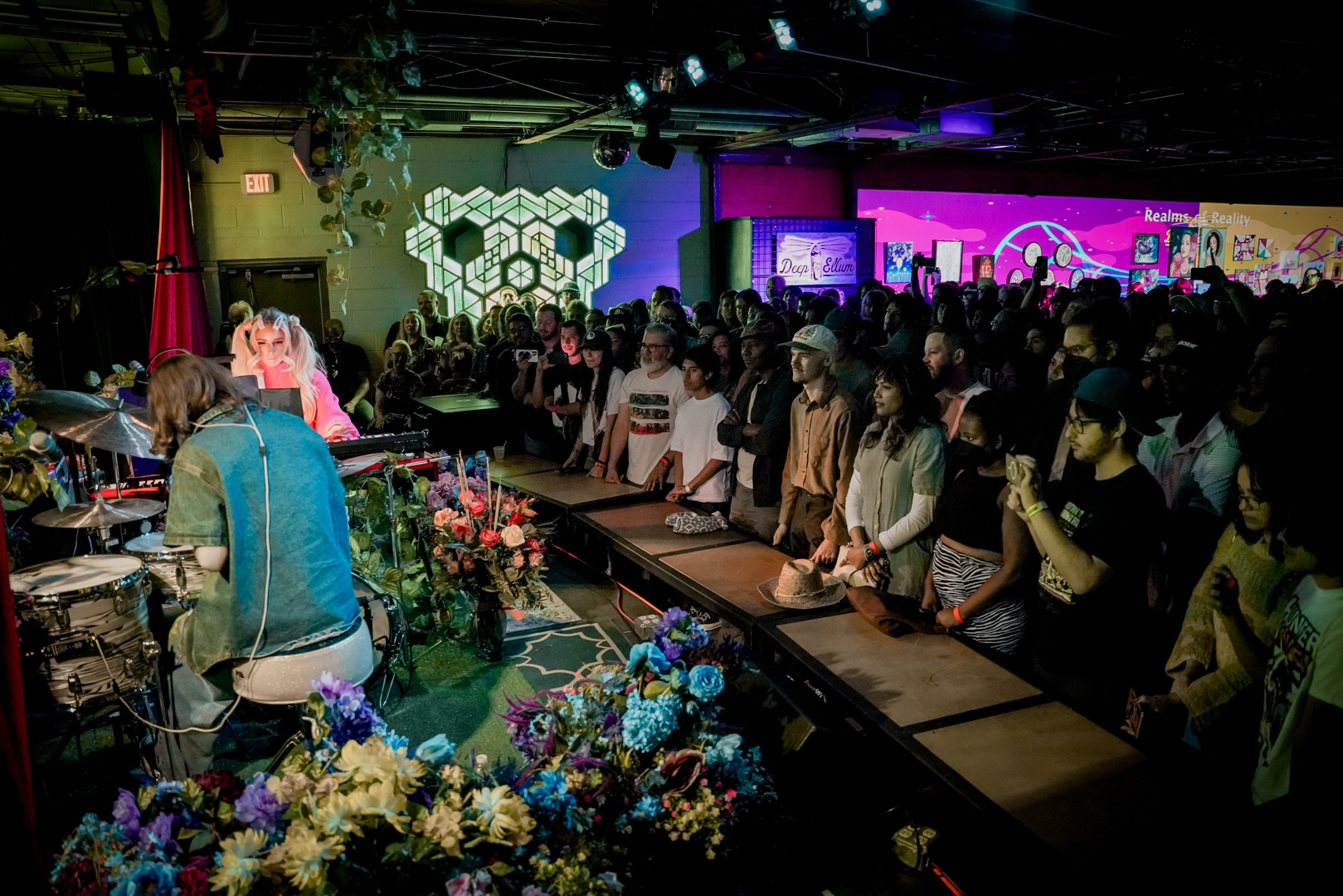 It was difficult to see over the crowd unless you were at the front or side of the stage. Photo: Jessica Waffles 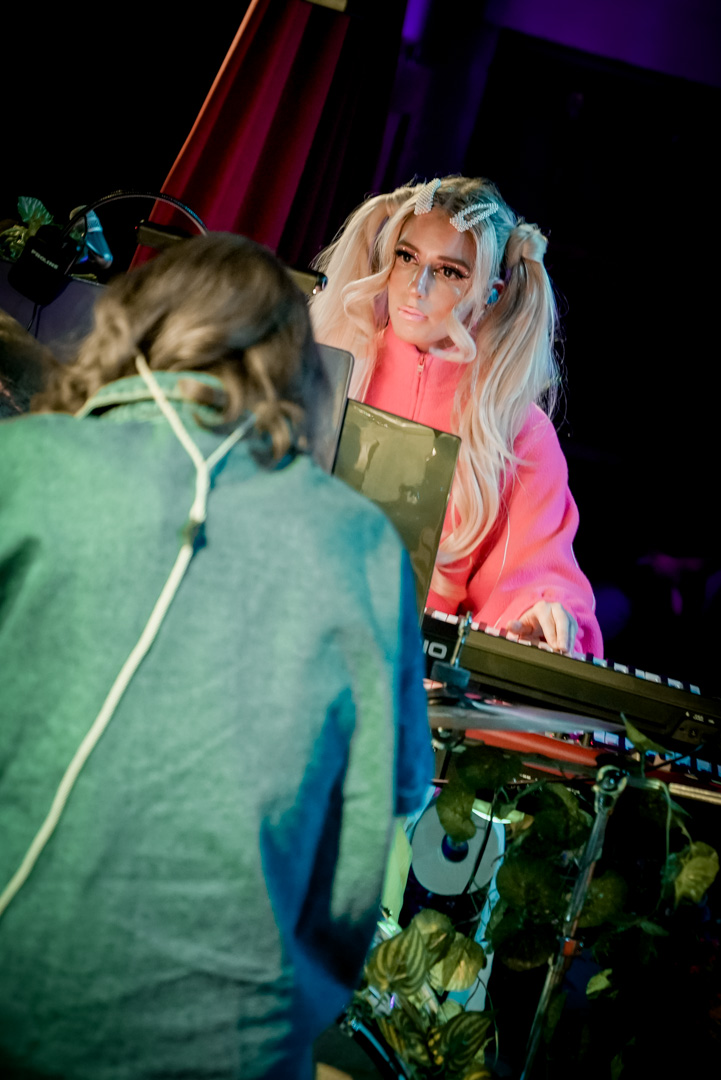 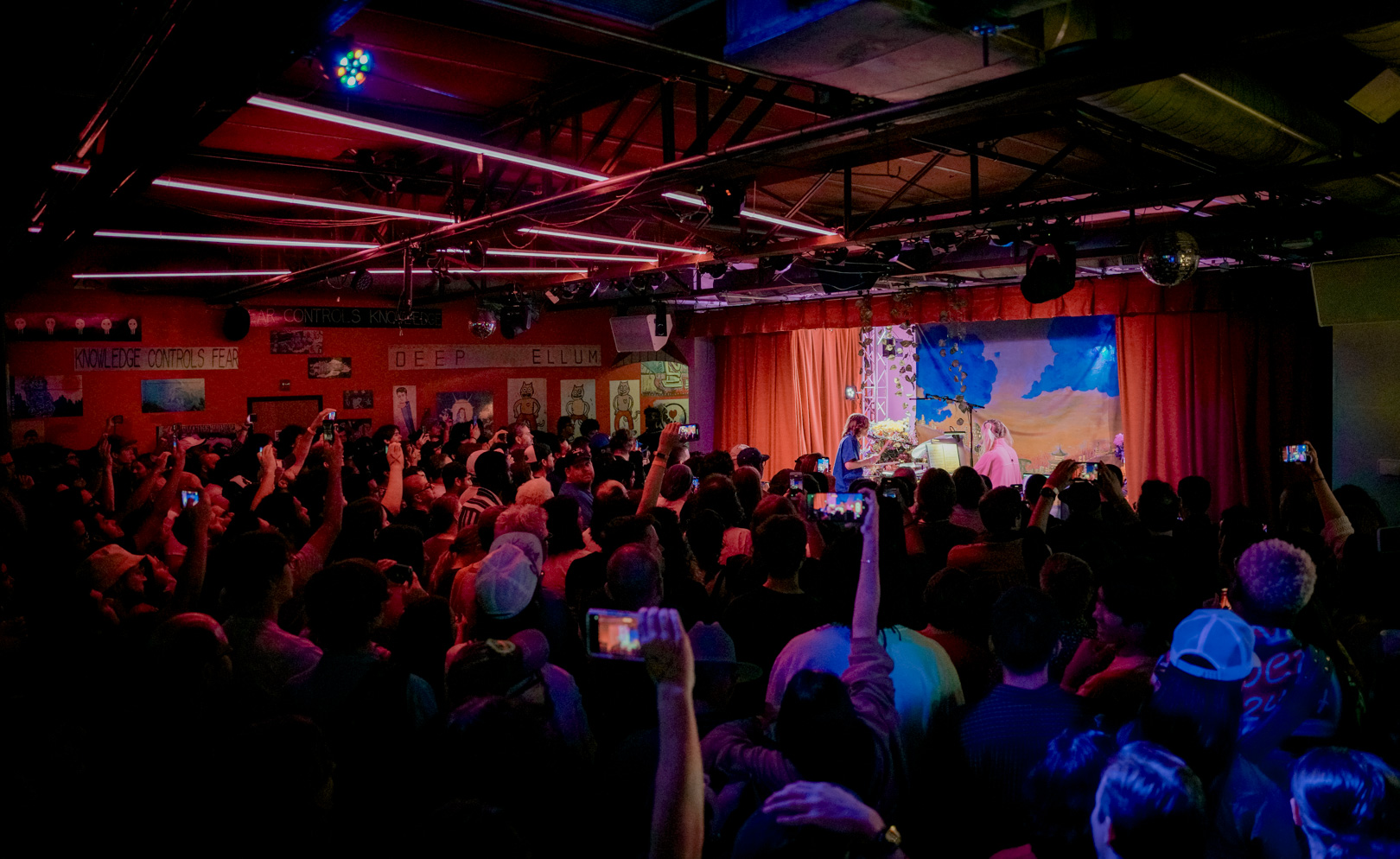 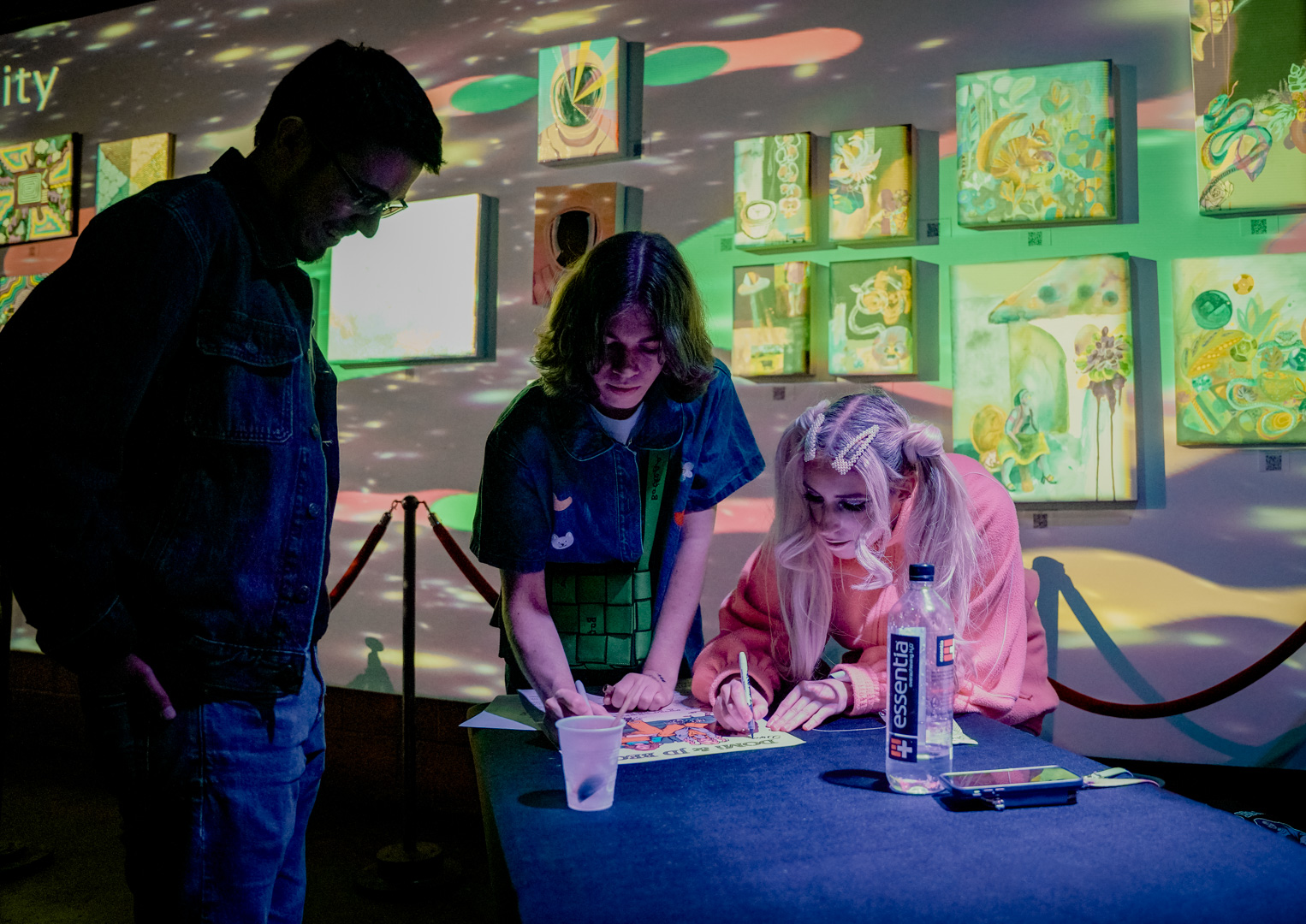 The duo had a meet-and-greet with fans. signing posters and merch at the end of the night. Photo: Jessica Waffles 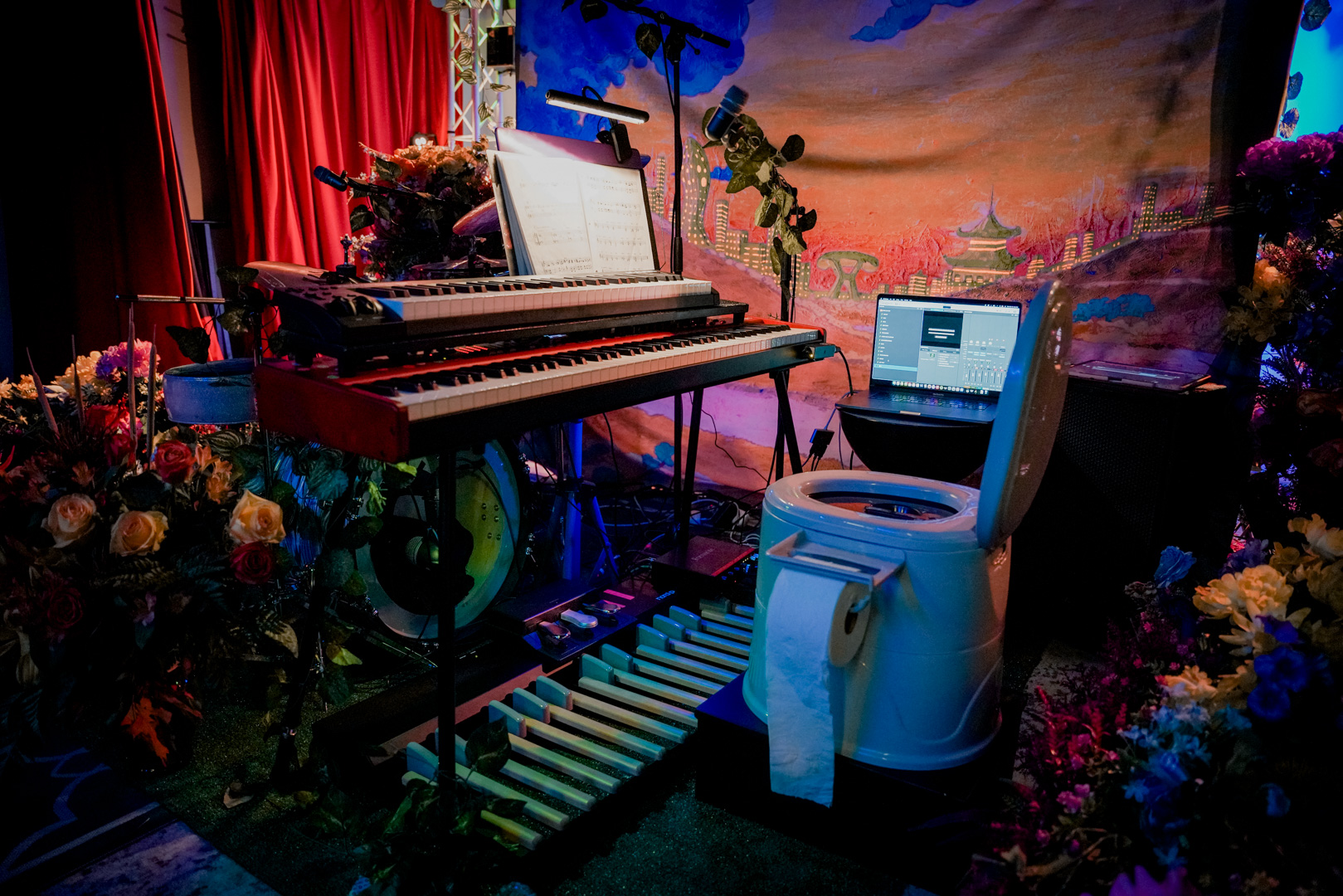 DOMi sat upon a toilet seat complete with a toilet paper roll on stage, in front of the stage backdrop that came from their NOT TiGHT album cover. Photo: Jessica Waffles