Last month marked the third installment of the return of Outward Bound Mixtape Sessions, which has found its new home at Rubber Gloves Rehearsal Studios in Denton, TX.

Total Sweetheart started the night. Their opening composition could be described (if it was possible to describe) as part rocket launch, part alien transmission, mixed with what might be the sounds of Velociraptors having a heated conversation.

Noise fans observed the duo, gathered around them in a semicircle and bobbing their heads to their own interpretation of a beat. 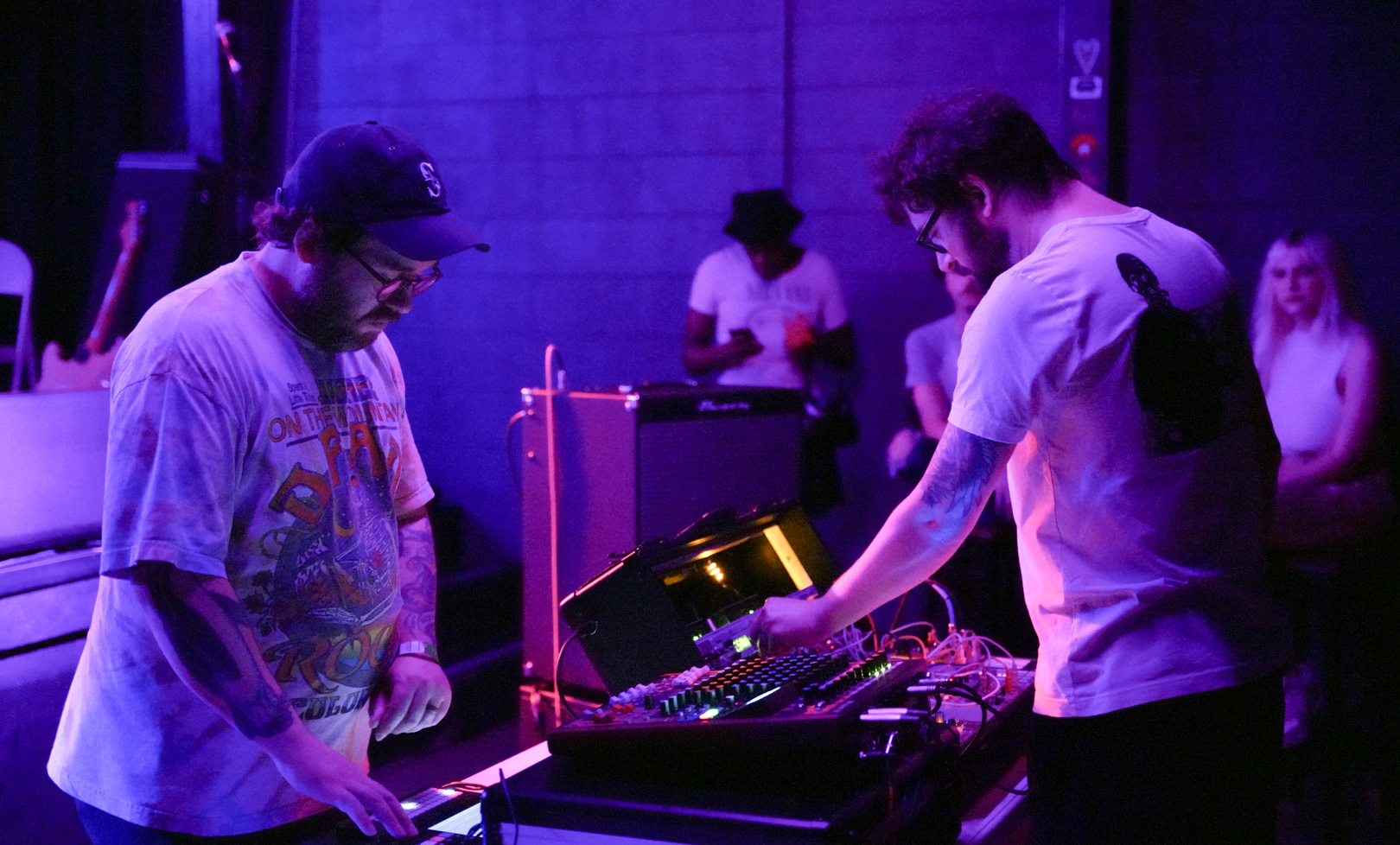 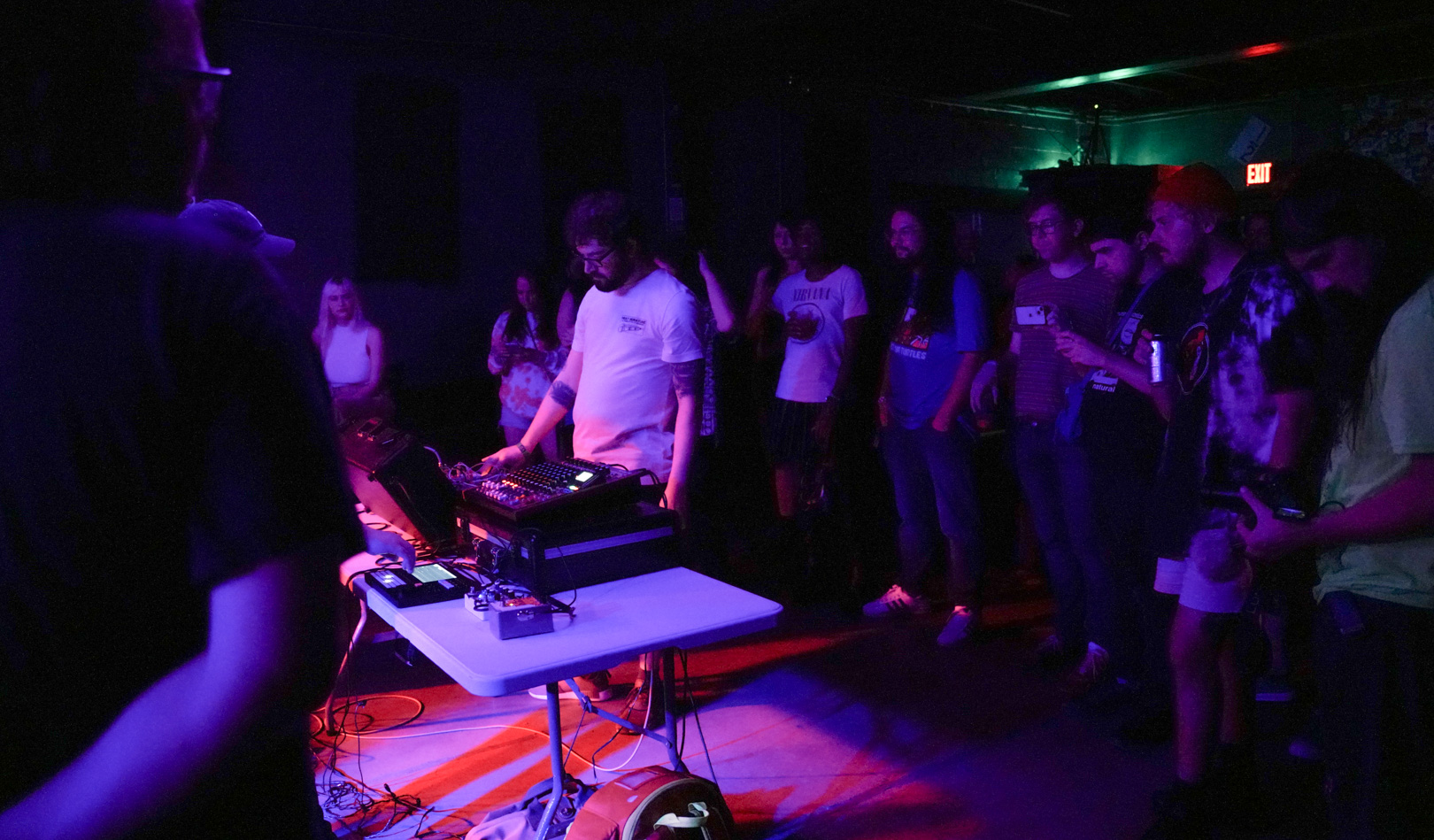 The crowd gathered around Total Sweetheart, who opted to play their set in front of the stage, creating a more intimate atmosphere. Photo: Jessica Waffles

OBMS has been a hub for experimental music since its conception around 2013. Its first home was the Crown & Harp (now closed) on Lower Greenville in Dallas. It moved to RBC in Deep Ellum around 2015, but shut down by necessity due to the global COVID-19 pandemic.

The series used to be a weekly Monday event, though in its transitionary phase has become a monthly event – hosted on the last Monday of the month at Rubber Gloves. It should be noted that October’s event will be second to last Monday, due to Halloween. There will be spooky vibes and a costume contest. 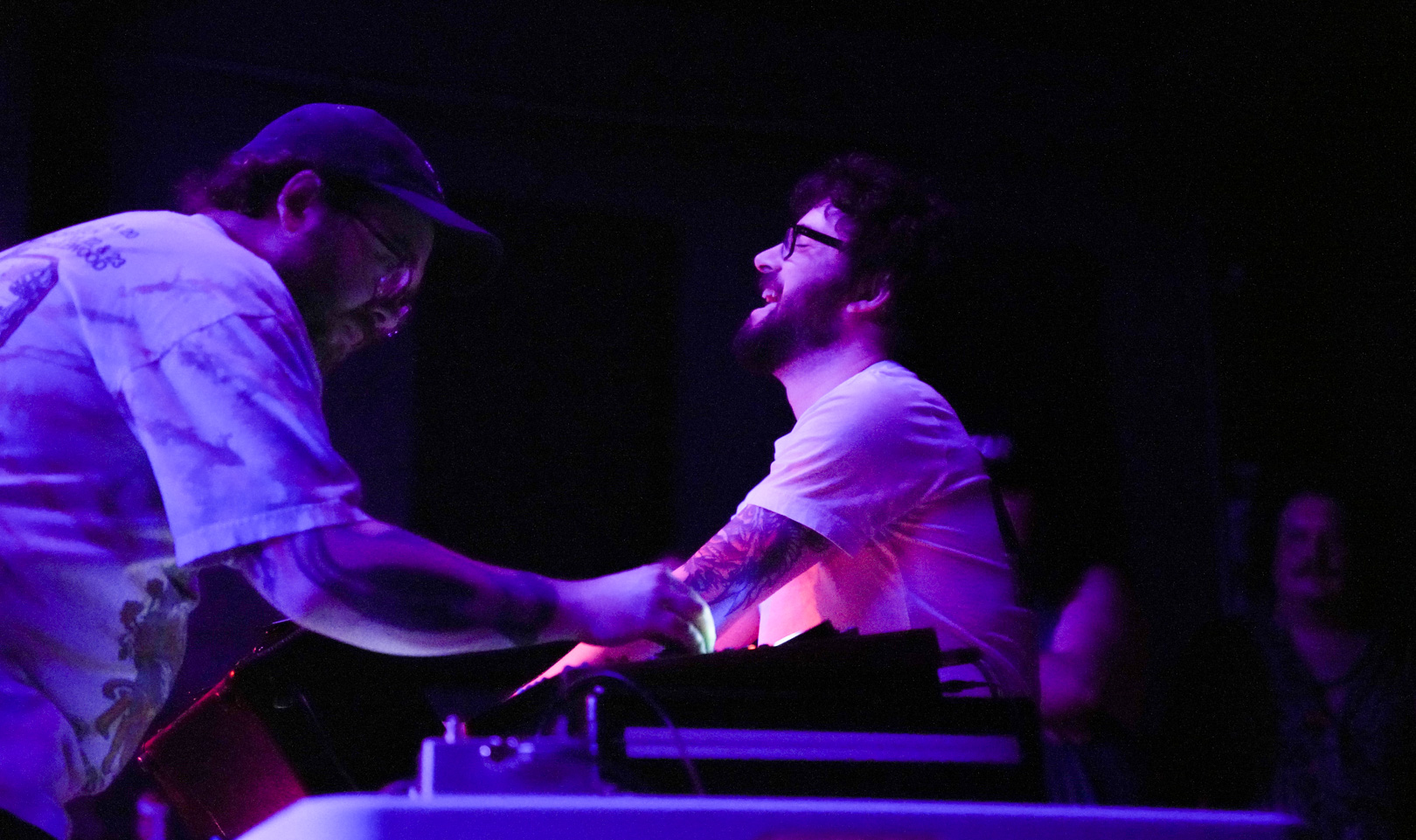 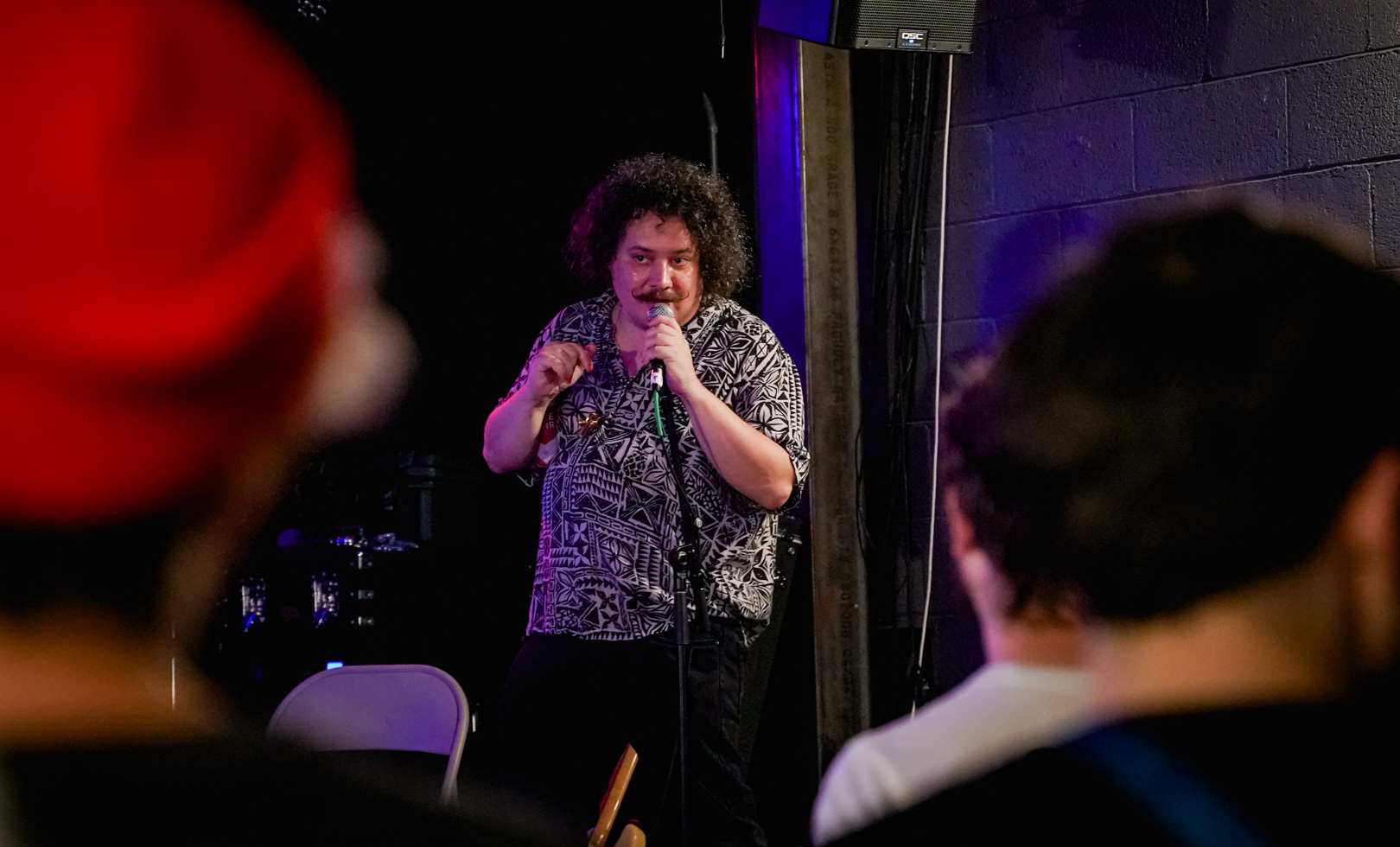 One of the Outward Bound Mixtape Sessions producers Aaron Gonzalez introduced the acts for the night. Photo: Jessica Waffles

Brothers Stefan and Aaron Gonzalez work together to curate the series. Now that it’s a monthly instead of a weekly, it gives the pair opportunity for more detailed planning.

“It gives us more time to be discerning and deliberate,”Aaron begins.

“Though also not always,” Stefan says. “Sometimes it can be very arbitrary, in a good way. How we’re feeling, what suits the mood -”

“- and who by chance we got to agree to play,” Stefan laughs. 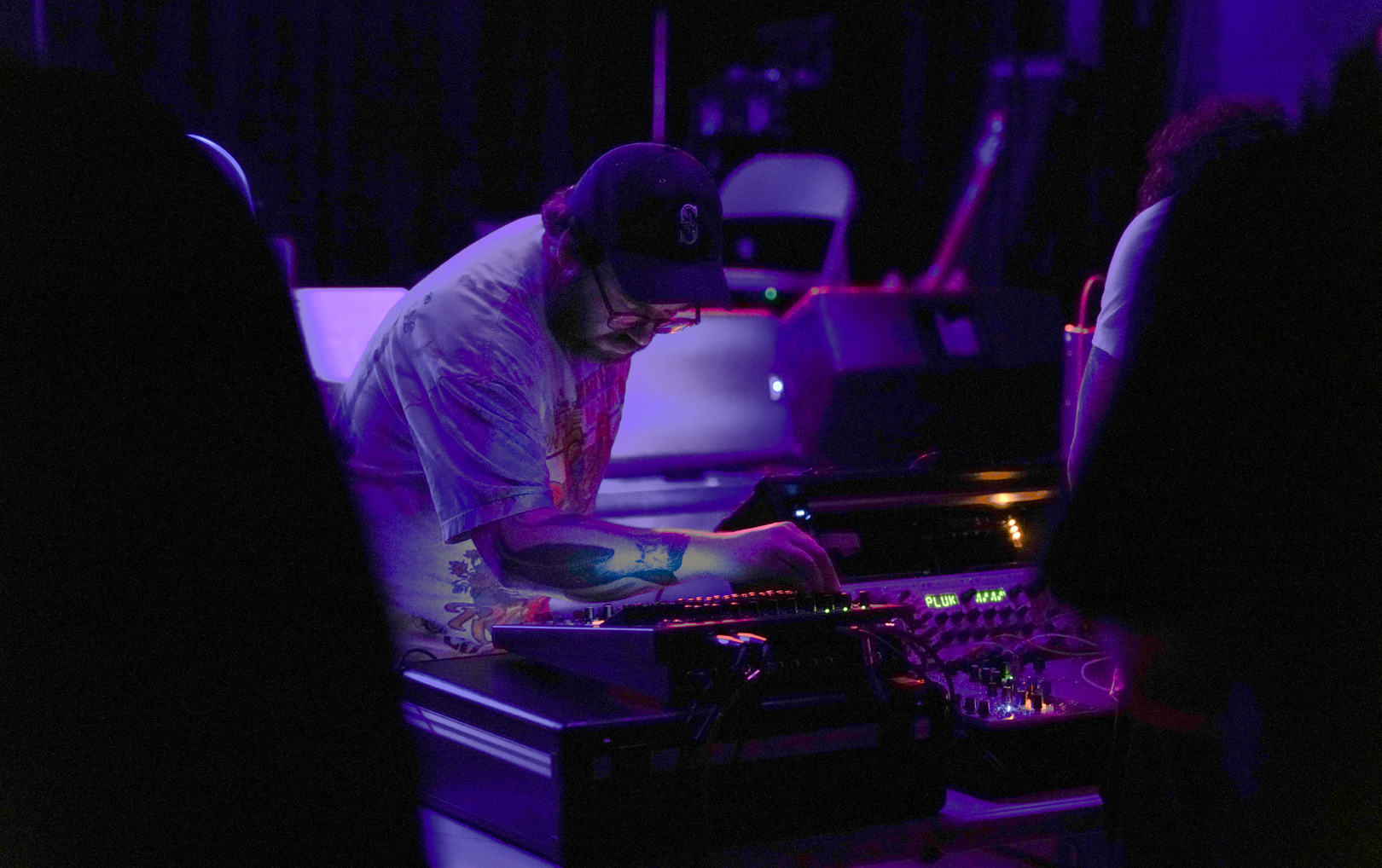 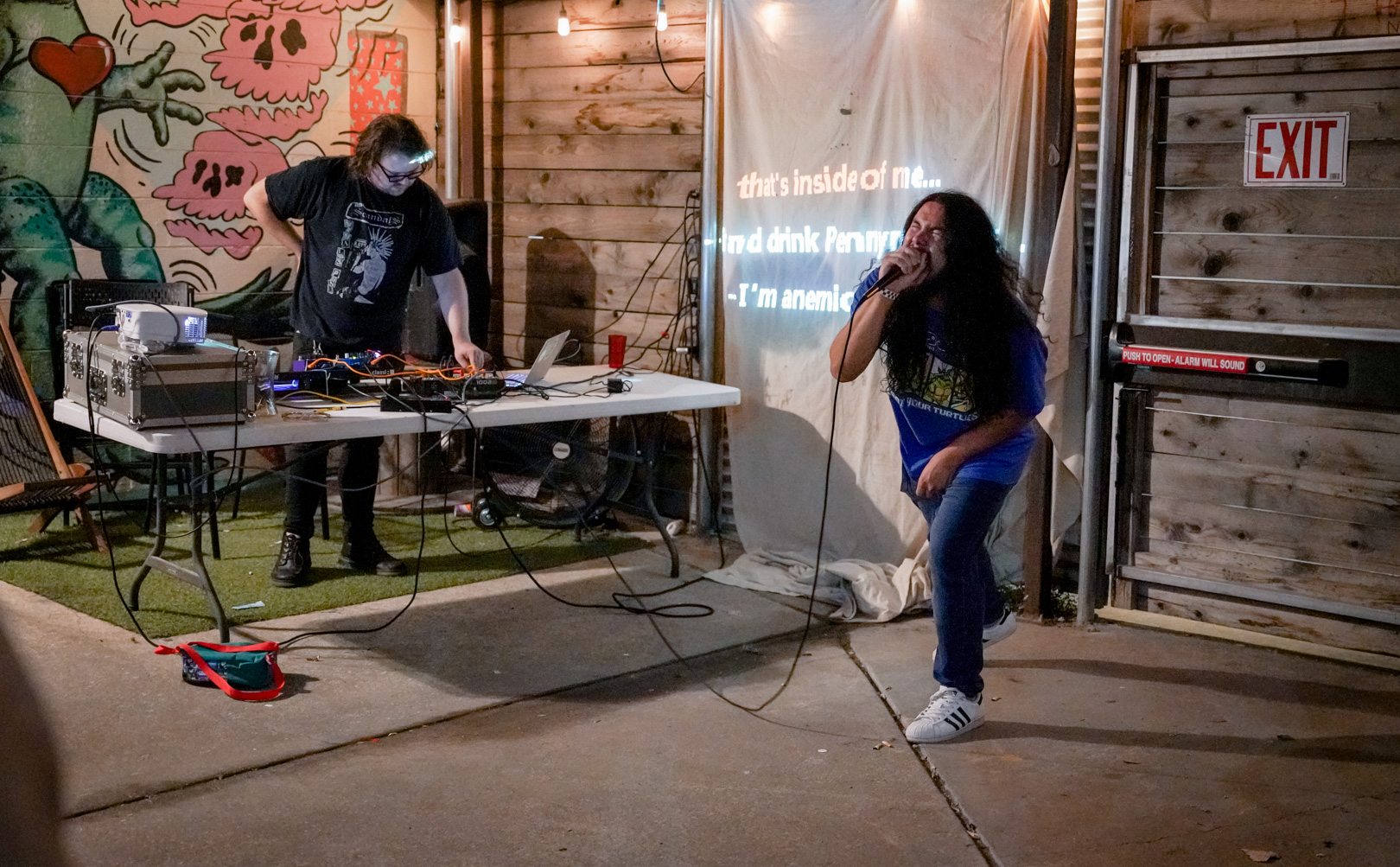 Between sets, patrons were invited to participate in “noise karaoke” administered by Rick Eye, where songs and vocals were manipulated and distorted through the speakers. This created a barely recognizable sound that was as entertaining as it was noisy.

Many singers opted to do their best screamo-style vocals on such songs as “Pennyroyal Tea” by Nirvana and “Will You Still Love Me Tomorrow?” by Amy Winehouse.

“We want to make this a place that is both avant-garde and accessible,” Aaron emphasized. “bringing bands nobody else will bring, and being as experimental and unrelenting as they go. Noise karaoke kind of compiles that aspect and bridges the gap.” 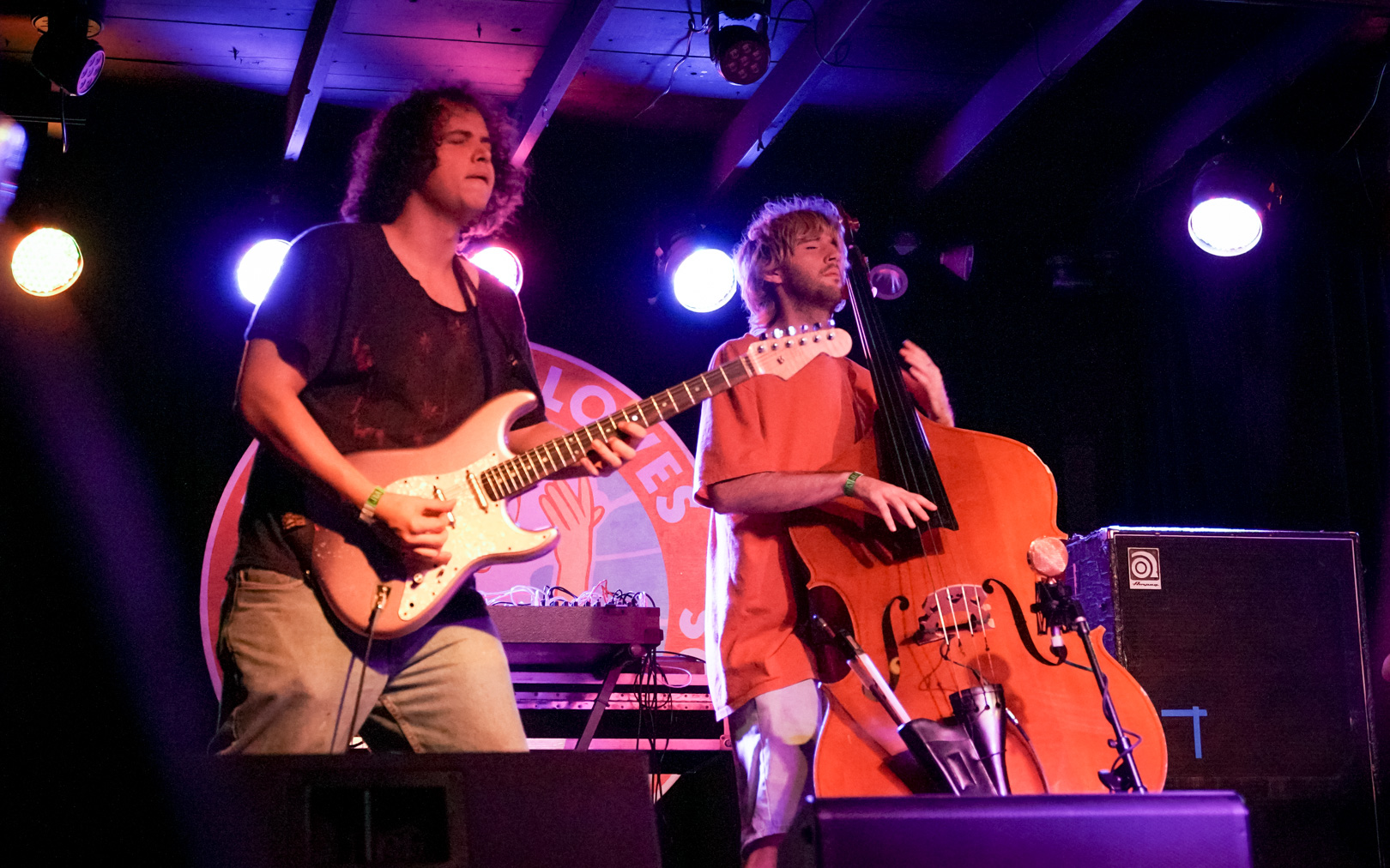 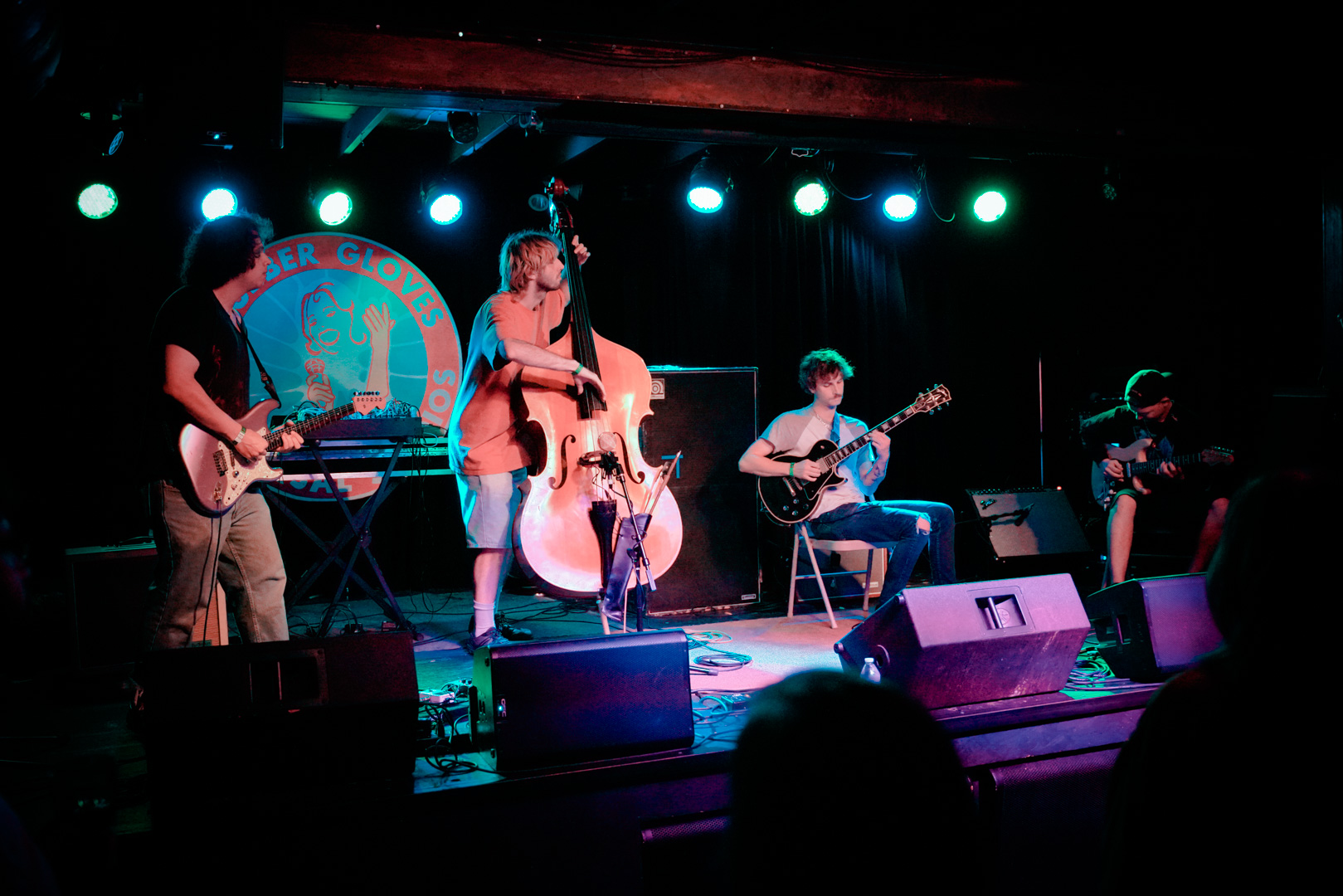 “Our vision is multi-faceted,” Stefan said. “Everyone can be who they are here. We are kind of the ‘token avant-garde series’ in Dallas, but Denton is really healthy with experimental music. This has been great here so far.”

The musicians meandered through a river of cacophone, harmony, noise, reaction, and haunting moments of complexity among the 22 strings on stage. They played four pieces, each one as dynamic as the last, captivating the crowd to listen closely to their sounds.

“There’s no particular parameter of music we require,” Aaron said. “It’s about being accessible, but uncompromising. We want to show that anybody can get into the wide array of music we present.” 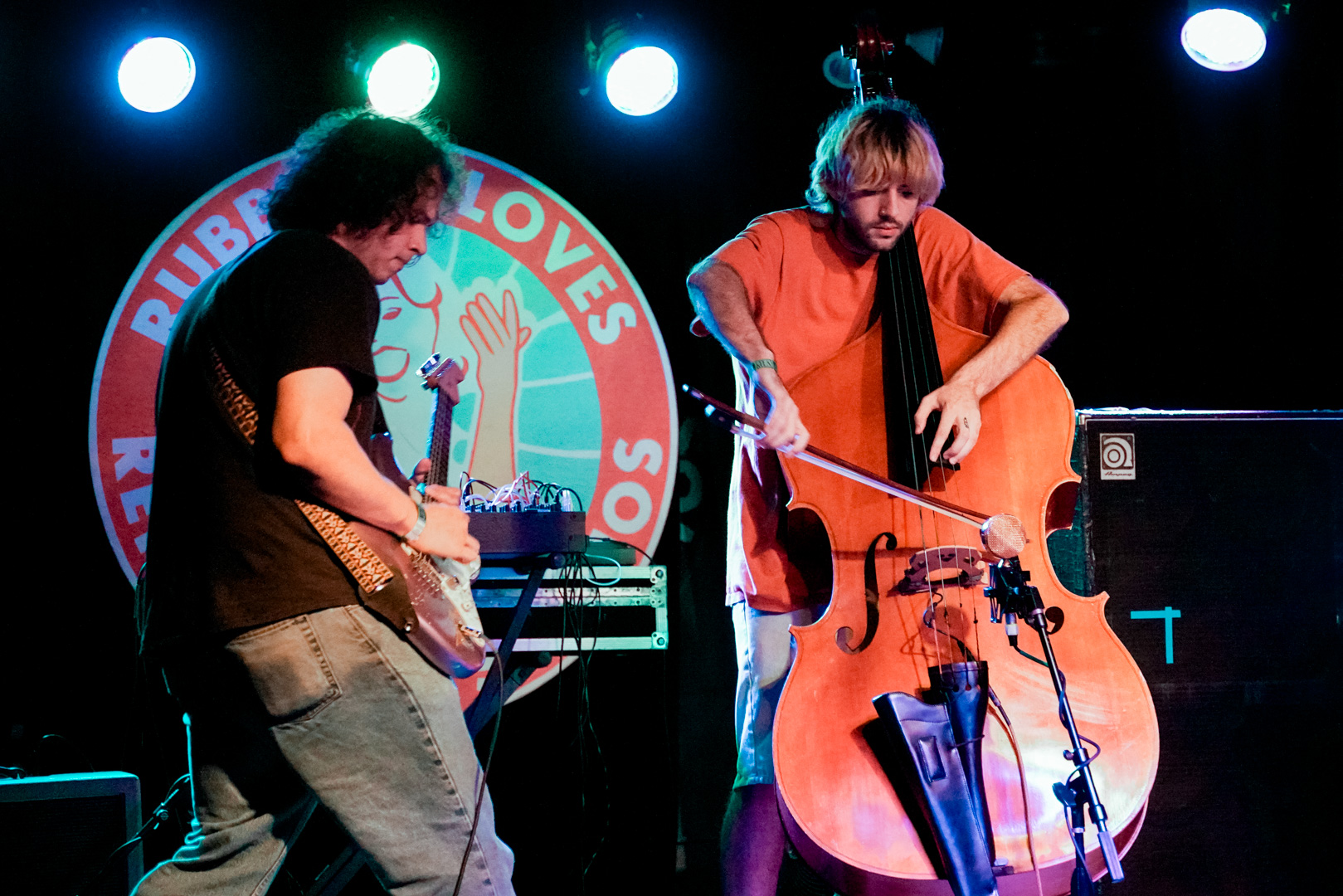 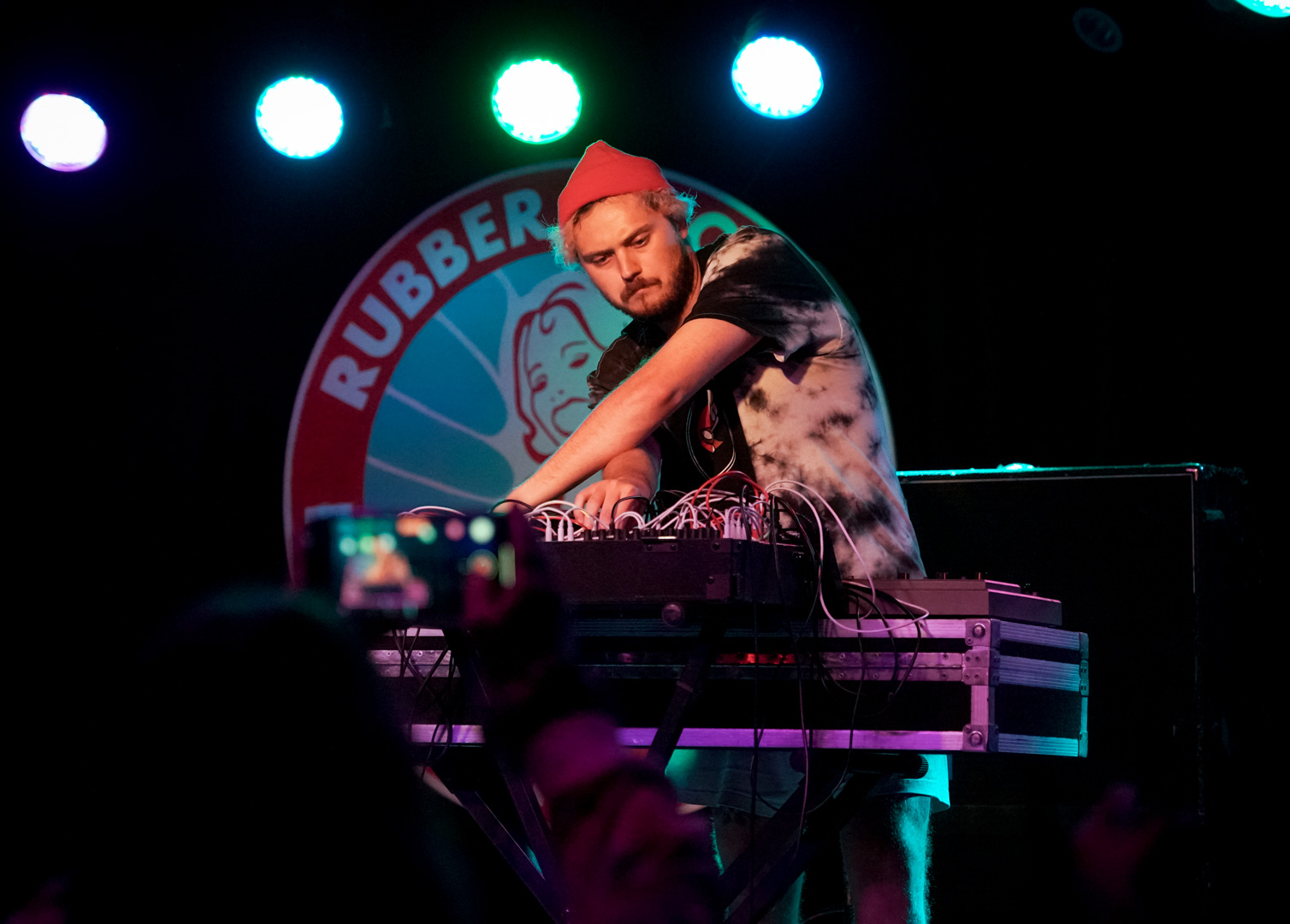 Los Angeles- based AURAGRAPH closed out the night at OBMS. the set was like an industrial synthwave fever dream, which engulfed the room in sounds that be a tad familiar to you. AURAGRAPH is a score mix engineer on the critically-acclaimed tv show Stranger Things, and there’s no wonder why his music stands out. AURAGRAPH delivers a blend of minimalism, ambient and lo-fi synthesis with upbeat analog drum patterns recalling the framework for genres like house and early techno.

It was definitely the most dance-able set of the night, melodically encouraging the come-early, stay-late Denton crowd to keep up the energy past midnight.

The upcoming September edition on 9/26 will include Wyatt Rosser’s project Plomo, which locals may know from their other project Asukubus. Gonzalez-Freck-Miller Trio will be performing, witch Stefan Gonzalez (drums, vibrophone), Matthew Freck (standup bass) and Joshua Miller (sax, drums). 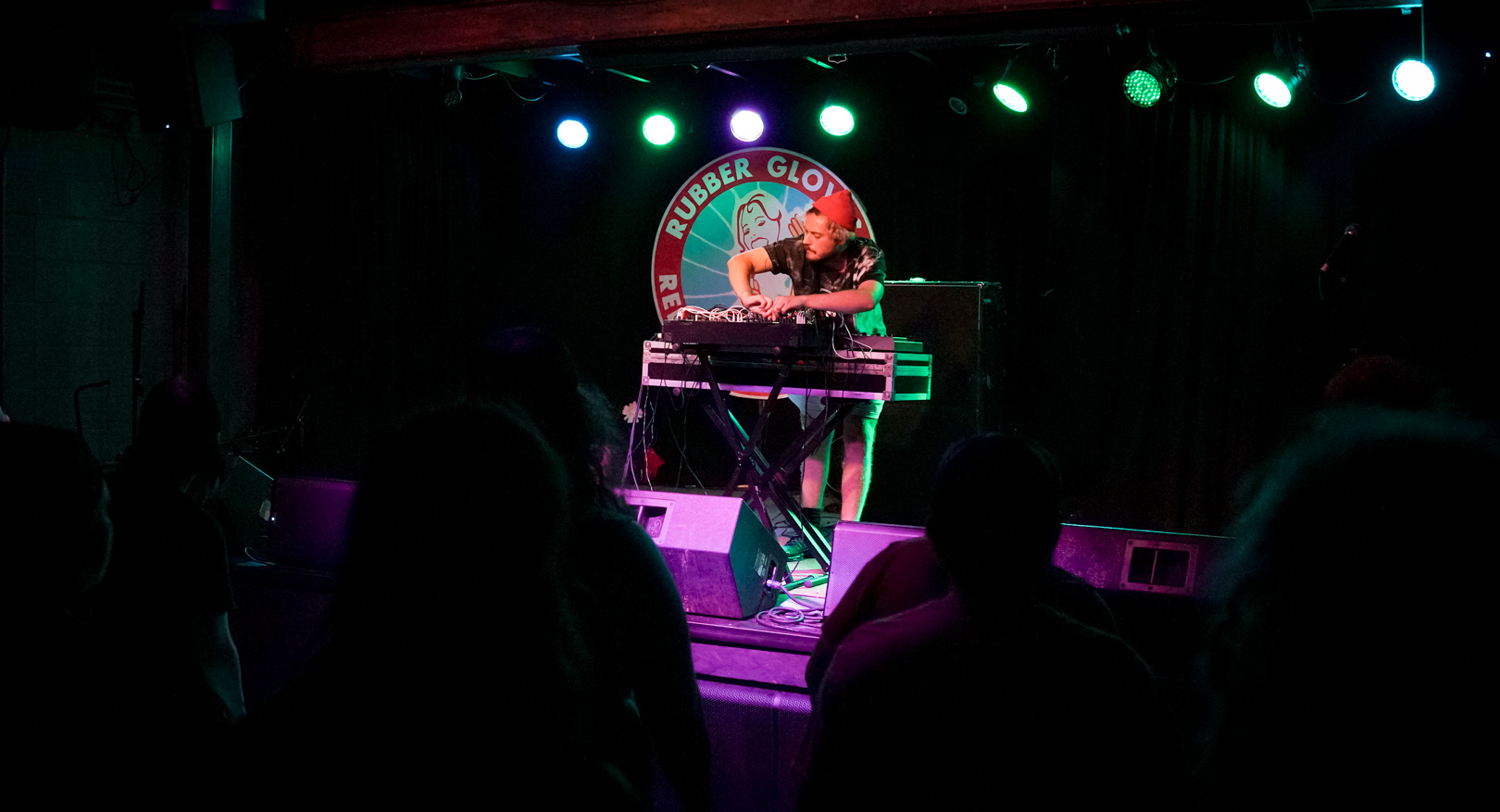 You may recognize work by AURAGRAPH through their position as Score Mix Engineer on the Stranger Things soundtrack.Photo: Jessica Waffles