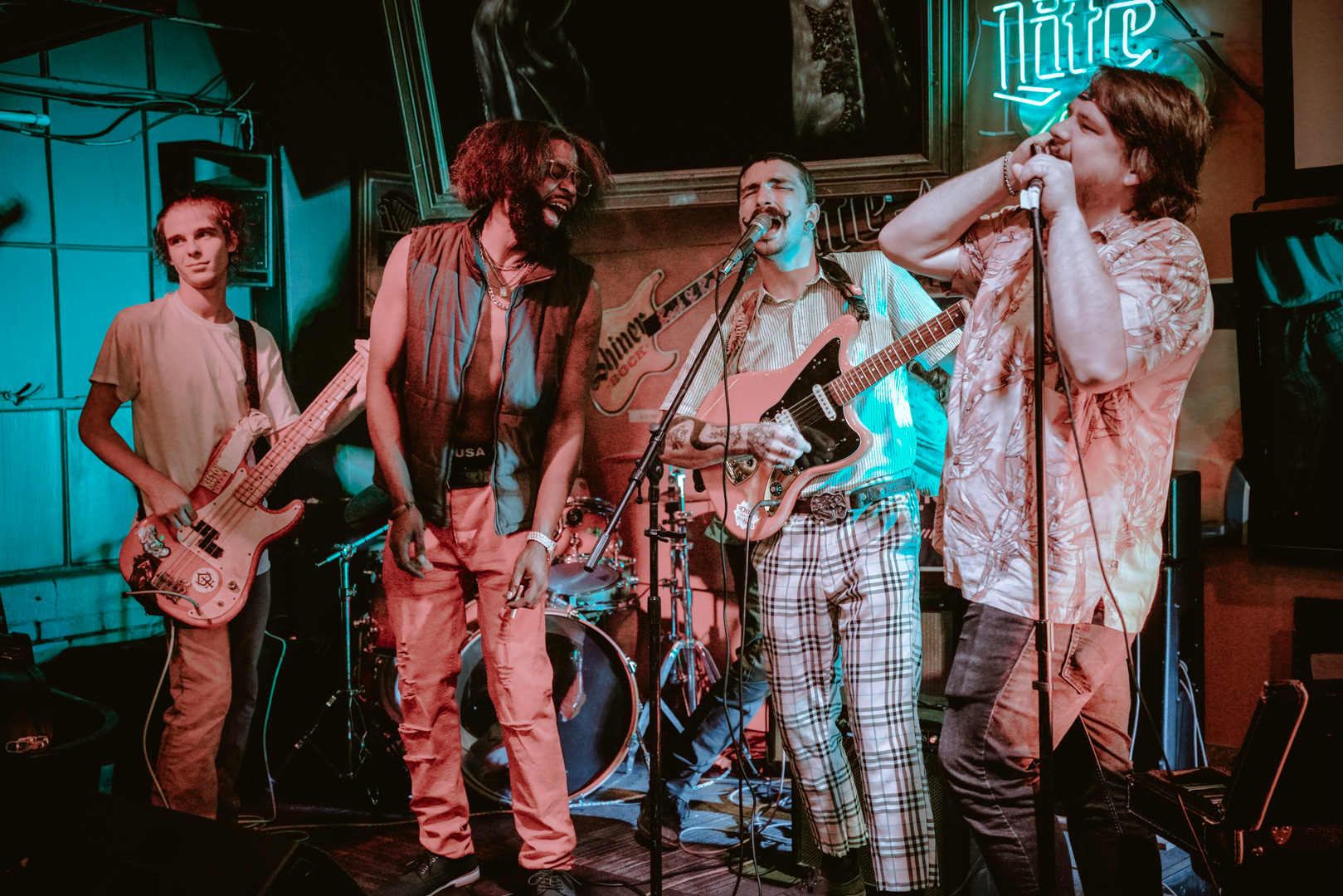 Work In Progress Productions started in the mind of Hayden Redmon, a young artist and entrepreneur that has been referring to his creative endeavors as WIP for the past eight years. The group is an independent production company aiming to do good in the community through organizing charitable fundraising concerts, hosting open mics, producing music videos for artists and working to support artists with creative resources.

Since 2021, WIP has organized over 50 events, collaborated with 300+ artists and has donated over $11,000 charities focused on food bands, cancer research, education, mental health and homelessness.

The organization hopes to reach their charitable fundraising goal of $20,000 by the end of the year, continuing their focus on food insecurity and homelessness in North Texas.

Their next scheduled event is October 7 at Stan’s Blue Note featuring The Hangovers from Milwaukee, VuDu Childe, Giffin Holtby and William Dunnil.

The organization’s roots stretch back to Redmon’s time in college at OU in Norman, Oklahoma. Redmon took art entrepreneurship classes that led to throwing his first events senior year in 2018. After college, he ended up at a data analyst job that worked him 60 to 70 hours a week crunching numbers.

“It was disheartening,” Redmon said. “I thought to myself, ‘This is not what I was put on this earth to do.'”

Months before, he was living his dream throwing shows. He wanted to get back to that, so he decided to build out the business plan that he and his friends had put together for those first few events. 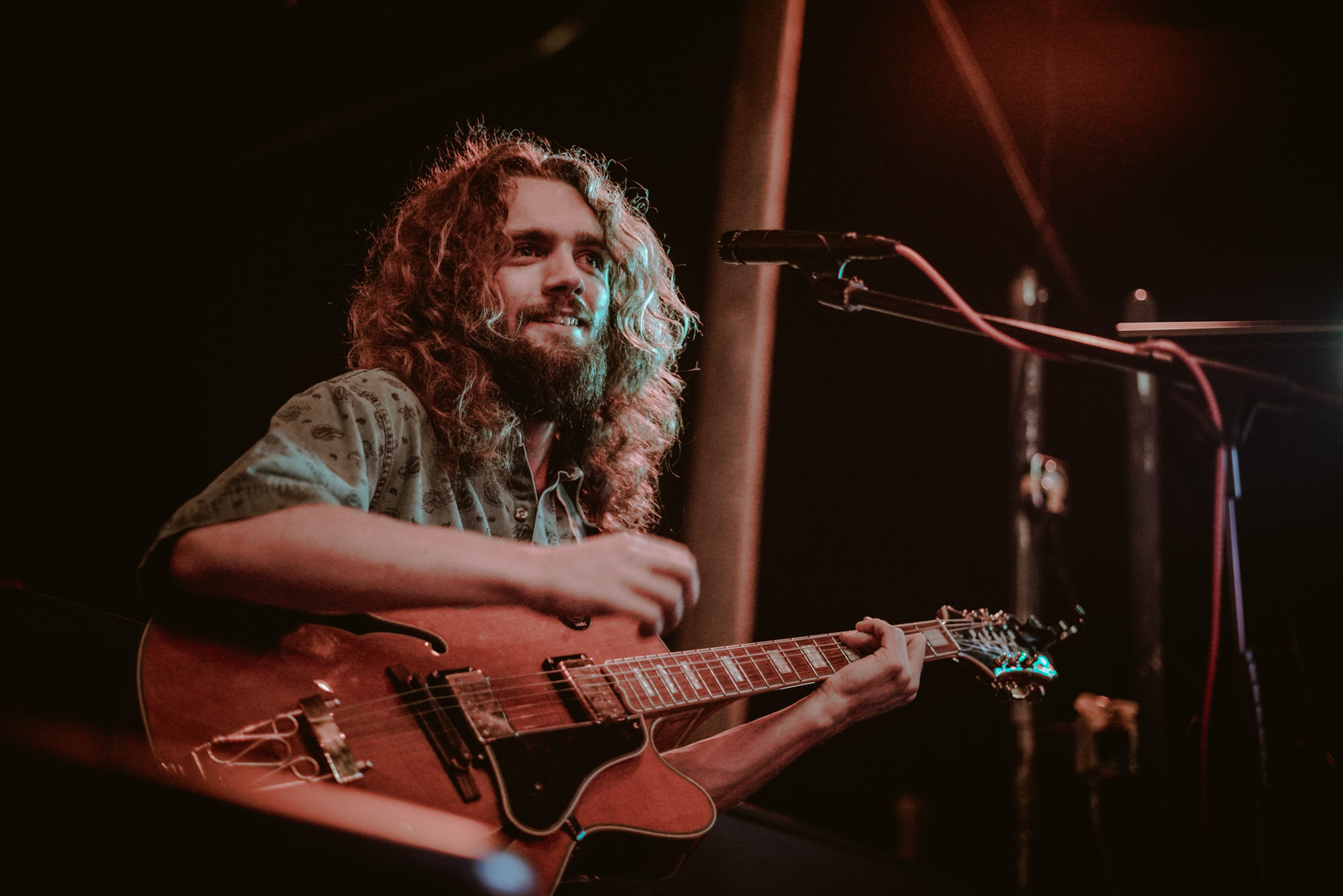 “Just when I felt like it was time to start embarking on projects, the world shut down,” Redmon continued. “In hindsight, it was reset button for everyone. For me, it allowed me to dive into this Work In Progress idea mentality, but also the business side.”

The movement began to come together in February 2020 when Redmon reached out to his Houston-based best friend John Wright. “I said, ‘John, if I don’t do this, I’ll never be happy. I’ve gotta at least try. I can’t do it by myself. Do you want to go in on this business with me?”

The two decided that as soon as they could “see a light at the end of the tunnel” from the COVID pandemic, they would throw a gig. At the beginning of 2021, the timing seemed to be right. 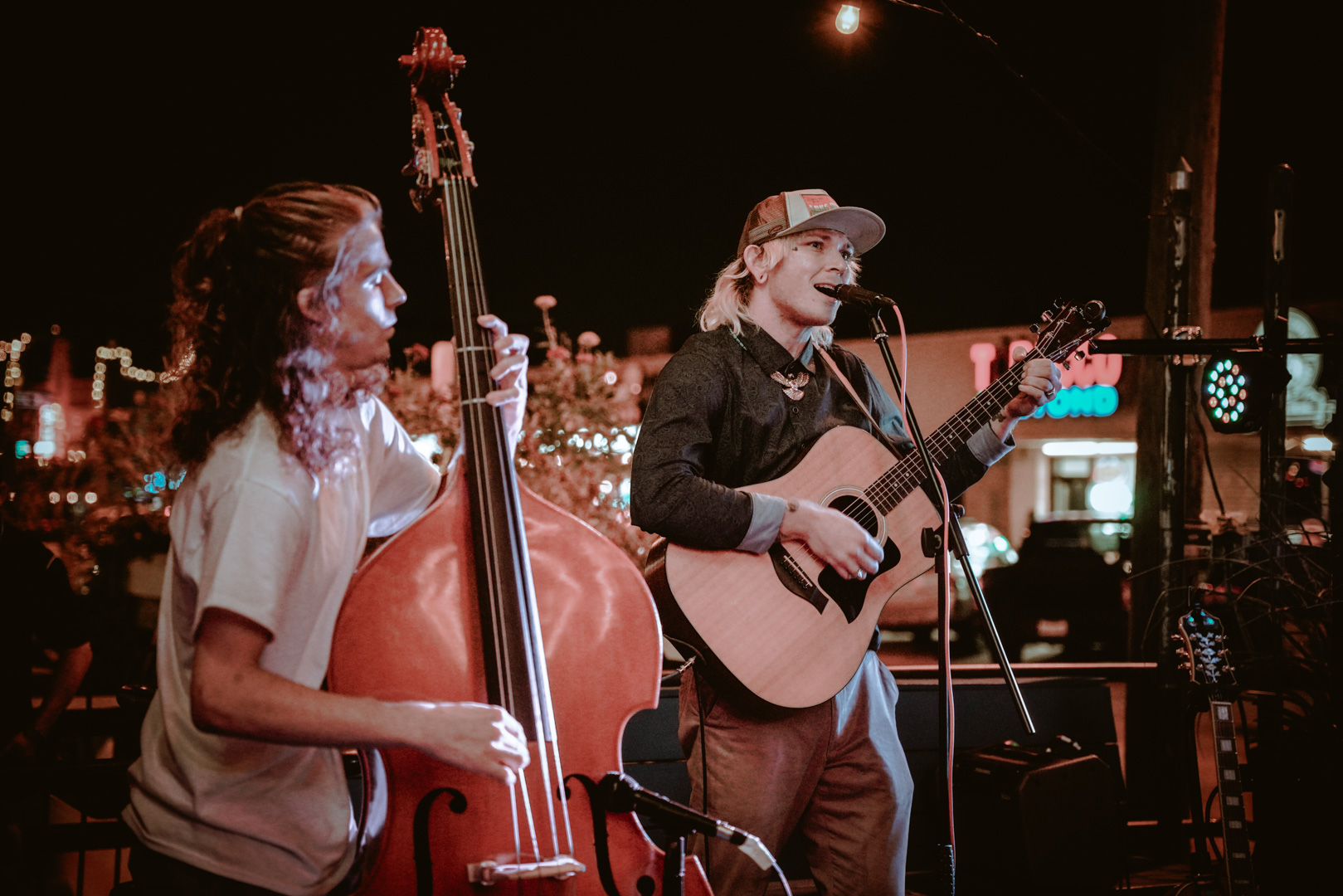 “The winter storm had just rolled through Texas, everyone’s power was out, it was 35 degrees in my bedroom,” Redmon said. “It was time for us to put our words into action and throw a gig for the great good. We felt it was a good idea to raise money for the North Texas Food Bank. Food scarcity is a big deal and we wanted to help.”

The first official WIP event was at the Texas Ale Project in Dallas’ Design District. The featured music was Group Nameless and Redmon & Wright’s band Del Marera. It brought in nearly 200 attendees and $2,000 for the North Texas Food Bank.

The next event three months later at West Alabama Ice House in Houston raised another $1,250 for the Houston Food Bank. Then just six days later WIP did another show at Texas Ale Project to raise another $2,000 for the North Texas Food Bank. 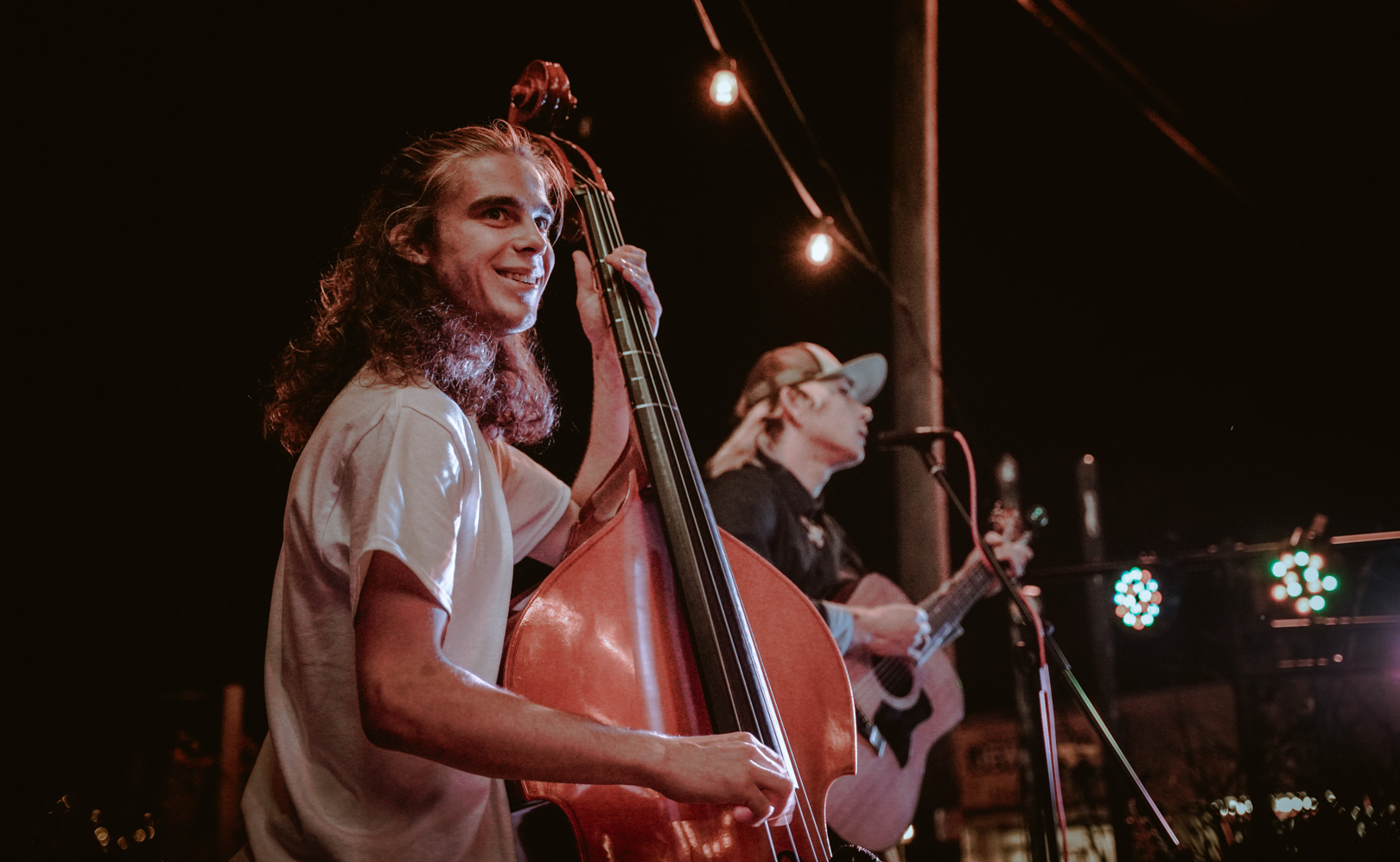 “At this point, we were riding high,” Redmon said. “We’re grassroots, edgy, gritty. And we’re not stuffing our own pockets. We started diving into education and cancer research organizations. Bythe time June rolled around, we did more shows in Houston, Dallas and then one in Brooklyn at the Williamsburg Music Center where we raised money for St. Baldrick’s Foundation [a childhood cancer research charity]. We raised $2,200 between Brooklyn and Dallas.”

The Brooklyn connection came through Serena Brown, a new team member at his day job who became interested in WIP’s mission and helped book the venue. Soon, the movement spread to Austin through more people wanting to support the cause.

“The amount of people who have had their fingerprints on this project and amount of overwhelming support I’ve felt on this has been great,” Redmon said. 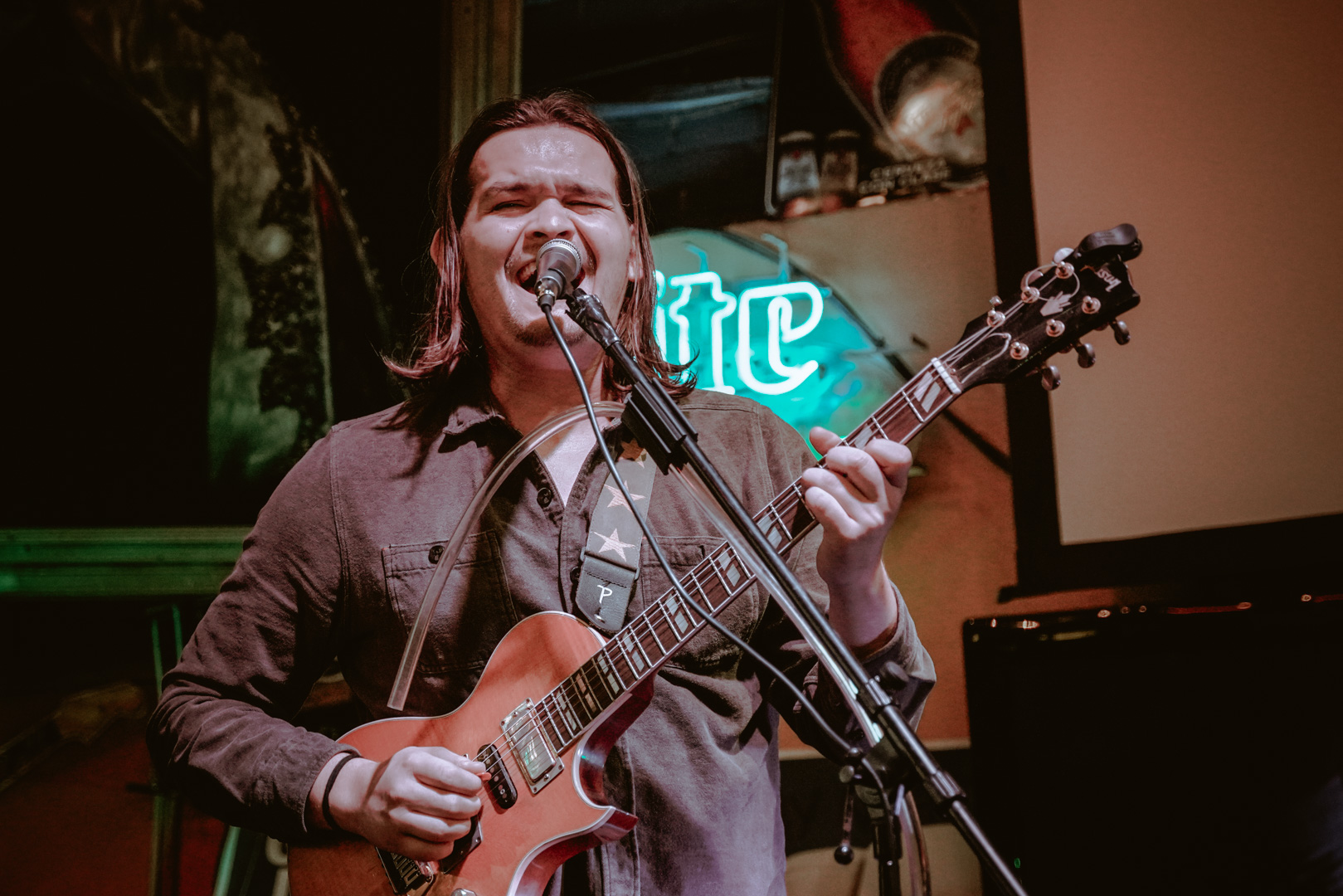 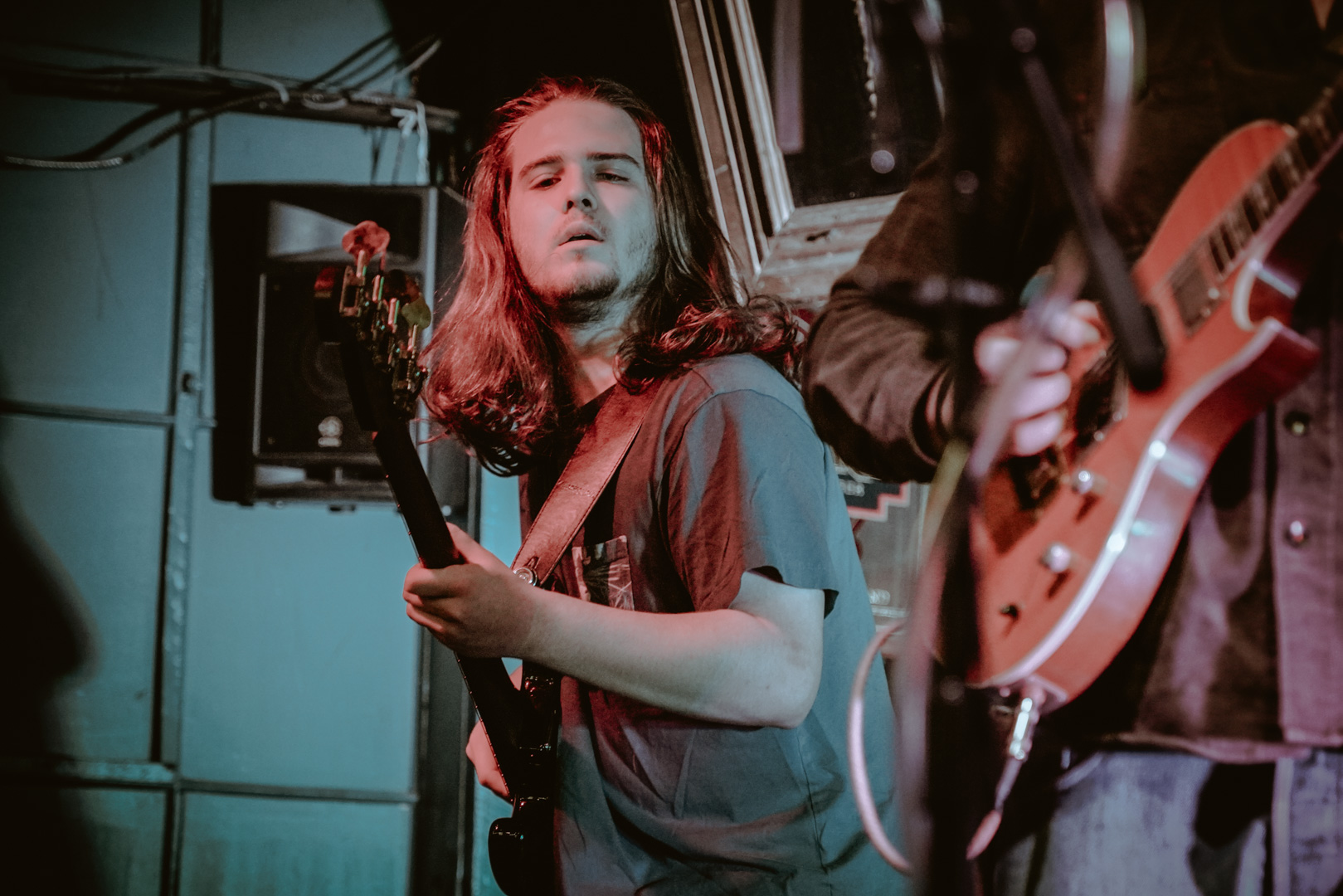 “What I’ve noticed is to answer the question, ‘What is the goal?'” Redmon says. “I’ve found that there’s so many artists that have never had the support they need or the support they deserve. That’s why the charity aspect is so important. We’re all just trying to do the same thing. It’s like my favorite thing on earth. If you know the money is going to a food bank or cancer research, it sets the tone. You can kick back and unwind while having civic pride.”

Being able to put artists on stage who are in the local realm and curate the lineup has been a special element to Redmon’s vision.

“Curating this artist vibe, coupling it with the motive to do something in this city, it’s important,” Redmon said. “Especially when people aren’t feeling like they aren’t getting what they need from the government.” 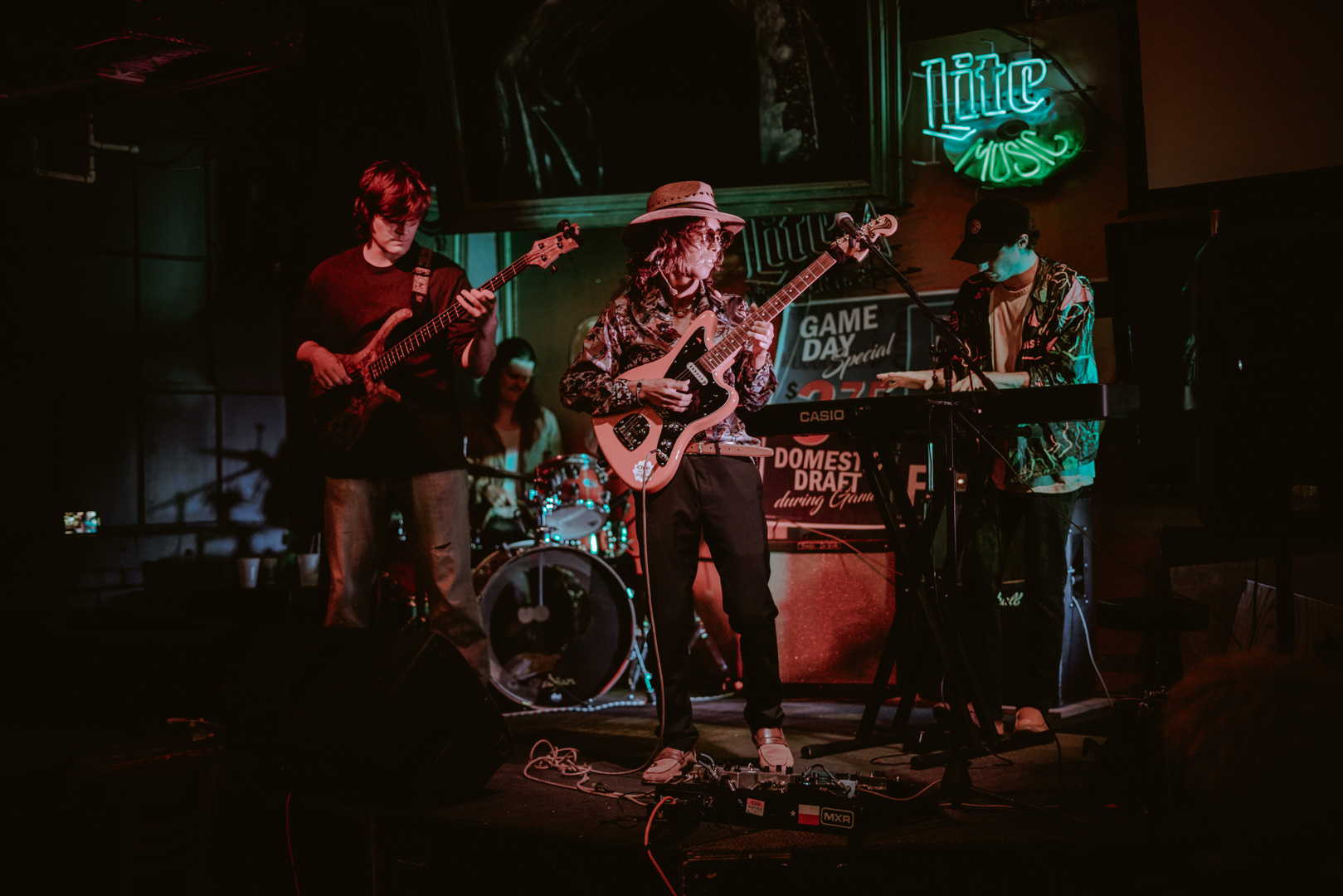 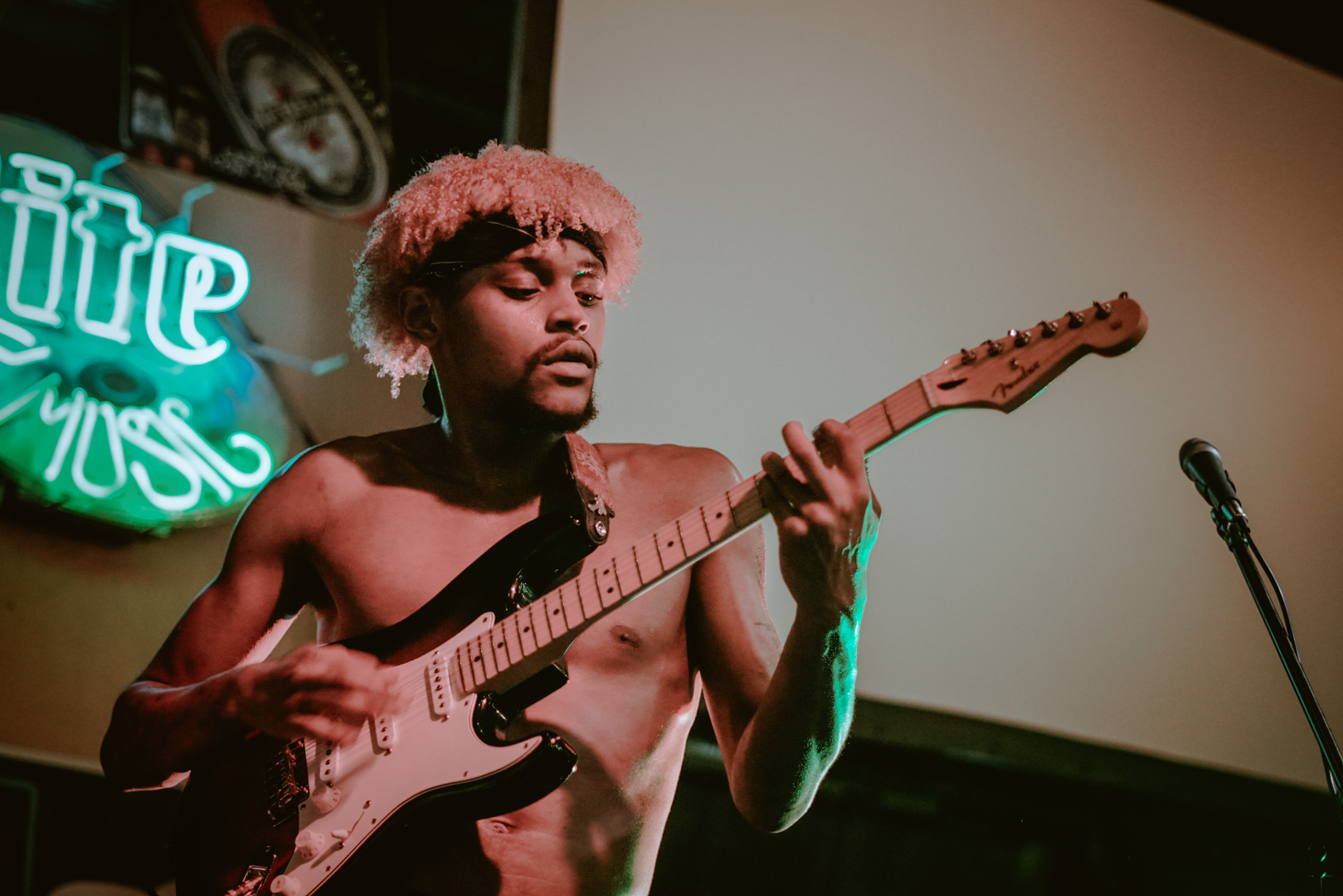 “I’ve heard from a number of the artists we work with that they’re not used to the level of respect and professionalism that we come to them with,” Redmon says of the music industry. “We can guarantee funding and provide infrastructure for artists. I’m not a rocket scientist, but what I am is driven. When people see that, it’s like ‘Wait, I can do this too.'”

Redmon cites Arlington-based SYLA Media (Support Your Local Artist) run by Ladi the Musician as a heavy influence in the way WIP supports artists. SYLA is a business that works as “a figurative umbrella gathering artists to showcase their body of work,” using it as a driving force to push other artists – as reported by Forrest Cook in the En La Calle On The Street online edition in 2021. 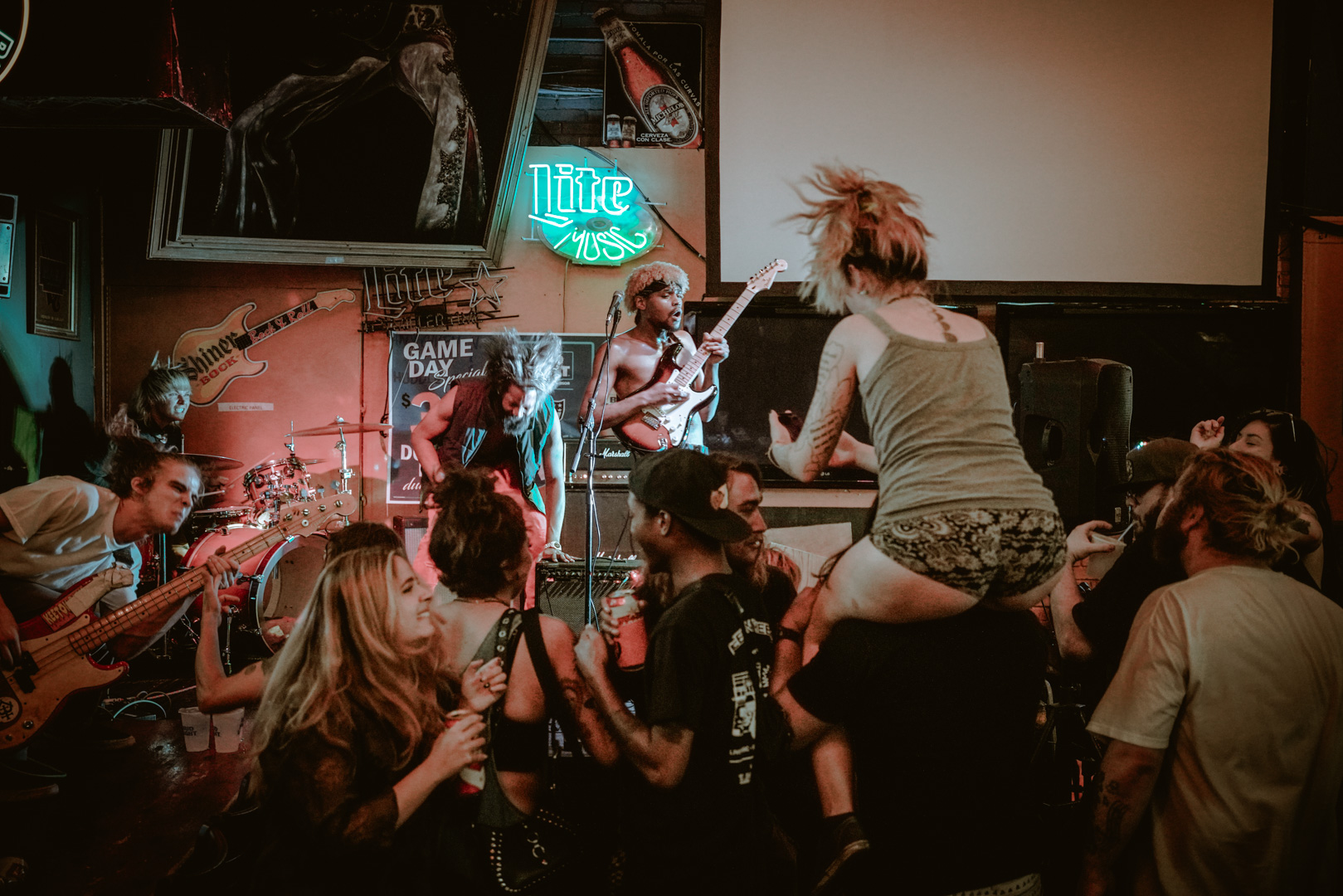 The headlining Late Night Call set was rowdy, as attendees got on shoulders and danced on tables at Stan’s Blue Note. Photo: Jessica Waffles

The WIP mentality continued in April of 2022 at Stan’s Blue Note with more consistent gigs featuring bands like Artemis Funk and Igimeji. It soon turned into a Summer series called the “Can Jam” through June and July, with featured artists Averi Burk, Ryan Berg, Griffin Holtby, Wayside Motel and more – collecting canned food donations and raising money for the North Texas Food Bank.

“The Can Jam was something that was easy and tangible for people to wrap their heads around,” Redmon said. “We got to start dipping our toes into a new caliber of artists while giving artists hustling in Dallas without a home a place to jam on Wednesdays.” 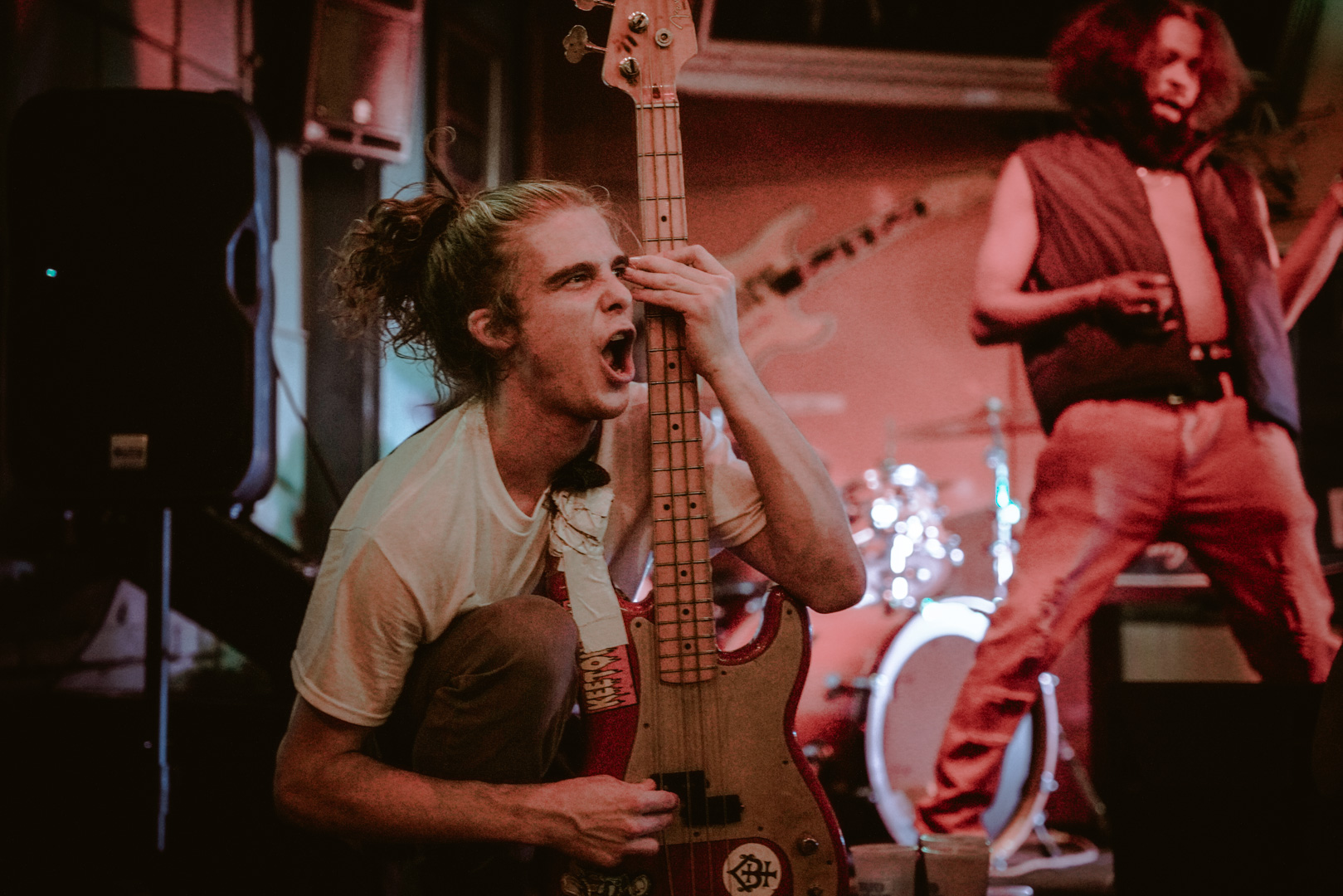 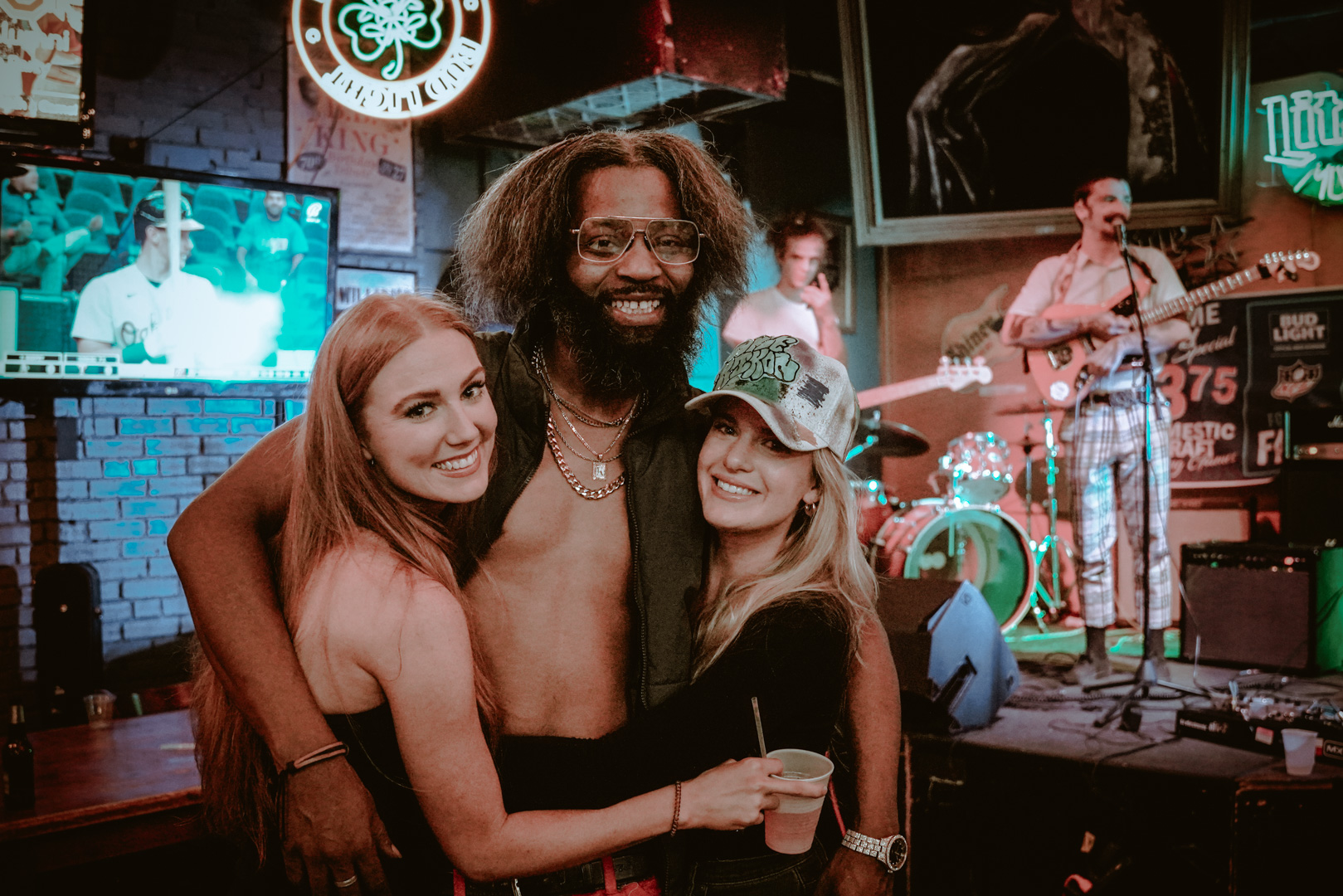 Where to catch Work in Progress: 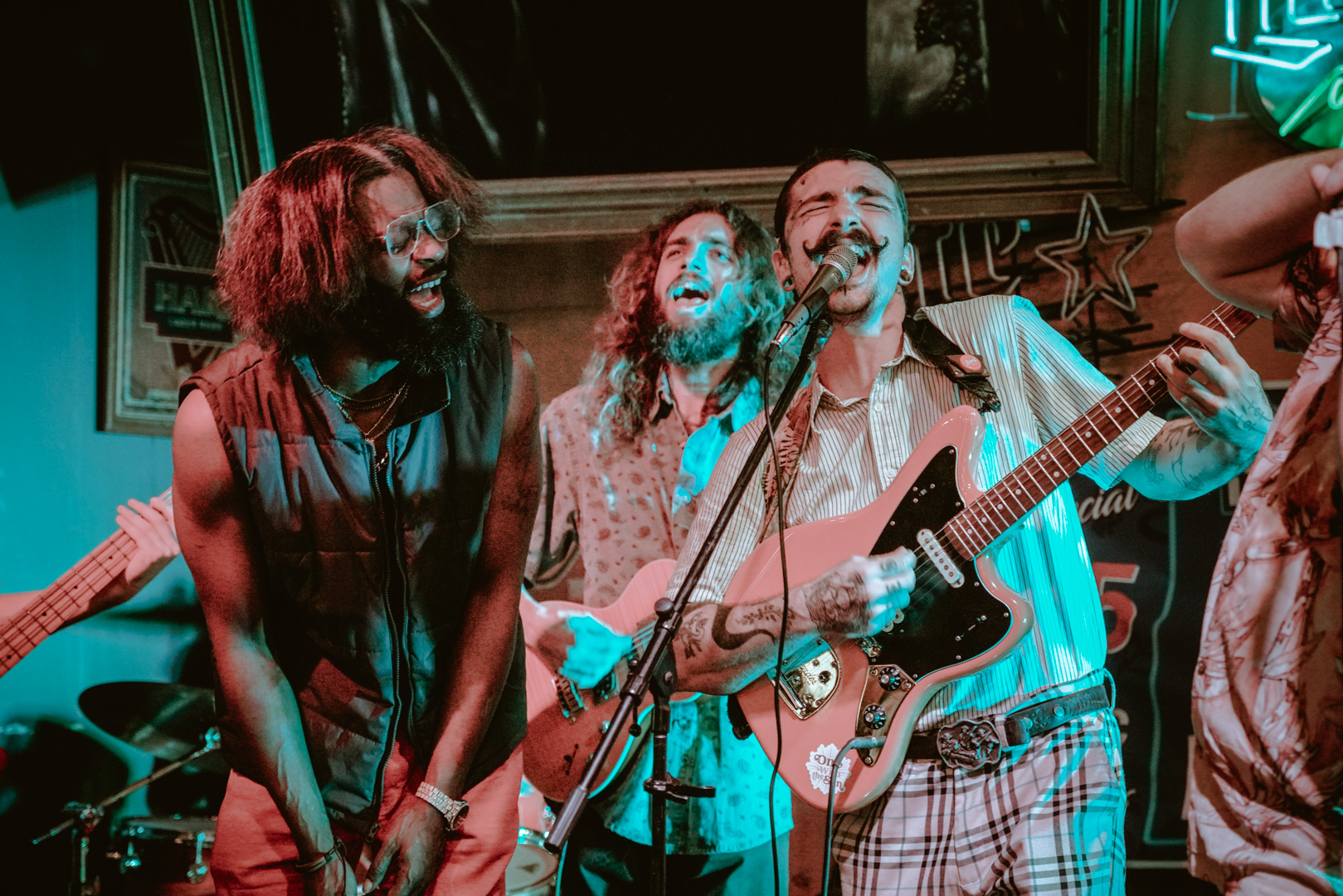 Wayside Motel closed the night with their two new songs “Finally Sober” and “Leech.” The former was a song the birthday boy loves from the band, joining them to sing it on stage. Photo: Jessica Waffles