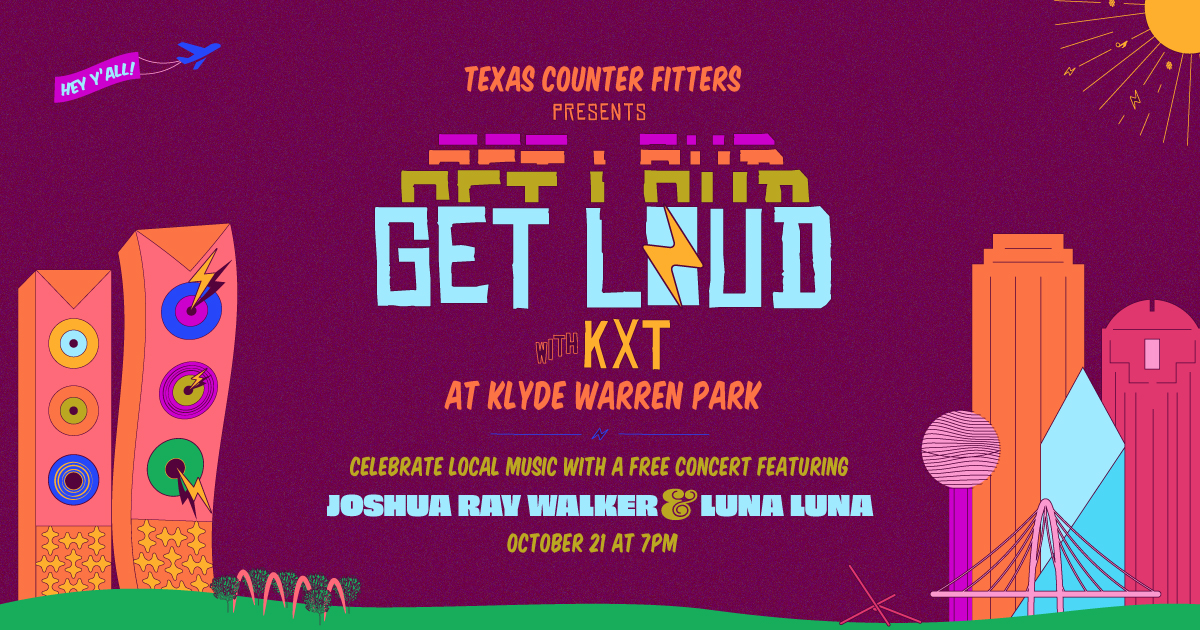 KXT 91.7 FM is thrilled to present Get Loud with KXT — a free concert on Friday, October 21, 2022, at Klyde Warren Park in downtown Dallas, sponsored by Texas Counter Fitters. The event will celebrate North Texas music, with special performances from Joshua Ray Walker and Luna Luna.

KXT is proud to be the official radio station for Klyde Warren Park and to support the park’s music endeavors through key events, including Get Loud with KXT. This special concert is also part of the nonprofit music station’s annual celebration of Local Music Month. Every October, KXT highlights North Texas’ vibrant music scene by incorporating even more local music into its playlists.

“We are so excited to have Joshua Ray Walker and Luna Luna playing Get Loud with KXT,” says Benji McPhail, Program Director of KXT. “What a great way to wrap up Local Music Month and put a spotlight on the amazing North Texas music scene in such an incredible setting.”

Dallas native Joshua Ray Walker catapulted himself into the international spotlight with his 2019 debut, Wish You Were Here. His electric stage presence and fresh take on country music makes him a performer worth watching.

Dallas four-piece Luna Luna is grounded in their self-described world of “sweetheart jams.” Their euphoric, throwback, synth-pop grooves will have listeners eager to hear more.

Food and beverages will be available for purchase from local food trucks. Doors open at 6pm. Get Loud with KXTis free and open to the public, however registration is highly encouraged to receive updates closer to the show — you can do that right here.

Texas Counter Fitters (TCF) is a Dallas-based importer and distributor of natural stone from around the globe. Founded in 2016 by co-owners Chris Blackburn and Andrew Gilbert, TCF specializes in providing custom stone products to discerning designers, builders and homeowners across Dallas-Fort Worth. There is no project too big or small for TCF, which offers access to thousands of slabs and colors of natural and engineered stone. Today, TCF sources stone from dozens of countries around the globe, ranging from ancient sources in the Mediterranean regions of Italy and Spain to widespread quarries across Brazil and South America. Once imported, TCF houses this one-of-a-kind art — in the form of natural stone — in its expansive Richardson-based showroom. Customers have the opportunity to explore a vast array of unique stone that can be customized to their needs. TCF also offers fabrication and installation services for customers seeking an all-in-one service.

Klyde Warren Park is a 5.2-acre deck park bridging uptown Dallas to downtown Dallas. The Park is privately funded and operated by the nonprofit Woodall Rodgers Park Foundation to connect the community and enrich lives through free, active programming and educational opportunities in a pristine and safe, centrally located, entertainment-rich green space where everyone is welcome. The Park’s equitable access proved a critical lifeline during the pandemic for patrons seeking exercise, solace and community building. By safely staying open, the Park offered a unique respite for visitors, helping to reduce anxiety and restore physical, emotional and mental health. Corporate partnerships, individual donations and grants ensure that this mission will continue into the future.

Once the best-kept secret of Dallas’ music scene, Joshua Ray Walker catapulted himself into the international spotlight with his 2019 debut, Wish You Were Here. An album of character-driven songwriting and golden-era Texas twang, Wish You Were Heredid not just nod to the larger-than-life troubadours who had inspired Walker’s craft — it brought him into their ranks, too, adding Walker’s name to the shortlist of songwriters’ worthy of carrying the torches of Guy Clark, John Prine, and Blaze Foley.

Originally the solo project of Colombian-born, Dallas bred Kavvi, Luna Luna grew into a four-piece through serendipitous meetings. Beginning his journey towards music as a 14-year-old tinkering with GarageBand on his iPhone, singer-songwriter Kavvi began recording under the Luna Luna moniker in 2017. Upon meeting Danny Bonilla after he asked him to stick around for his set at an open mic during where they shared the bill, it quickly became apparent that they felt drawn to expand into a duo. Before long, drummer Kaylin Martinez and bassist/backup vocalist Ryan “Gordo” Gordon fell into place, drawn together from performing house shows around Texas. Their kinetic friendship is on full display on their debut LP Flower Moon, built around Kavvi’s original idea of a lost boy confused about life and turning to the moon for answers. Across the album’s 10 tracks, the band members’ various influences come together, and it feels like we’re taking part in a blissed-out night of conversation amongst friends. Luna Luna is no doubt one of the buzziest acts in Dallas today and key players have already started taking notice.