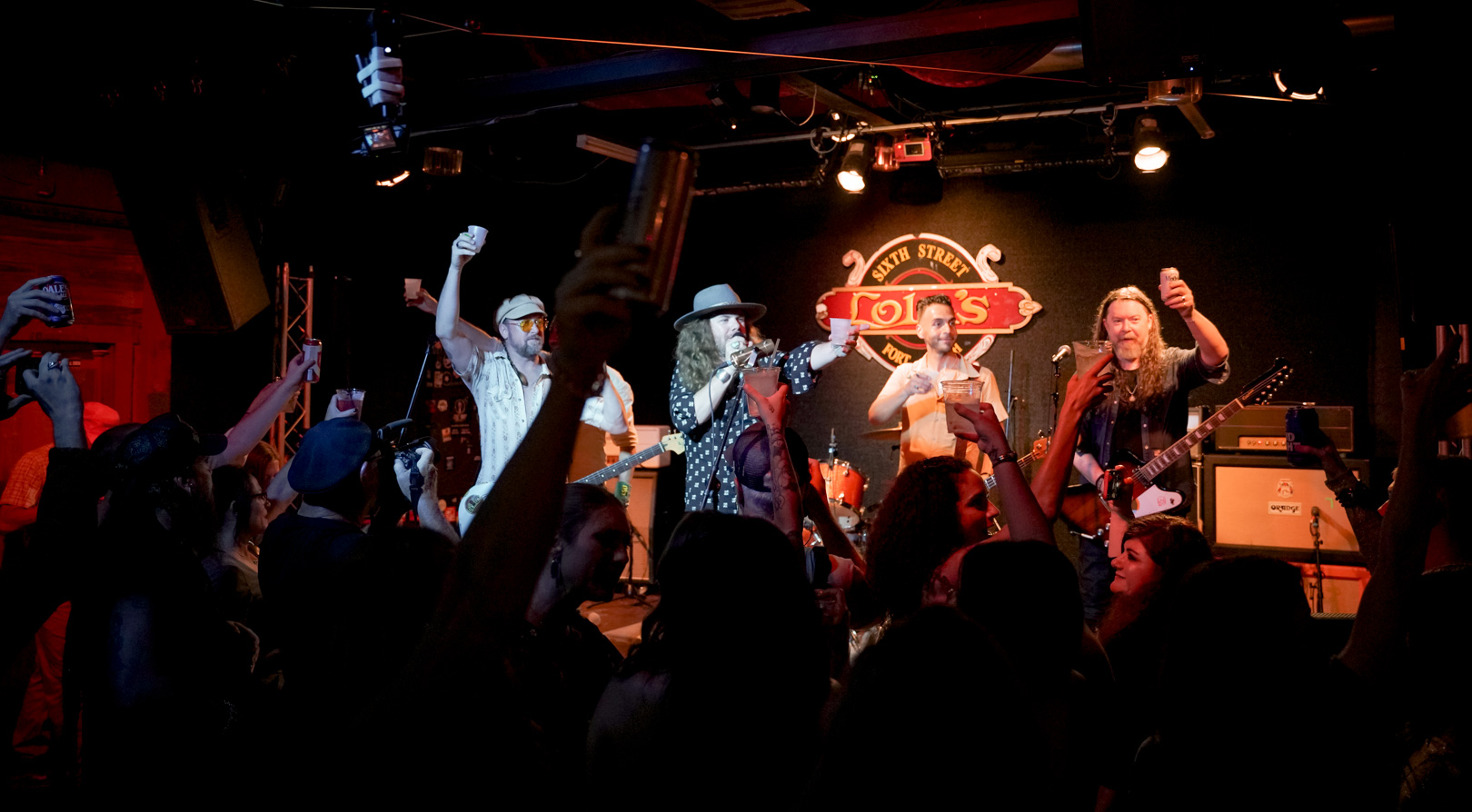 A few tears were shed this past Friday night, as Lola’s Saloon celebrated its last weekend at the legendary 6th Street location. The iconic venue will be moving to a new location, as the neighborhood continues to sell buildings and change the landscape for small business owners.

Like Fred’s Texas Cafe and Magnolia Motor Lounge, which have also been challenged to move, Lola’s will be finding greener pastures at 2000 W. Berry Street, which is already being renovated for the move. (Magnolia Motor Lounge will be open at their current location until November)

“The new place is bigger inside and has a kitchen,” Lola’s owner Brian Forella said. “And Dayne’s Craft BBQ is coming.” 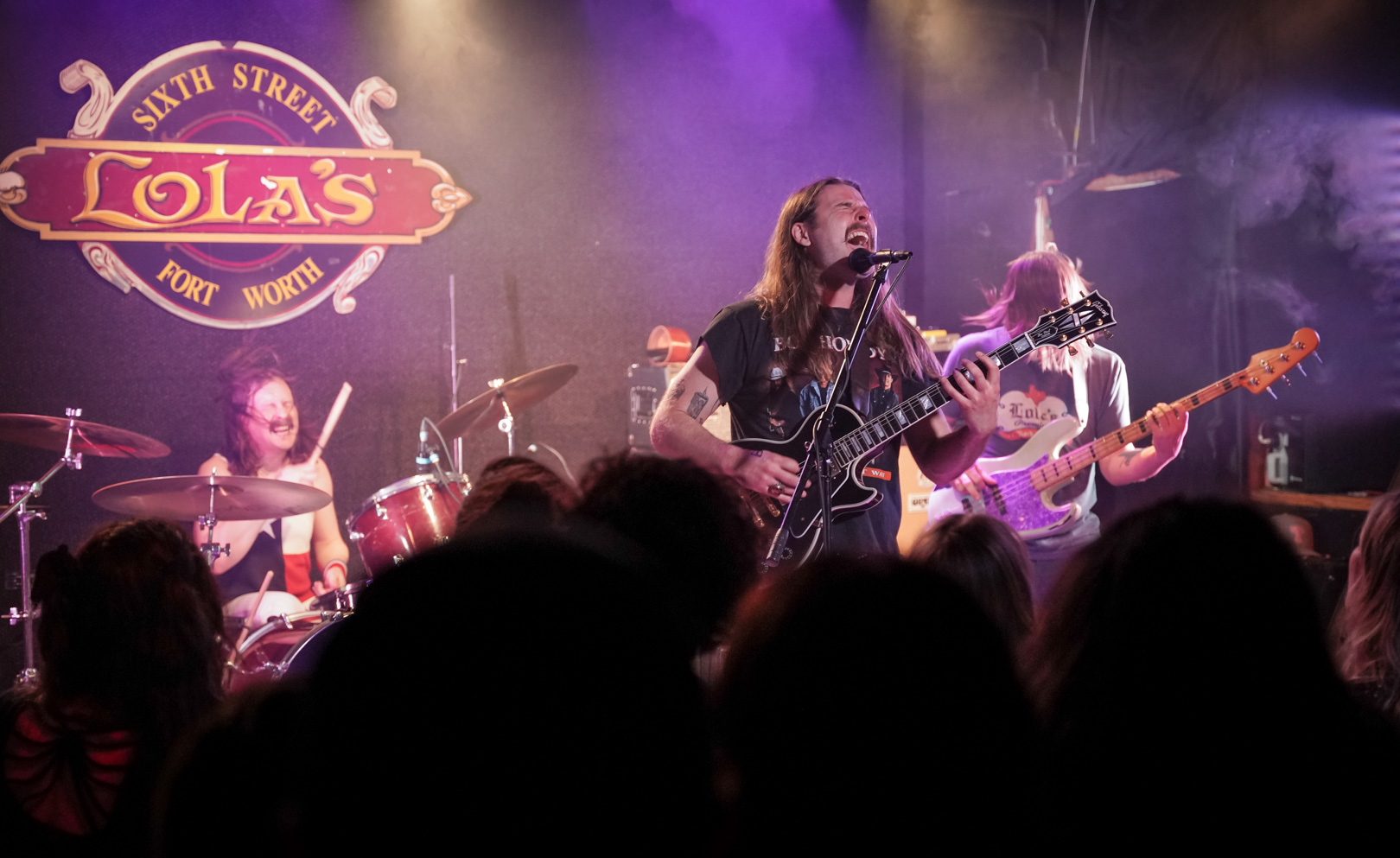 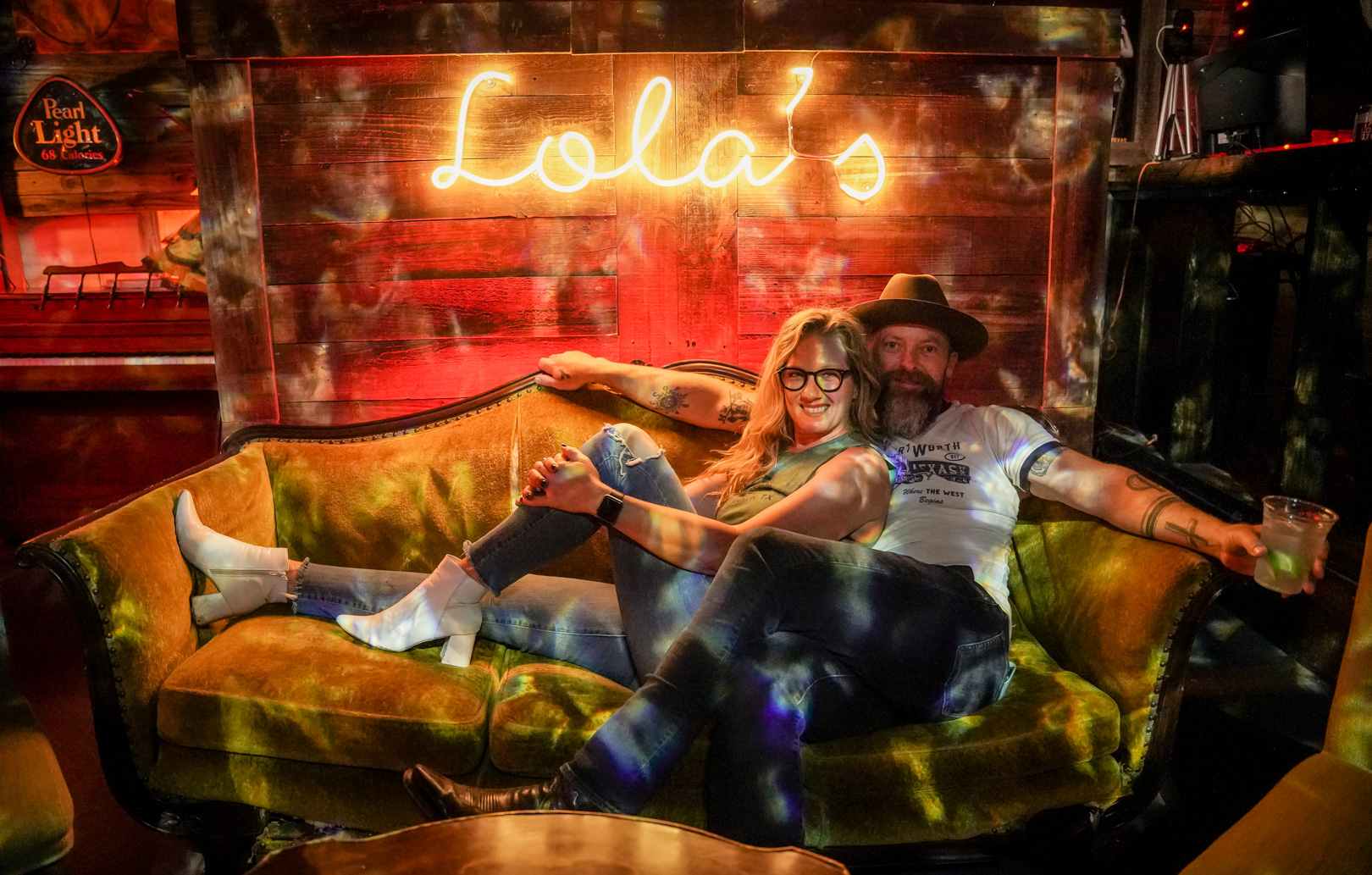 Honey Russell and Sean Russell take a moment to get a photo on the Lola’s neon sign couch. Photo: Jessica Waffles

Music lovers have been coming to Lola’s Saloon since it opened in 2008, after Forella’s previous bar The Wreck Room closed in 2007.

“Out of the gate we had great bands,” Forella said of Lola’s. “Lance Yocom was the head of Spune back then, and those dudes killed it. They were our first booking agency. They put shows in the old Wreck Room.” 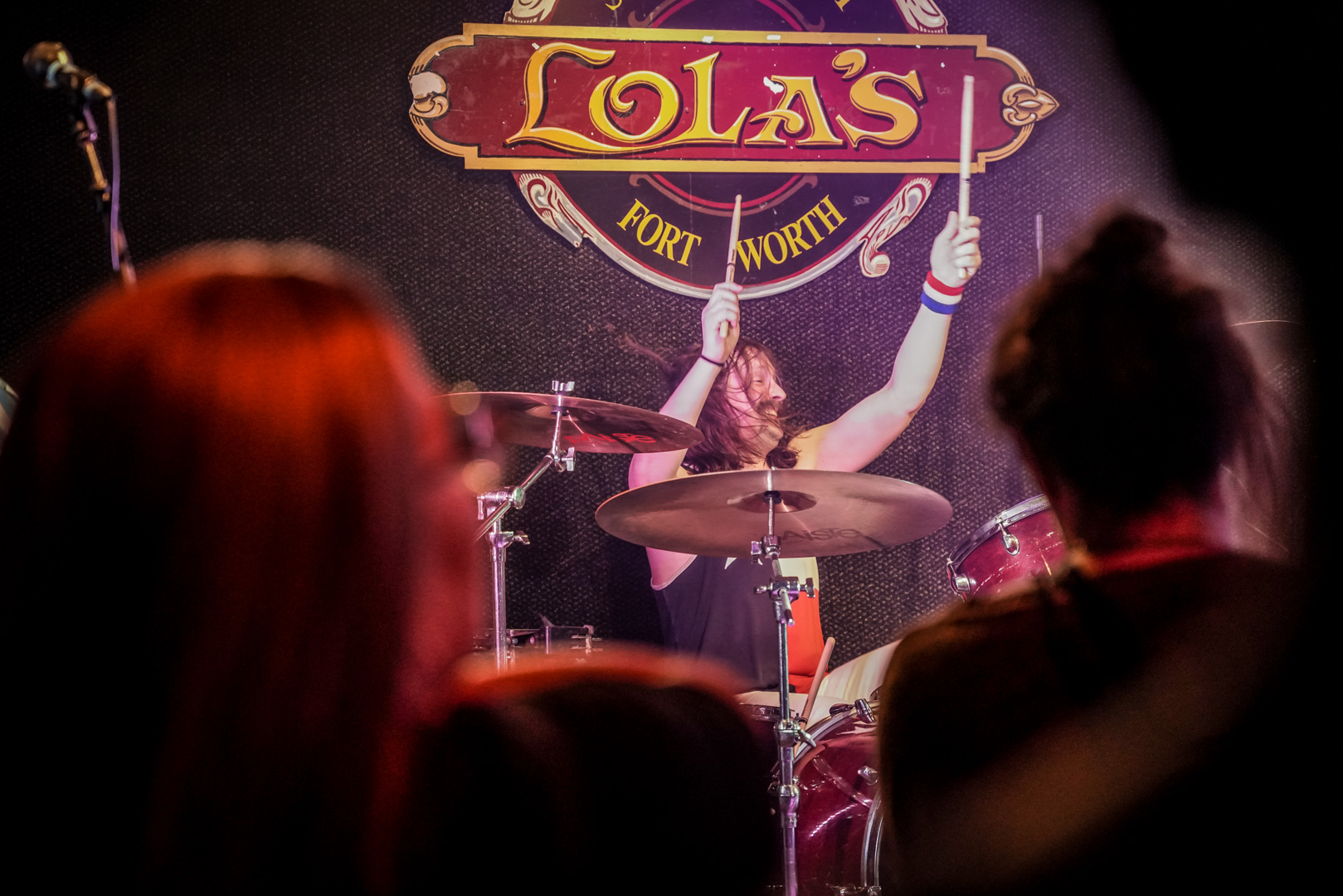 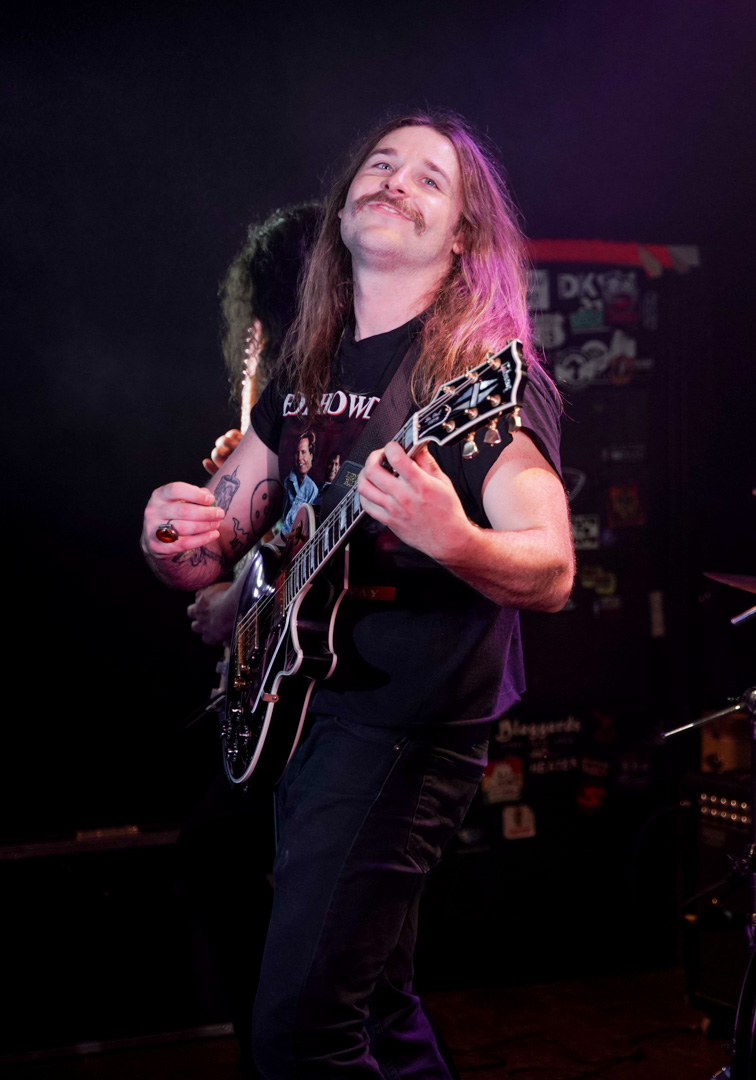 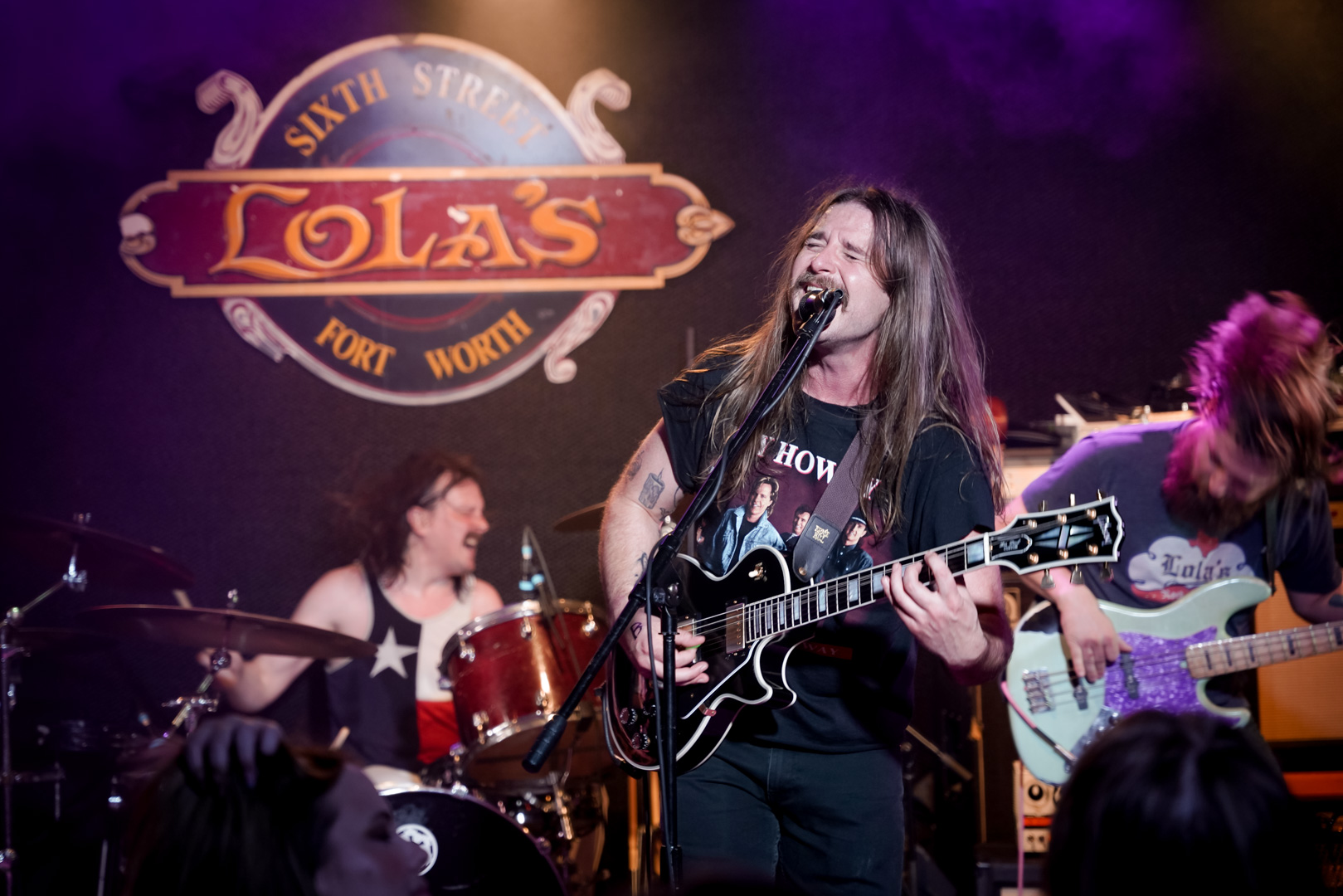 The Friday night event was called “The Last Stand,” and featured Arenda Light opening the show, followed by The Me-Thinks, with Royal Sons closing the night out. There were dancers at the front of the floor all night, and the vibe never wavered.

Saturday night featured the Vandoliers, Sam Morrow and The Band Laredo (not pictured in this article).

At the show, many people were nostalgic for the years spent in the elevated dive bar. Some people now in their 30s spoke of having frequented the bar over 10 years, and hundreds of bands got their feet wet on the Lola’s Saloon stage. 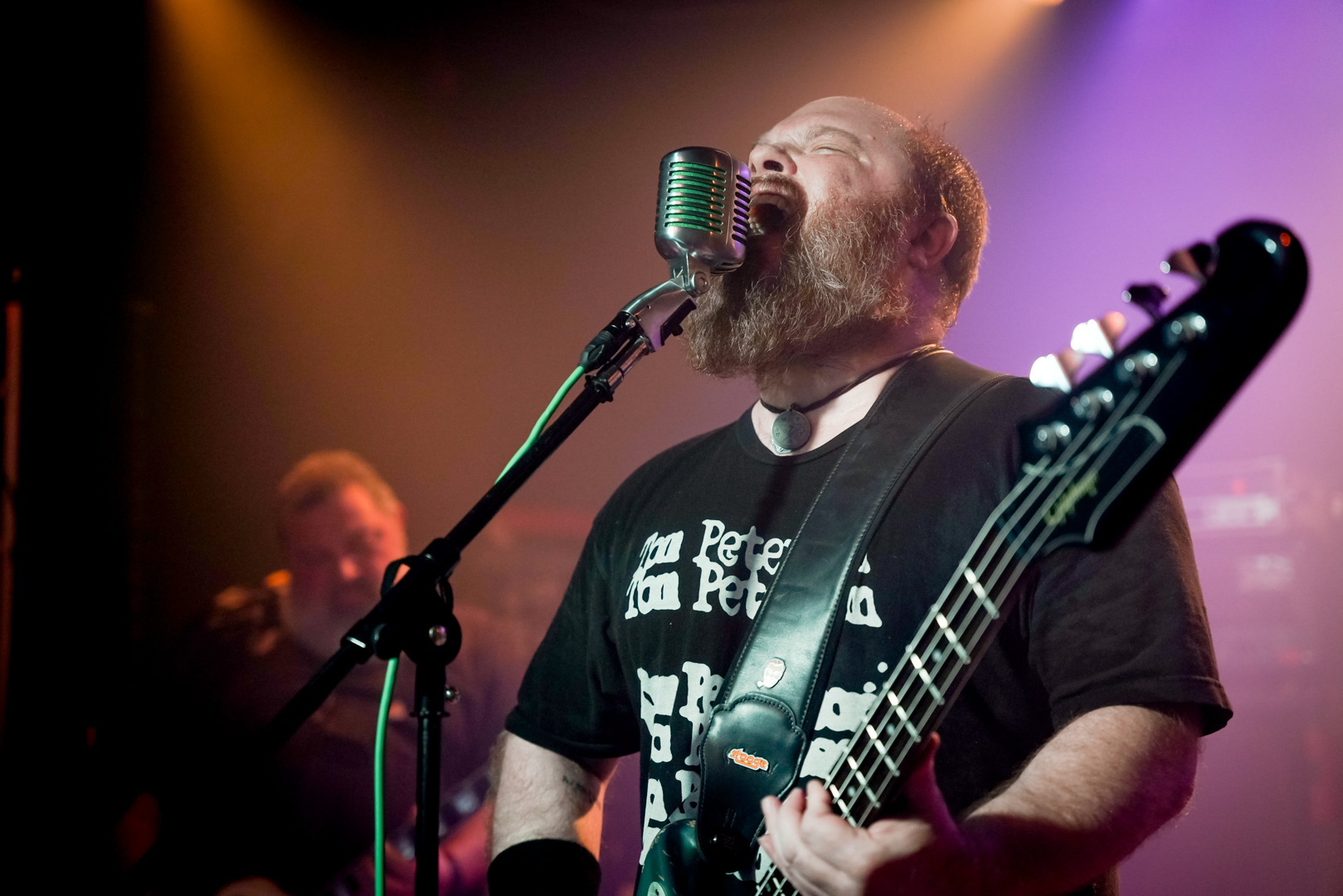 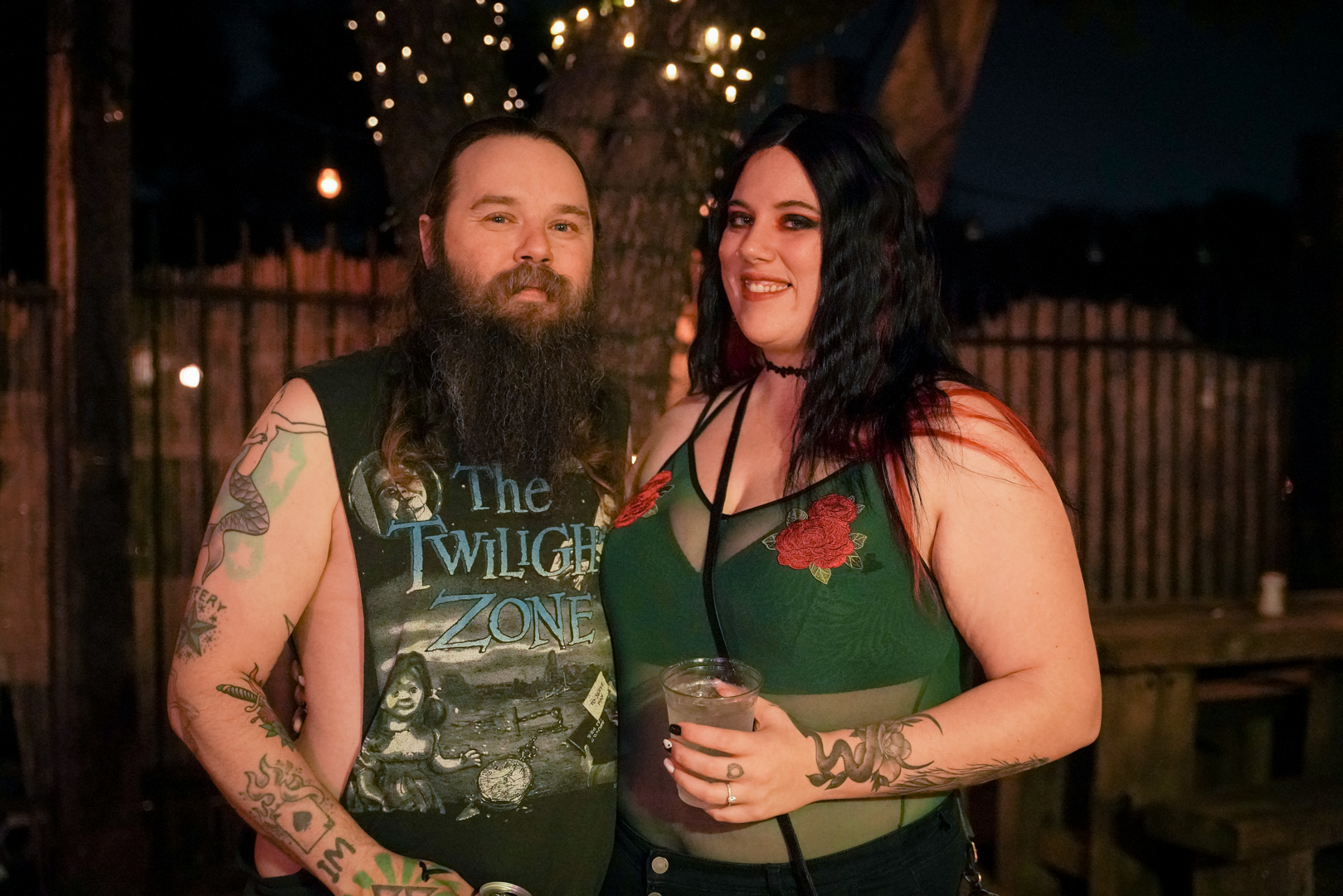 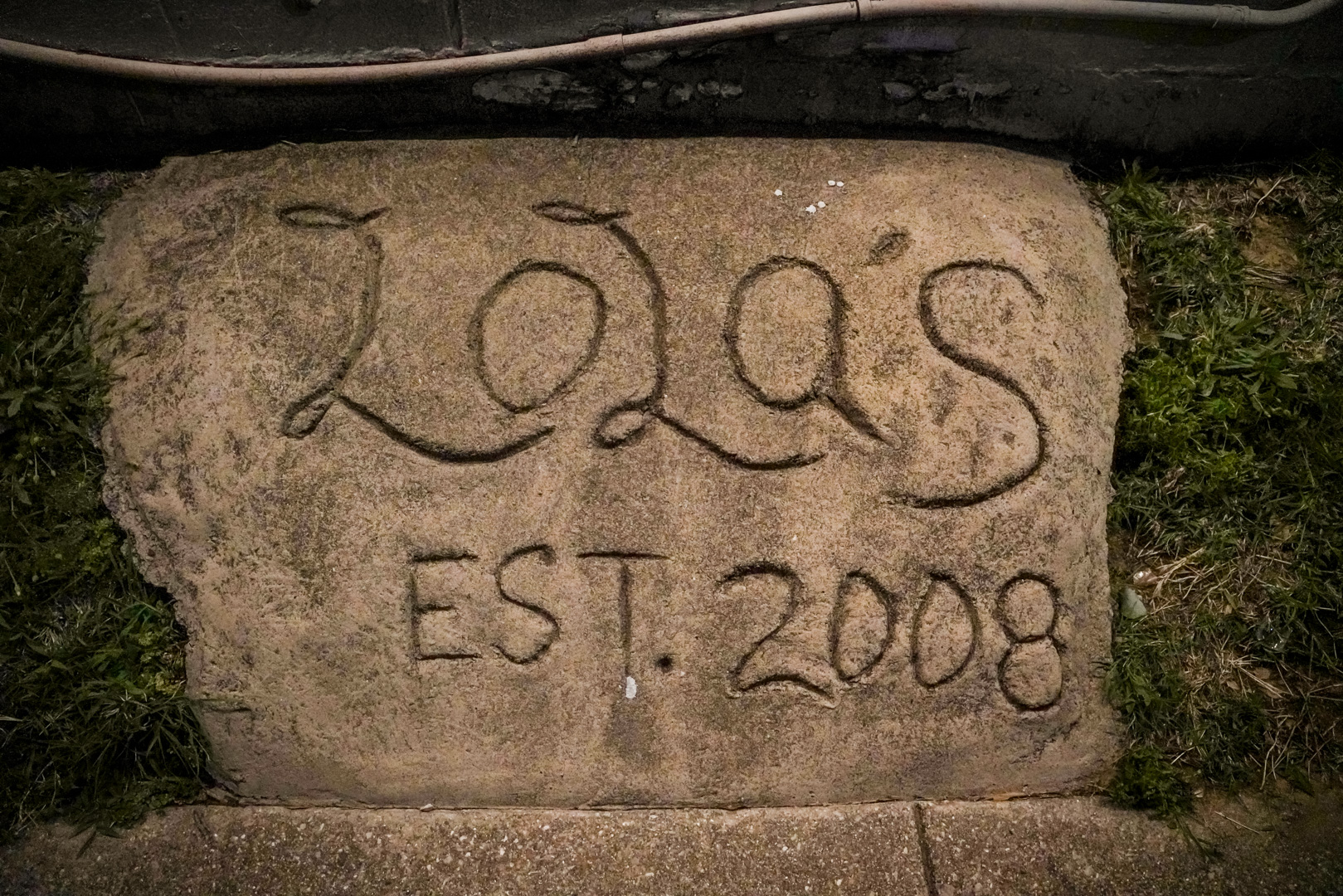 A piece of engraved cement outside of Lola’s. Photo: Jessica Waffles

“I’m 52 now, this is what I wanna do,” Forella said. “I wanna promote local, local, local. I’m not trying to compete with Tulip’s or Granada. Those guys do a really great job. We’re just doing our thing and having a good time. The rummage sales, farmer’s markets and crawfish boils help give us the flexibility to have fun shows.”

On Friday, the Royal Sons called Forella up to the stage at the end of their set. He spoke to the crowd and the band, thanking everyone for making Lola’s possible. It’s been a cultural institution in the community, and “Fort Worth’s Music HQ.” 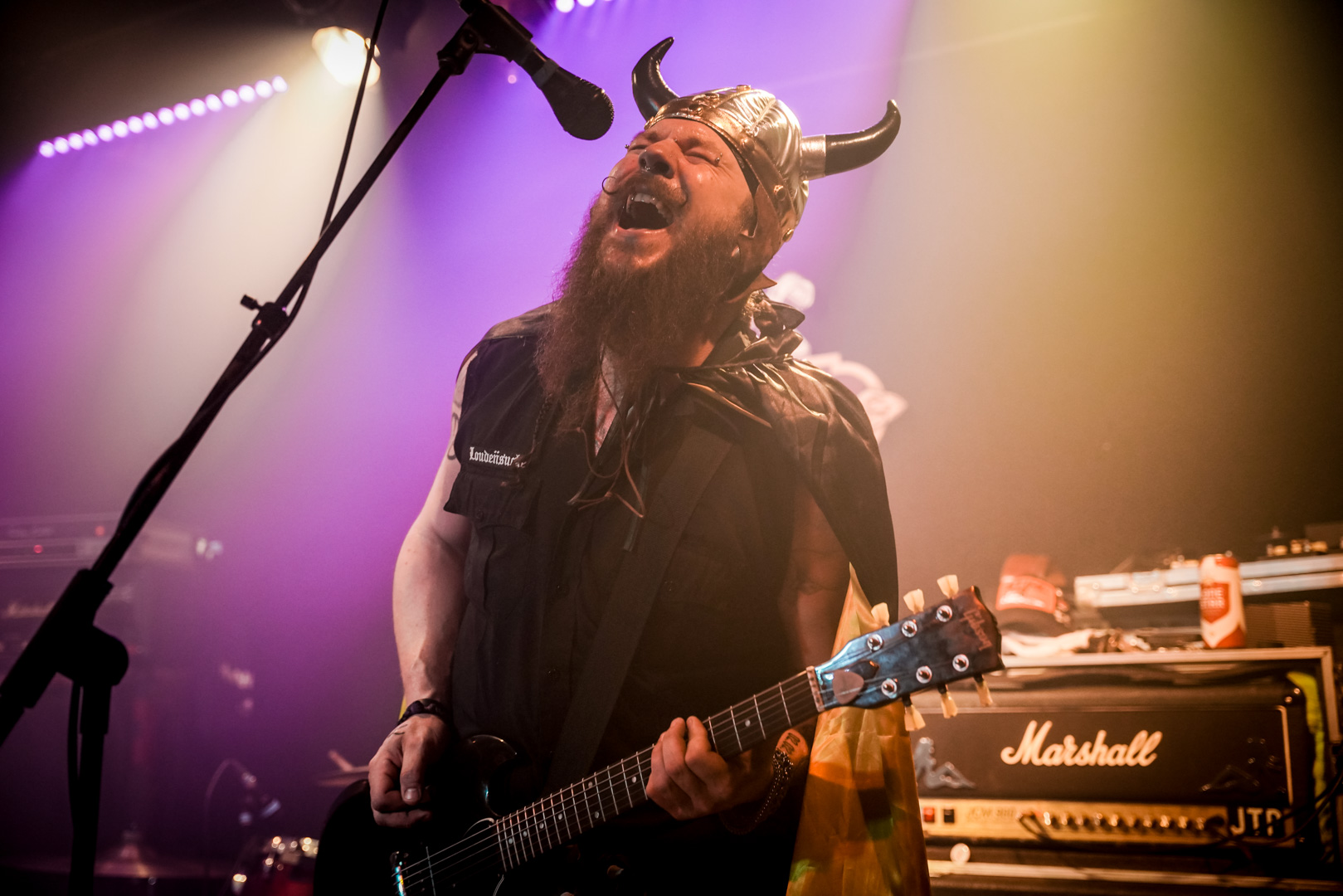 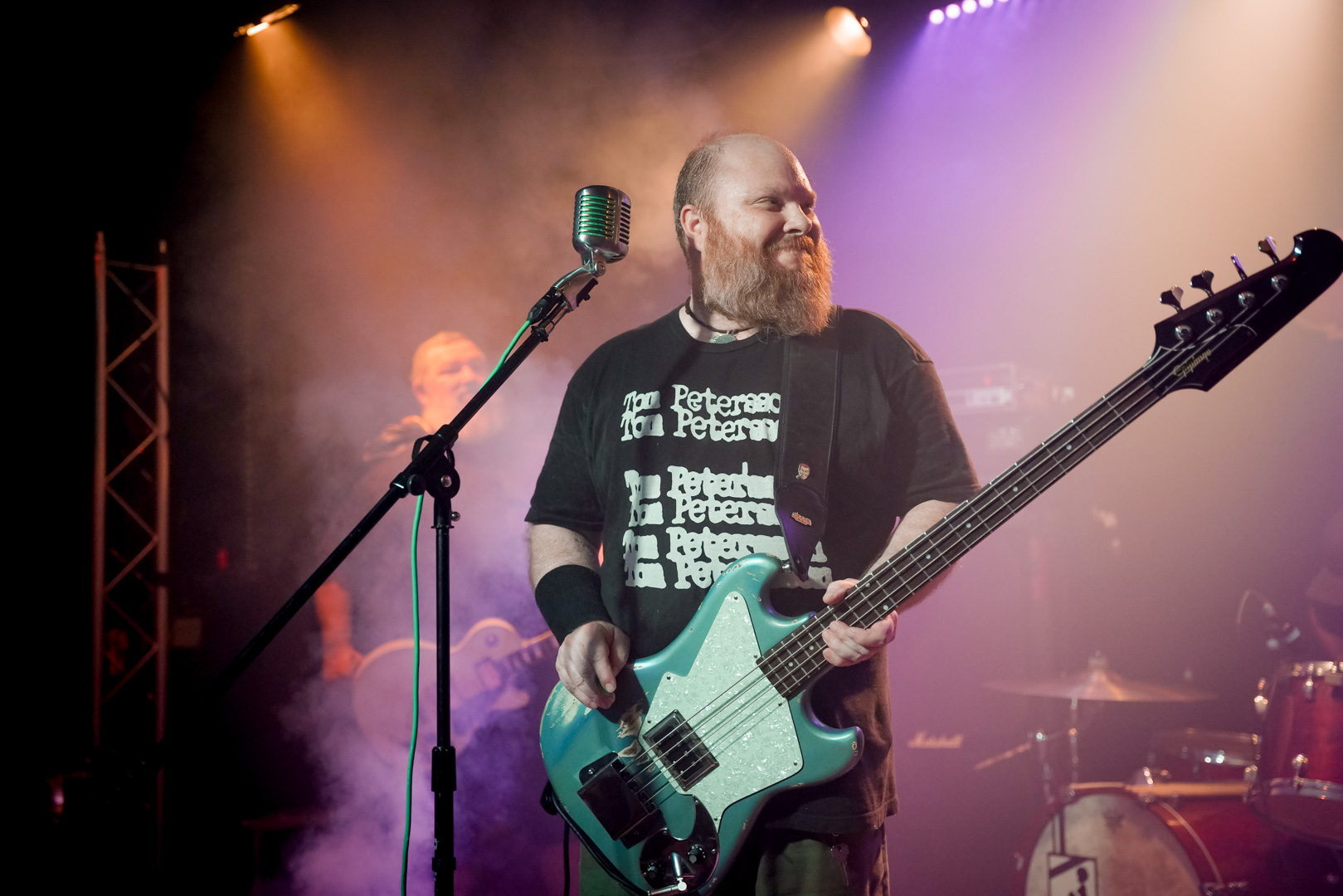 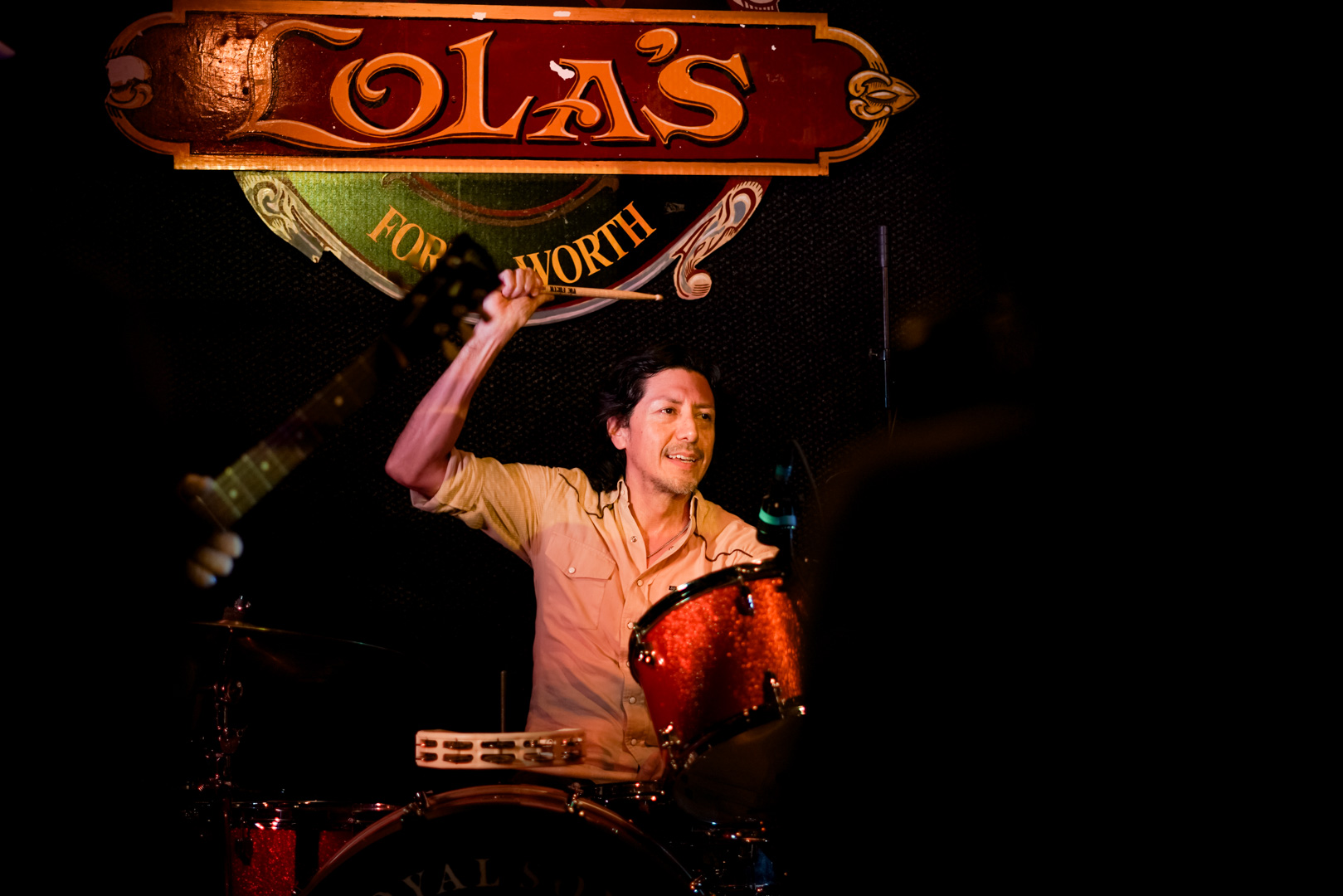 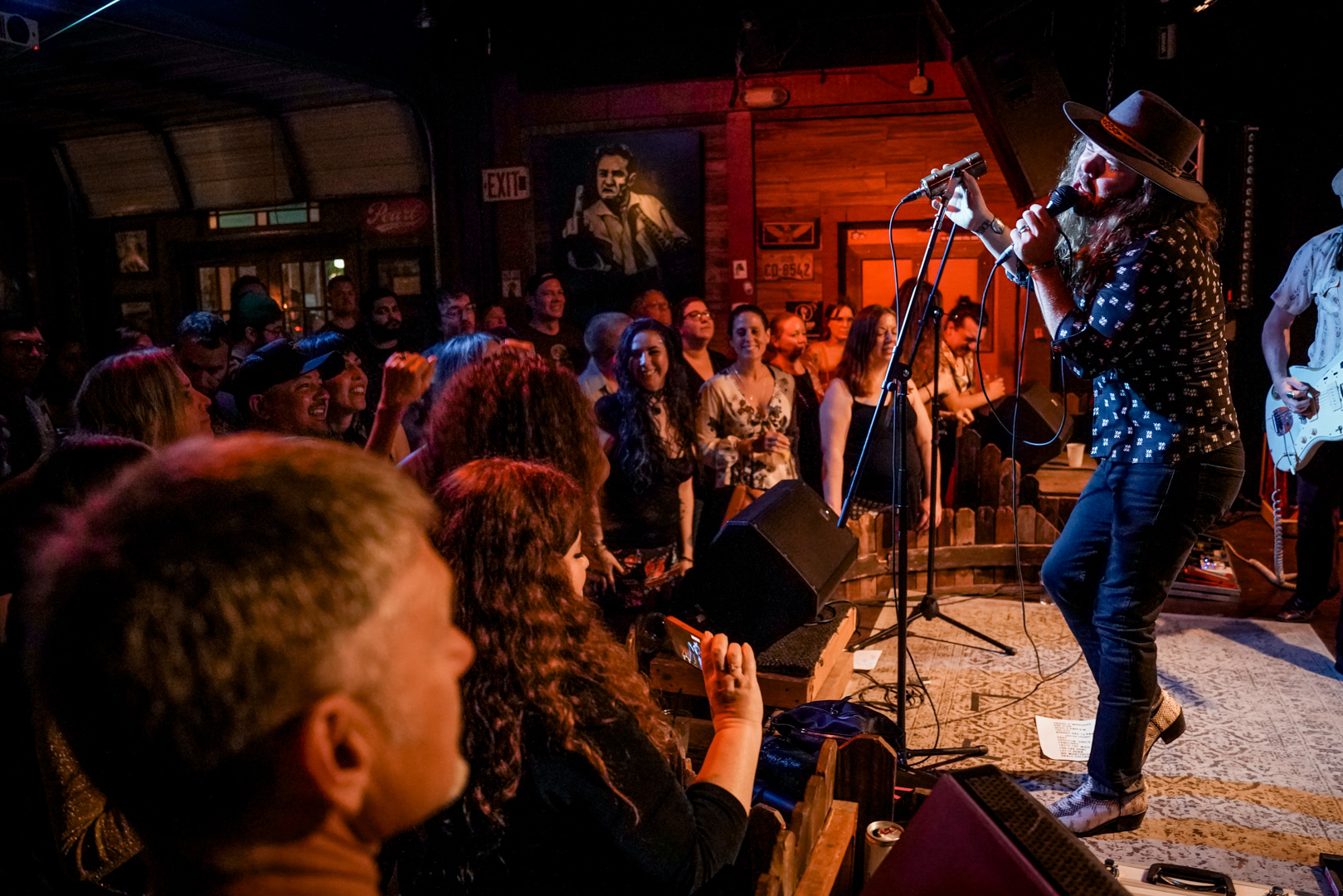 The Royal Sons played to a full crowd for the last Friday night at the original Lola’s Saloon location before the big move to a new space. Photo: Jessica Waffles

At the end of the night, I had the unique pleasure of witnessing a tender exchange between Forella and Royal Sons front man Blake Parish.

They reminisced in the back office about the accident that Forella experienced about a year and a half ago, when he fell off the more than 2-story roof of the Trailer Park while installing shingles. “I was terrified,” Parish said. “I thought you were dead. I thought even if you kinda got sort of healed again, you wouldn’t walk again. It’s a miracle you didn’t die, Brian.”

While Forella was in recovery during that time, Parish was a piece of his support system. It reminded me of the deep connections that music creates. The friendships made in the music scene are often built on mutual values of the power of music and community.

“You changed my life,” Parish said to Forella.. “You allowed me to grow, and that growing allowed me to leave here and grow more.” 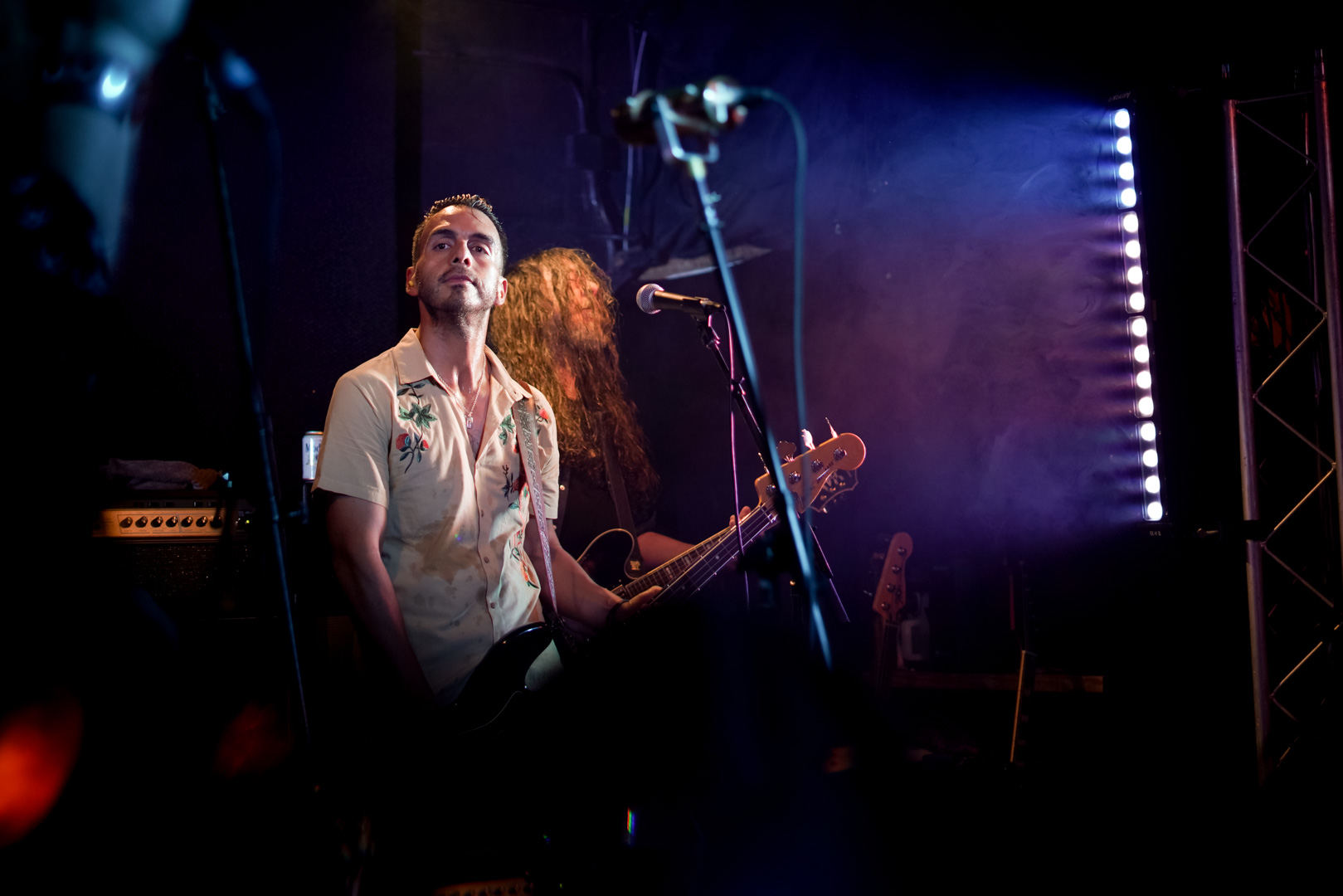 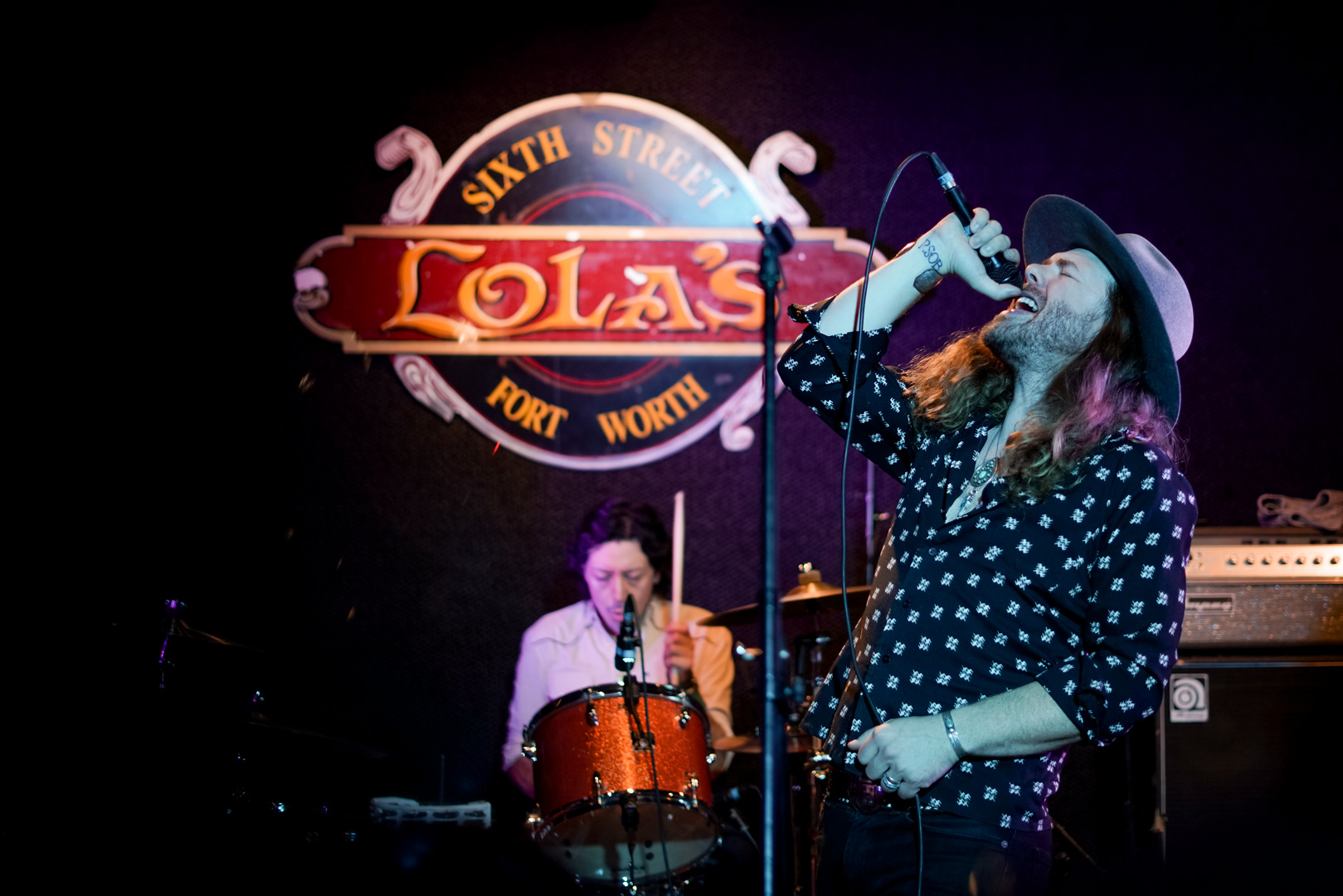 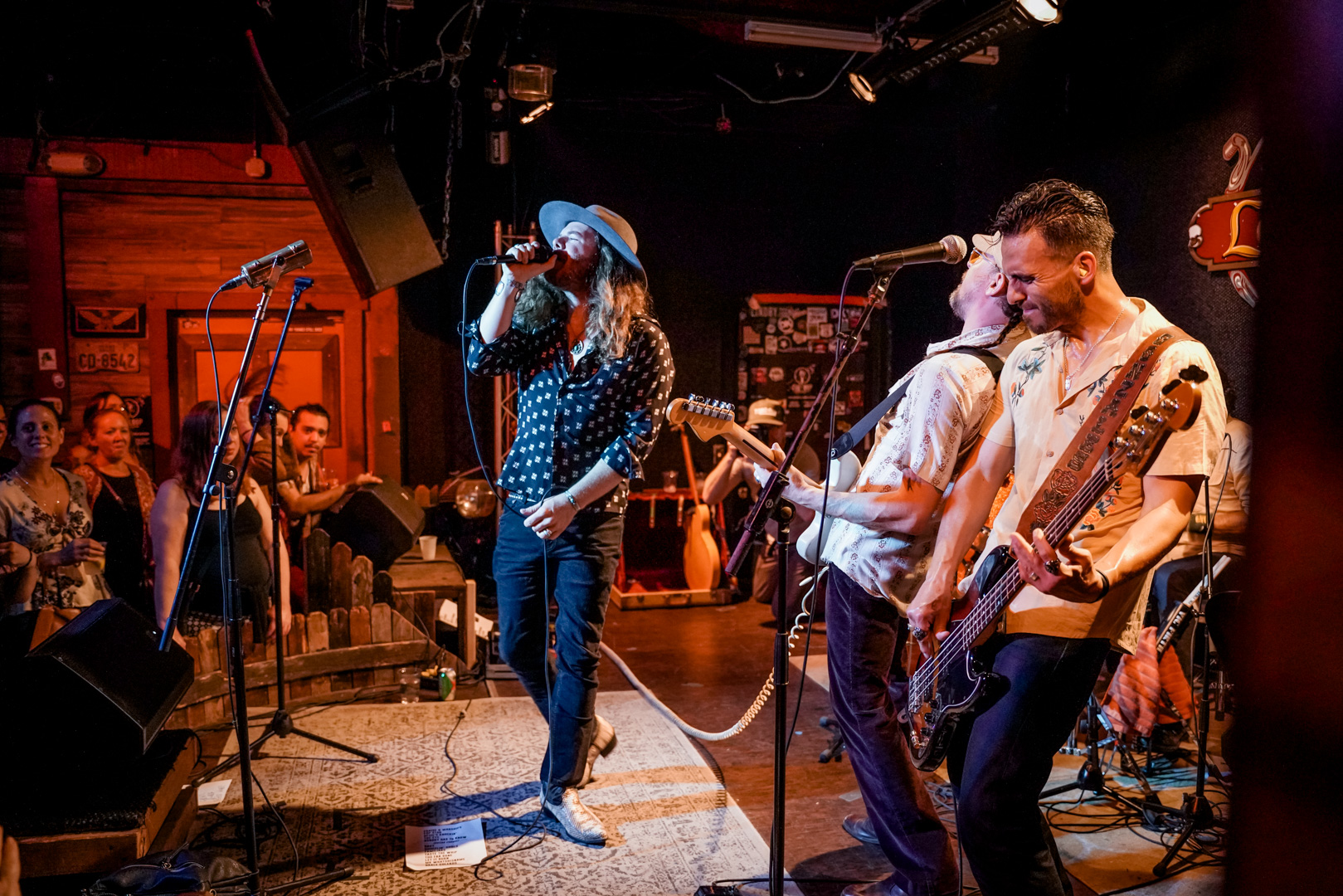 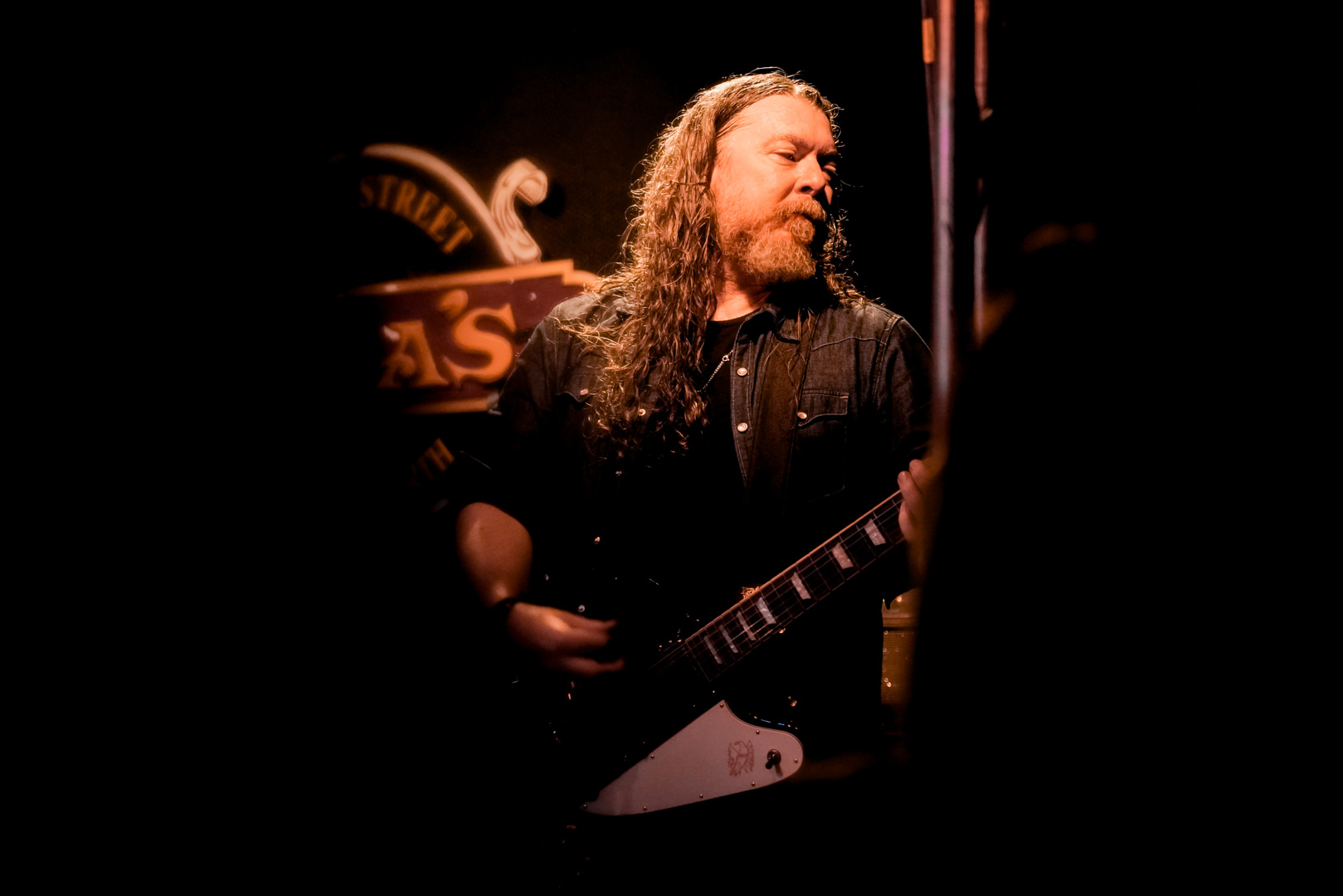 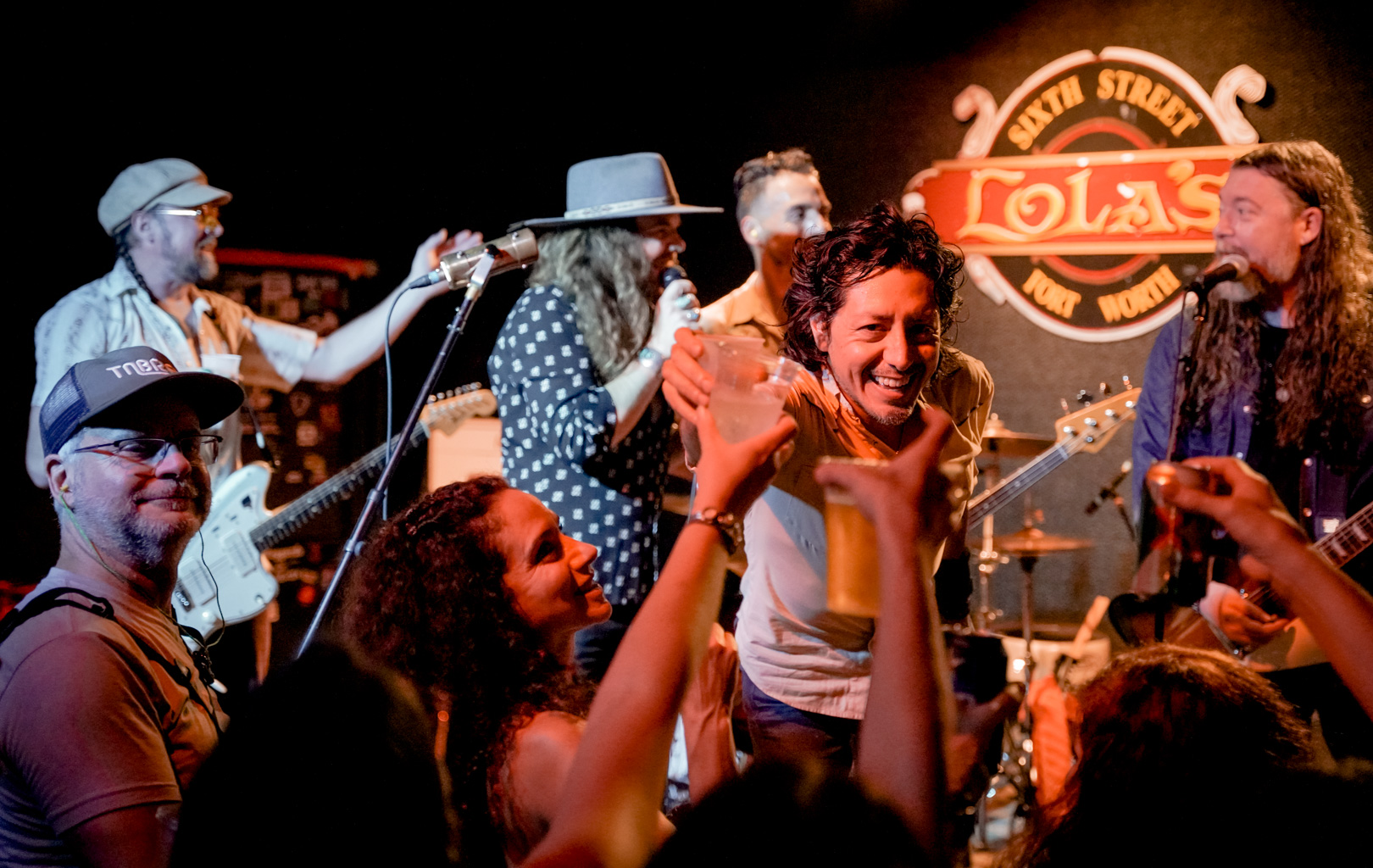 A moment of joy in a bittersweet night of saying goodbye to the original Lola’s. Photo: Jessica Waffles 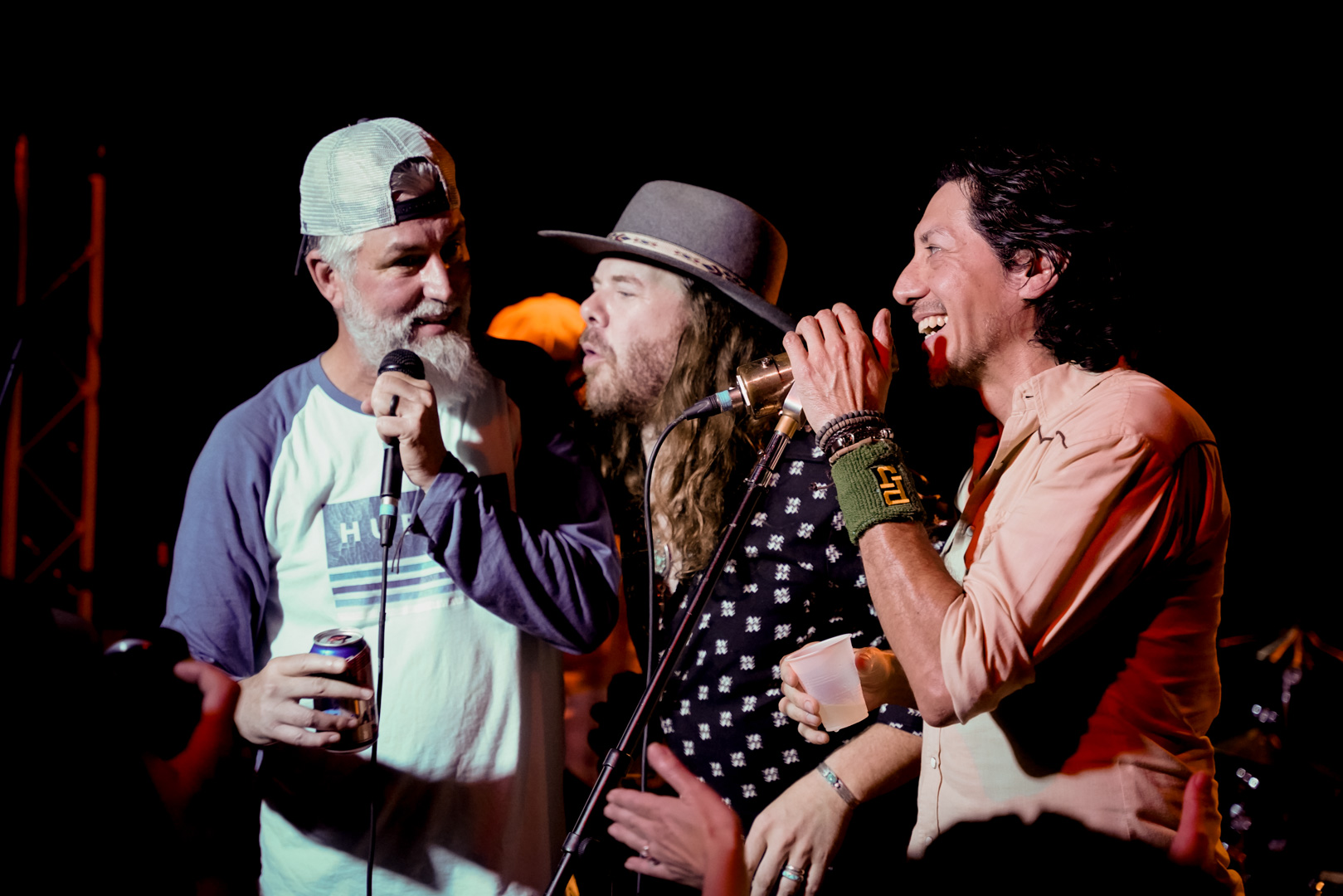 Lola’s owner Brian Forella on stage with Blake Parish and Javier Garza, closing out the night with a few words about the years Lola’s has been a cultural hub for the community. Photo: Jessica Waffles

Lola’s Trailer Park will still be open until the end of the month, which will close out its legacy on May 28 with “Revenge of the Beards,” a beard and mustache championship event. More events leading up to close can be found on Lola’s calendar.

The new Berry Street spot will simply be called Lola’s Fort Worth, dropping the saloon and trailer park names. The soft opening will happen early-mid June, and Forella said that by July they expect to be able to bring back Lolaspalooza, an event that will feature secret Fort Worth headliners.

“We just gotta make sure it all works,” Forella said. “I’ve been doing this for a hot minute, so everything should be great.” 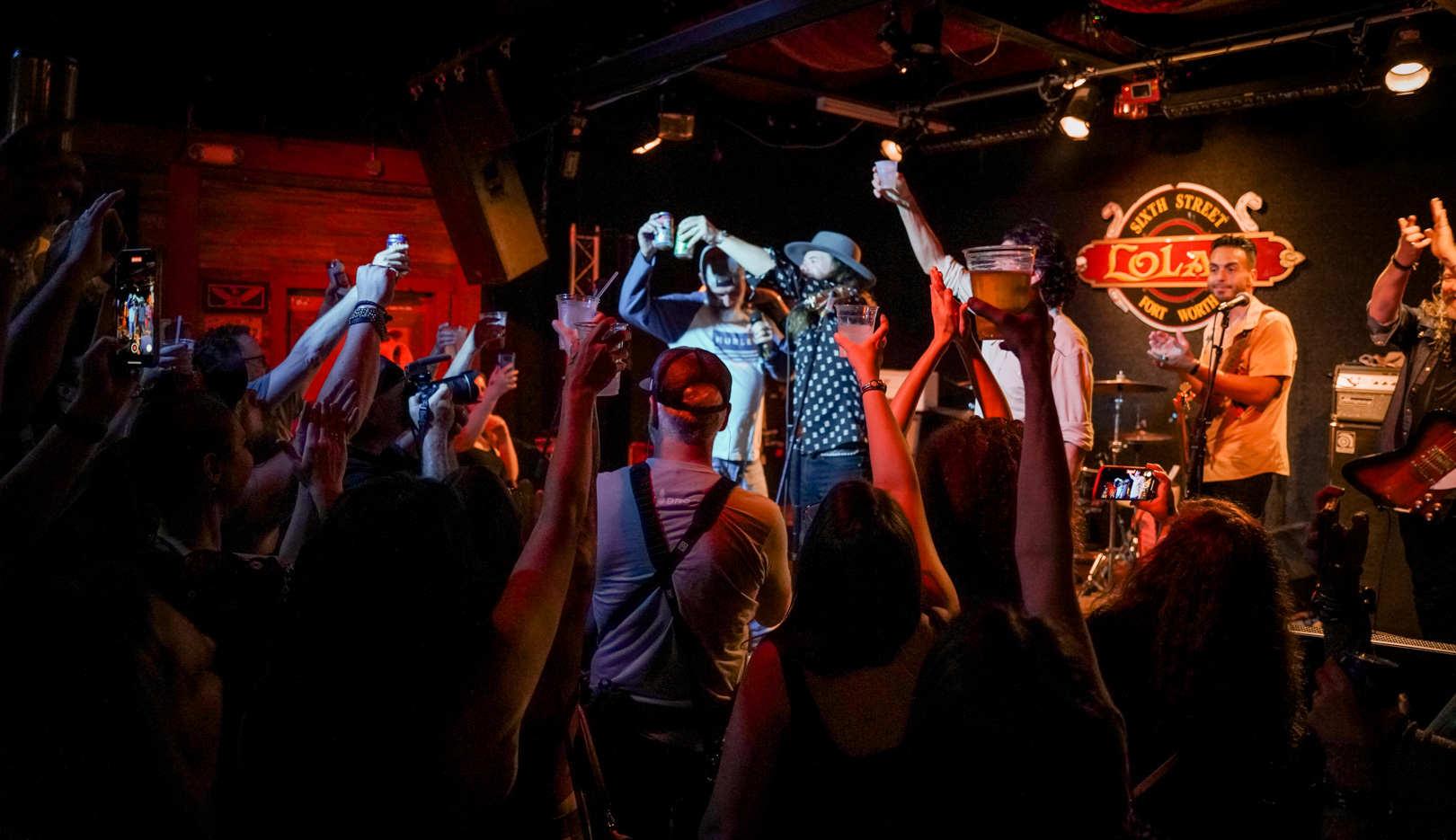 A final cheers with Brian Forella on stage with the Royal Sons on Friday night for the Lola’s Saloon send-off weekend. Photo: Jessica Waffles 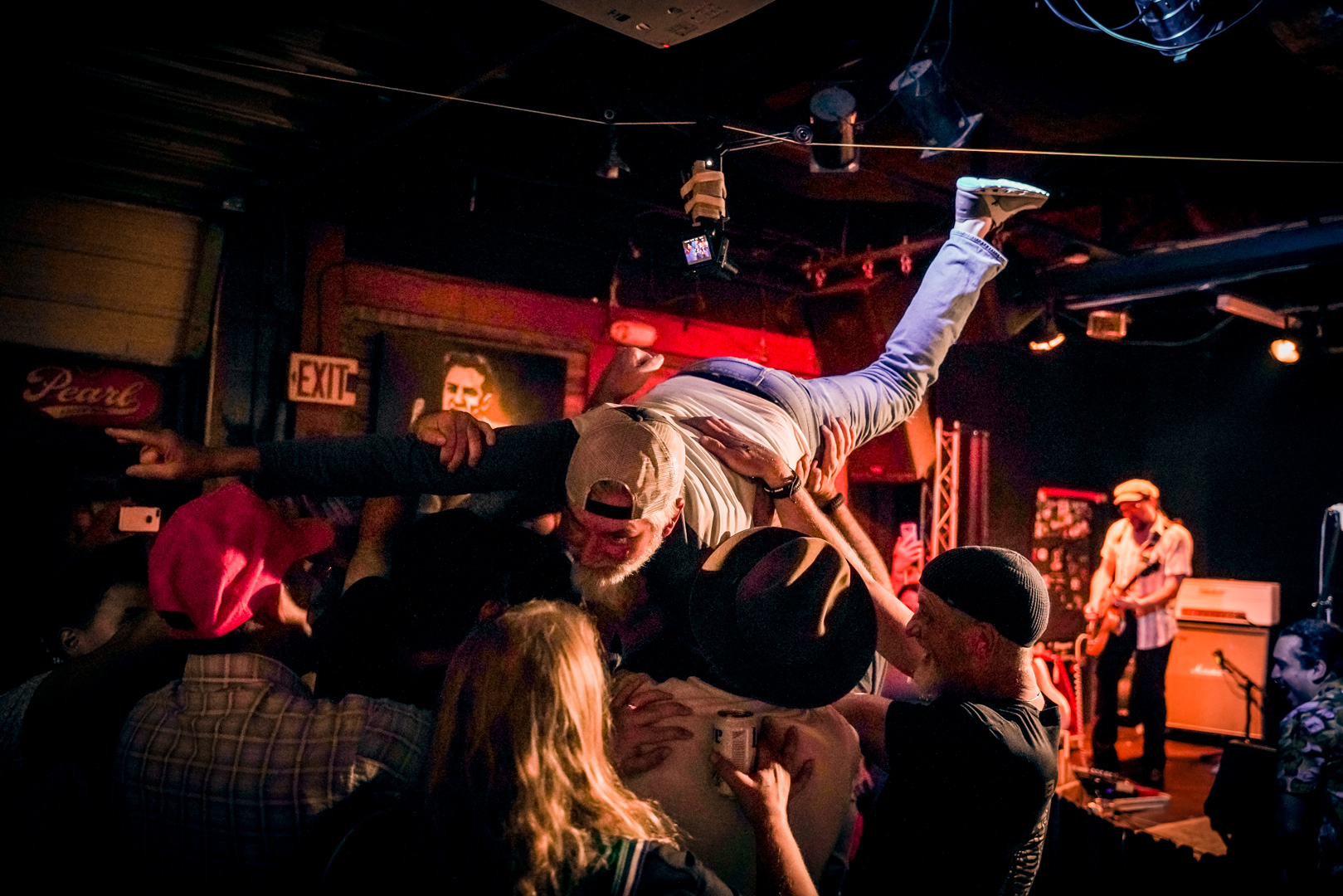 Brian Forella made a stage dive into the crowd during the Royal Sons’ final encore song at Lola’s Saloon. Photo: Jessica Waffles 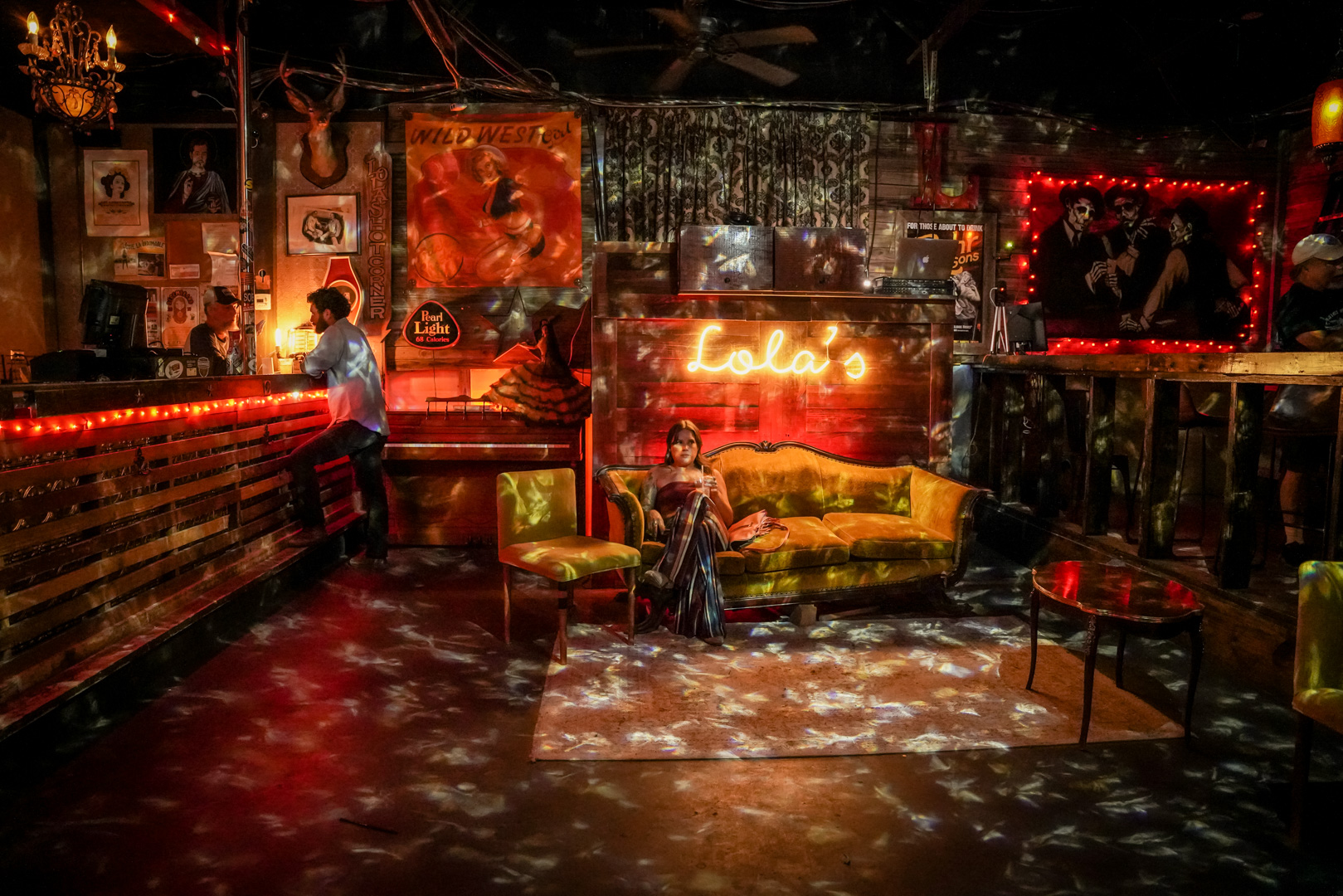 The final Friday night 2am closing time at the legendary Lola’s Saloon after 14 years of service. The new location plans to have a soft open in mid-June 2022. Photo: Jessica Waffles