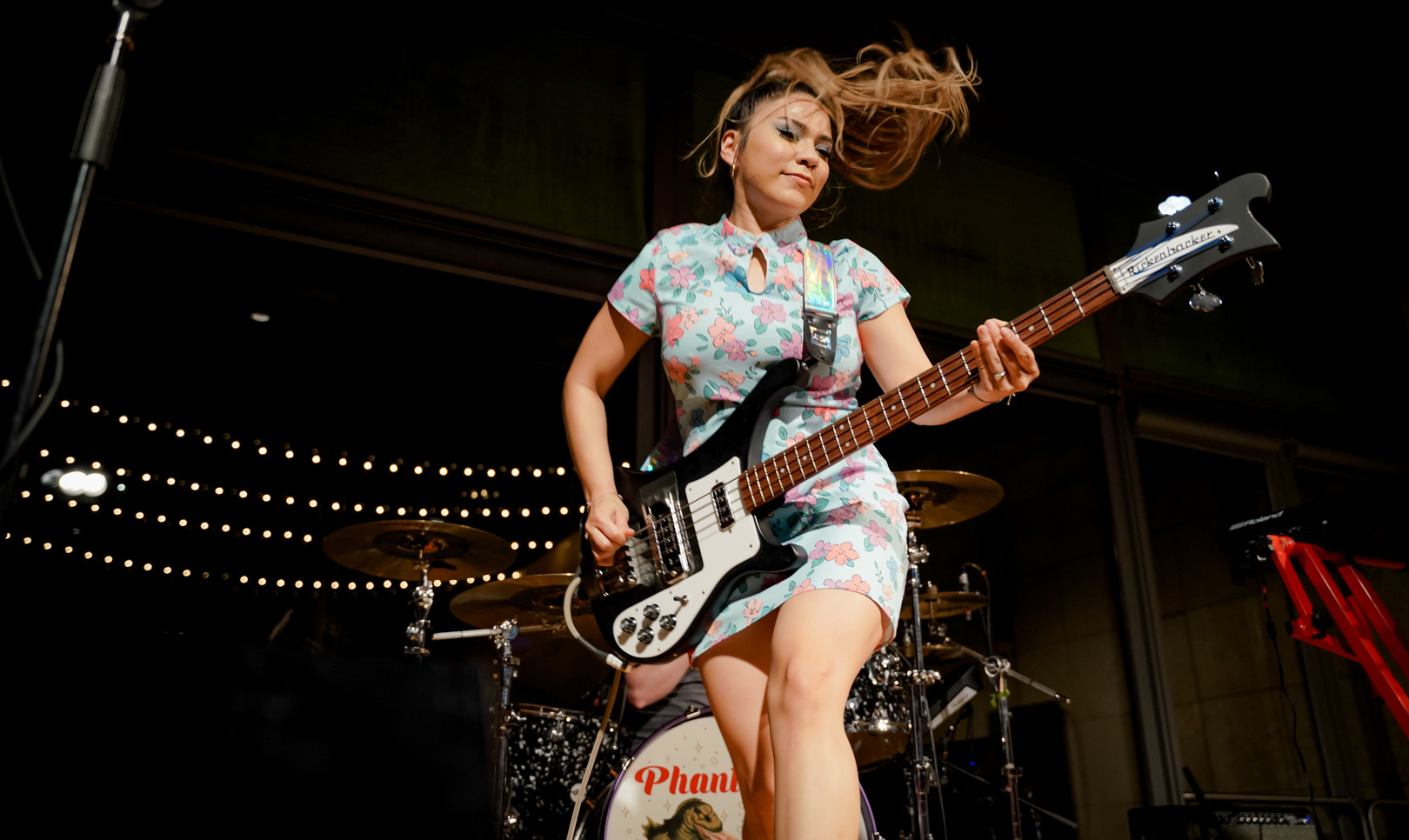 Panda Cuenca plays during ’til Midnight at the Nasher. Photo: Jessica Waffles

The Nasher Sculpture Center hosted its free event ’til Midnight at the Nasher last weekend, showcasing musical artists Huo Feng Trio, Cabus, Goisagi, and Phantomelo. The night closed out with a screening of Moana.

Though the event is normally held in the outdoor sculpture garden area, the festivities were moved indoors due to inclement weather forecast. 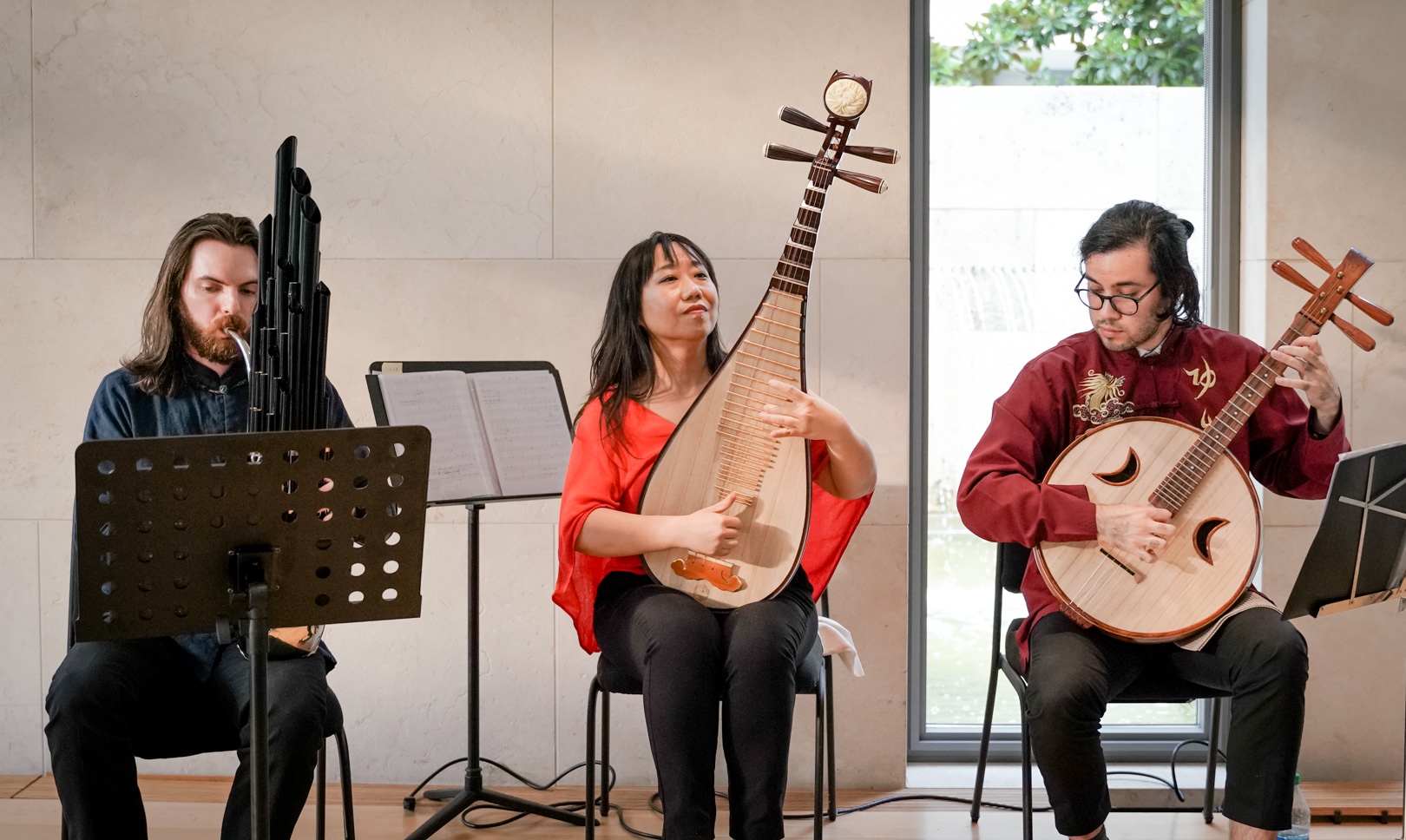 Featuring 2000+ year-old musical instruments, the music created by this act transports the listener to an ancient time. Alexander Strader plays the sheng, a free reed wind instrument that typically consists of a set of bamboo pipes based on a chromatic scale. Aesthetically and musically, it is comparable to a pipe organ, though the sheng was its predecessor.

Yuxin Mei plays the pipa, sometimes called the “Chinese lute.” She uses artificial nails to plucks its strings during performance. Lexi Moreno plays the ruan, whose fretted neck is familiarly similar to a guitar neck, though it is 2000 years older than the invention of the guitar. 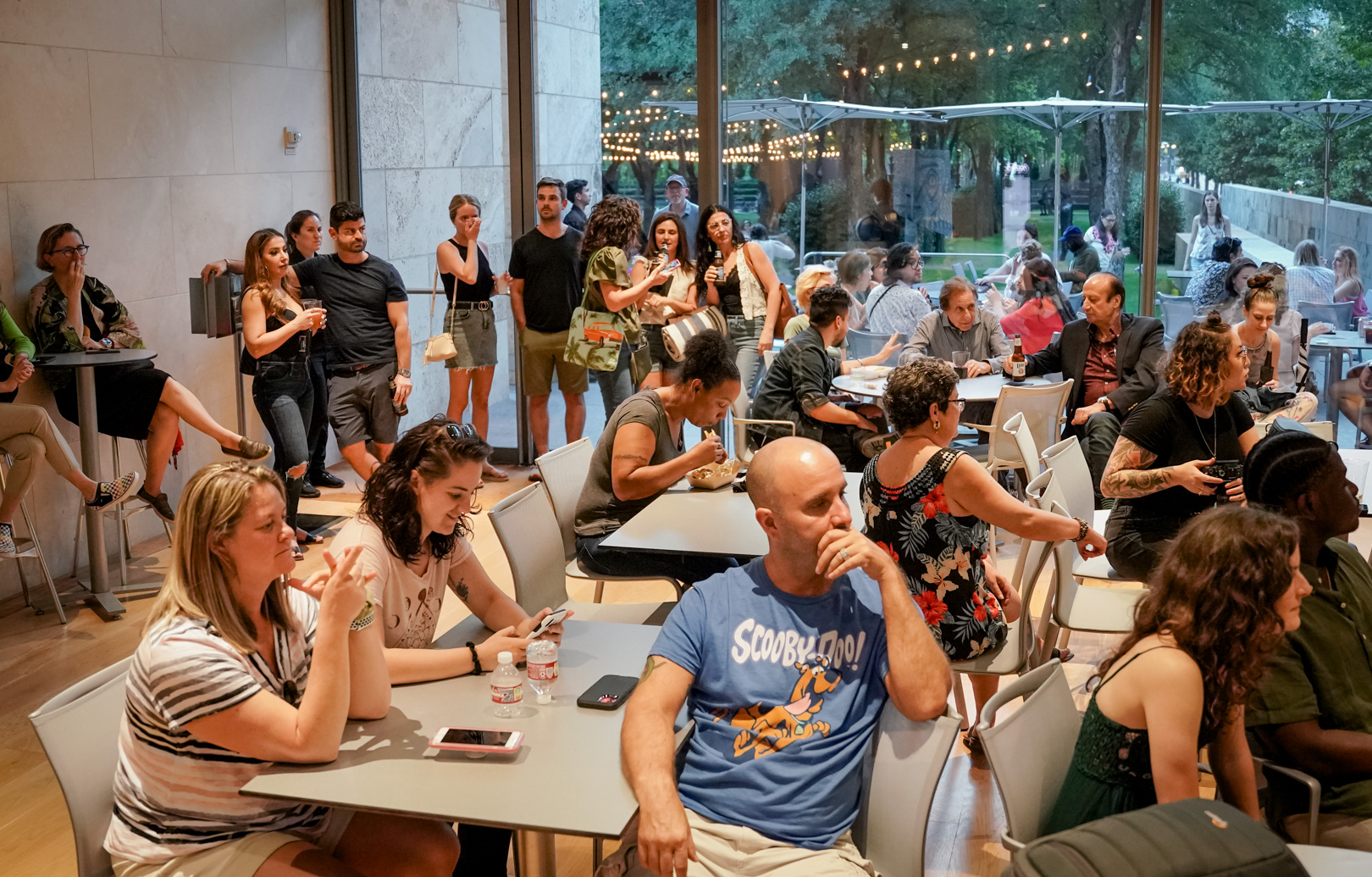 The audience inside the Nasher cafe, where some performances were moved due to inclement weather predictions. Photo: Jessica Waffles 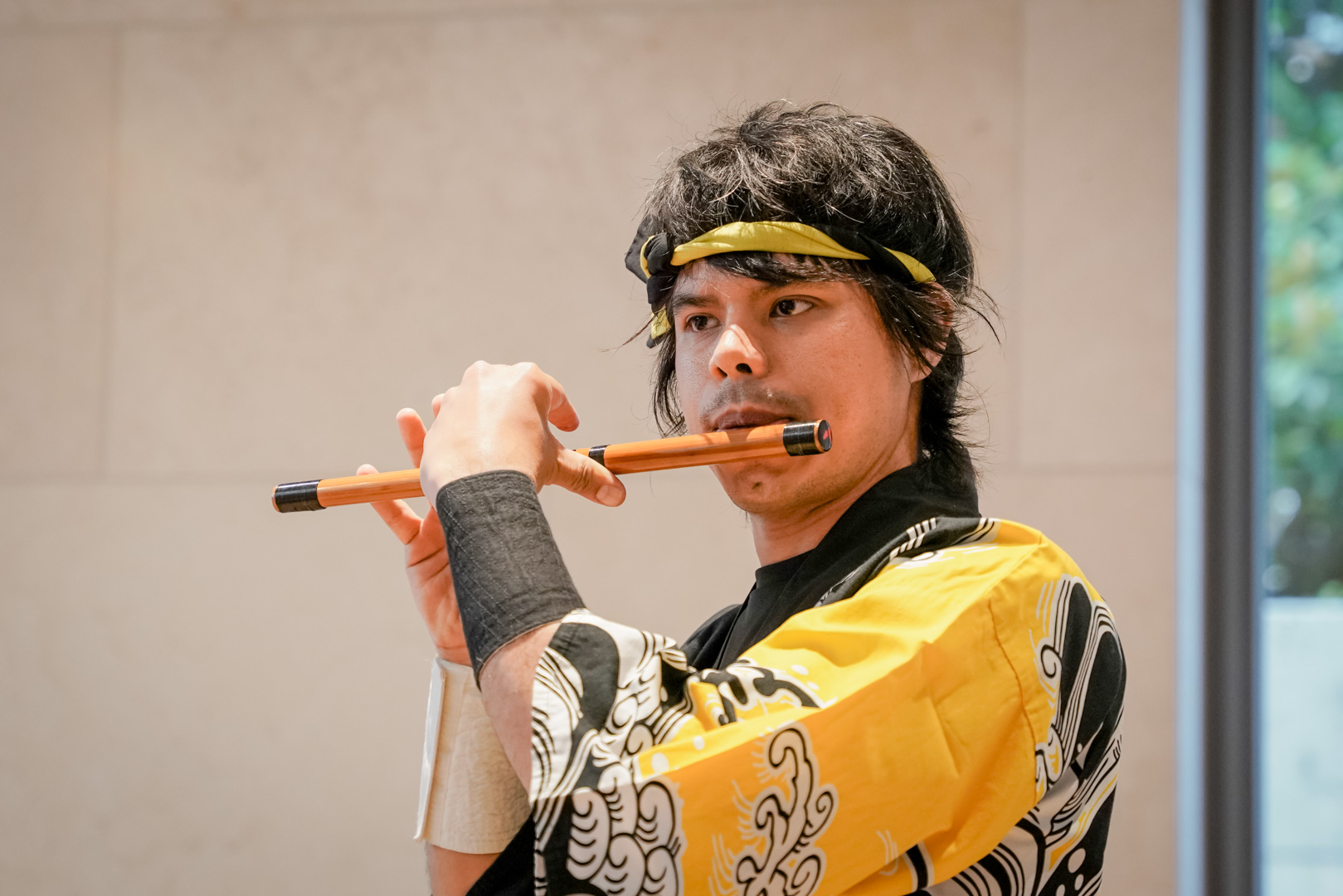 Jay Cantu of Goisagi performing during ’til Midnight at the Nasher. Photo: Jessica Waffles 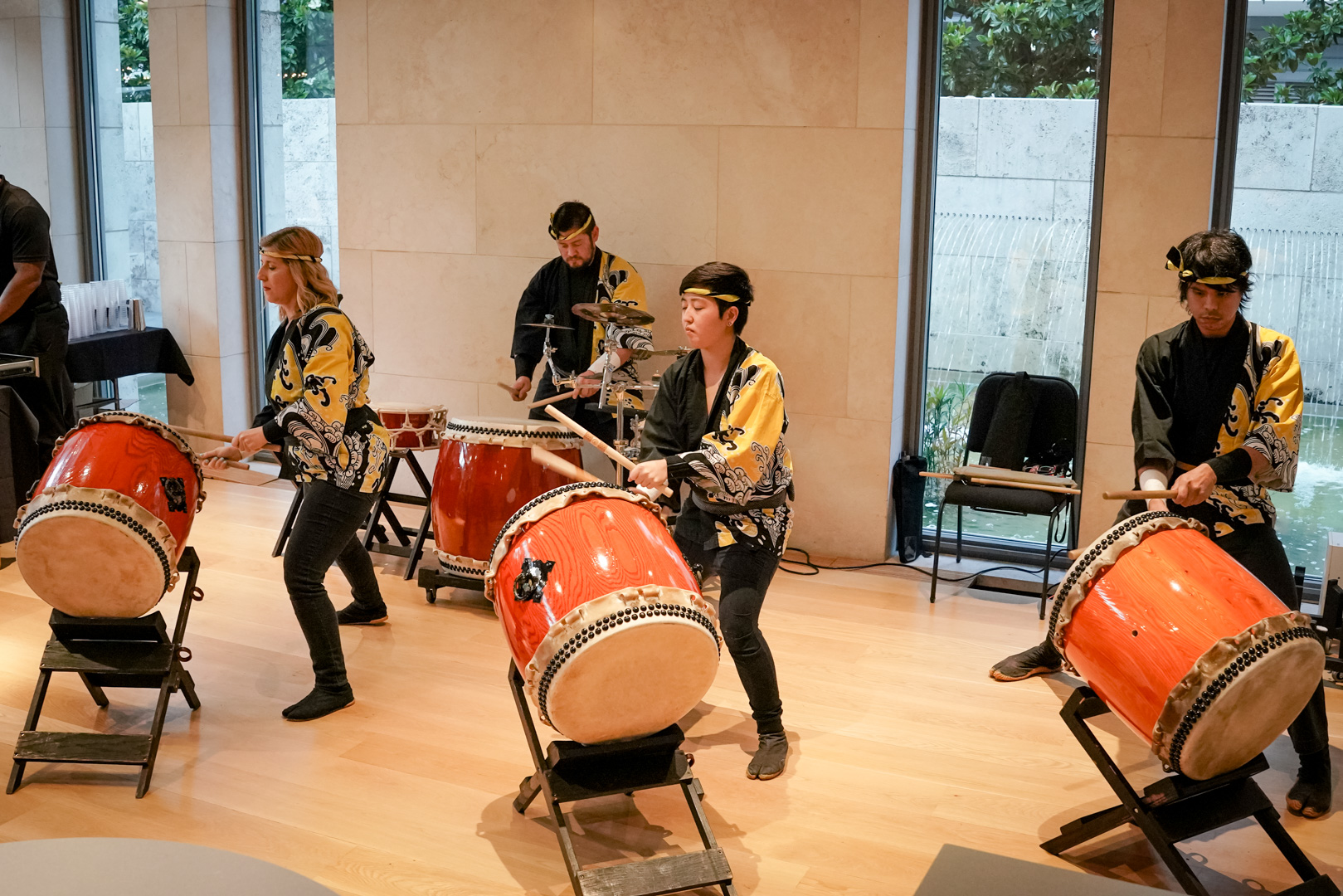 Goisagi performed a thrilling set with heavy drum beats and matching outfits. The group has a current roster of eight performers, though this set had only four because of the smaller space constraints.

Their style of performance is called daiko, or taiko. In Japanese, taiko literally means “drum,” though the term has also come to refer to the art of Japanese drumming. Taiko has been a part of the Japanese culture for centuries, and was used predominantly in the military arena. As it evolved, Japanese Buddhist and Shinto religions gradually began to take it on as a sacred instrument. Historically, it has existed in a multitude of other environments, including agrarian, theater, and the imperial court. 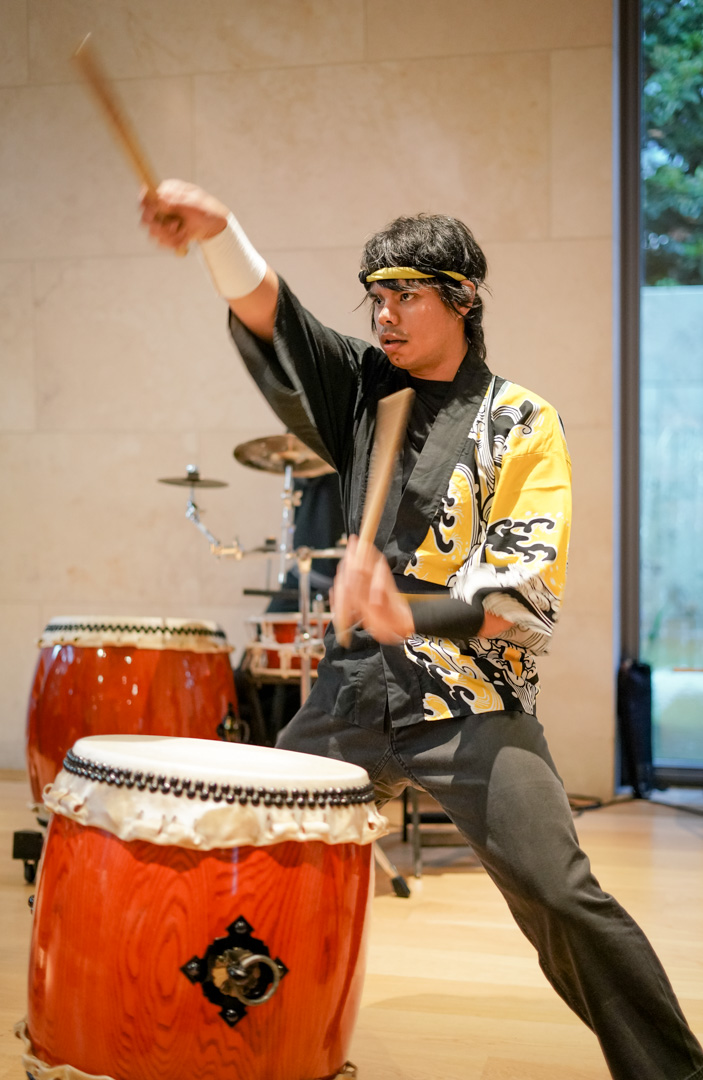 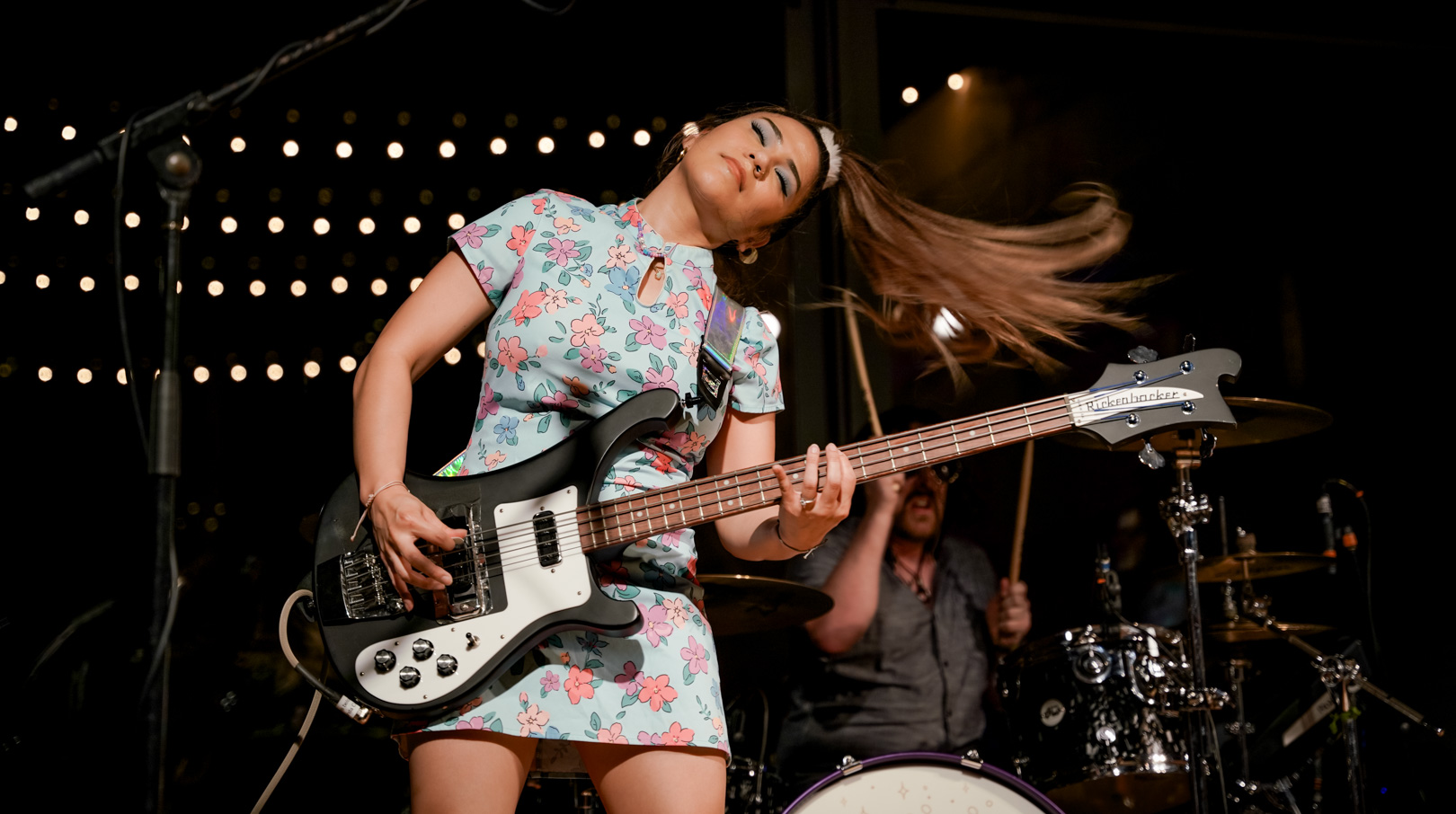 Panda Cuenca from Phantomelo is known for her energetic stage presence, dancing and whipping her hair around during most of the set. Photo: Jessica Waffles 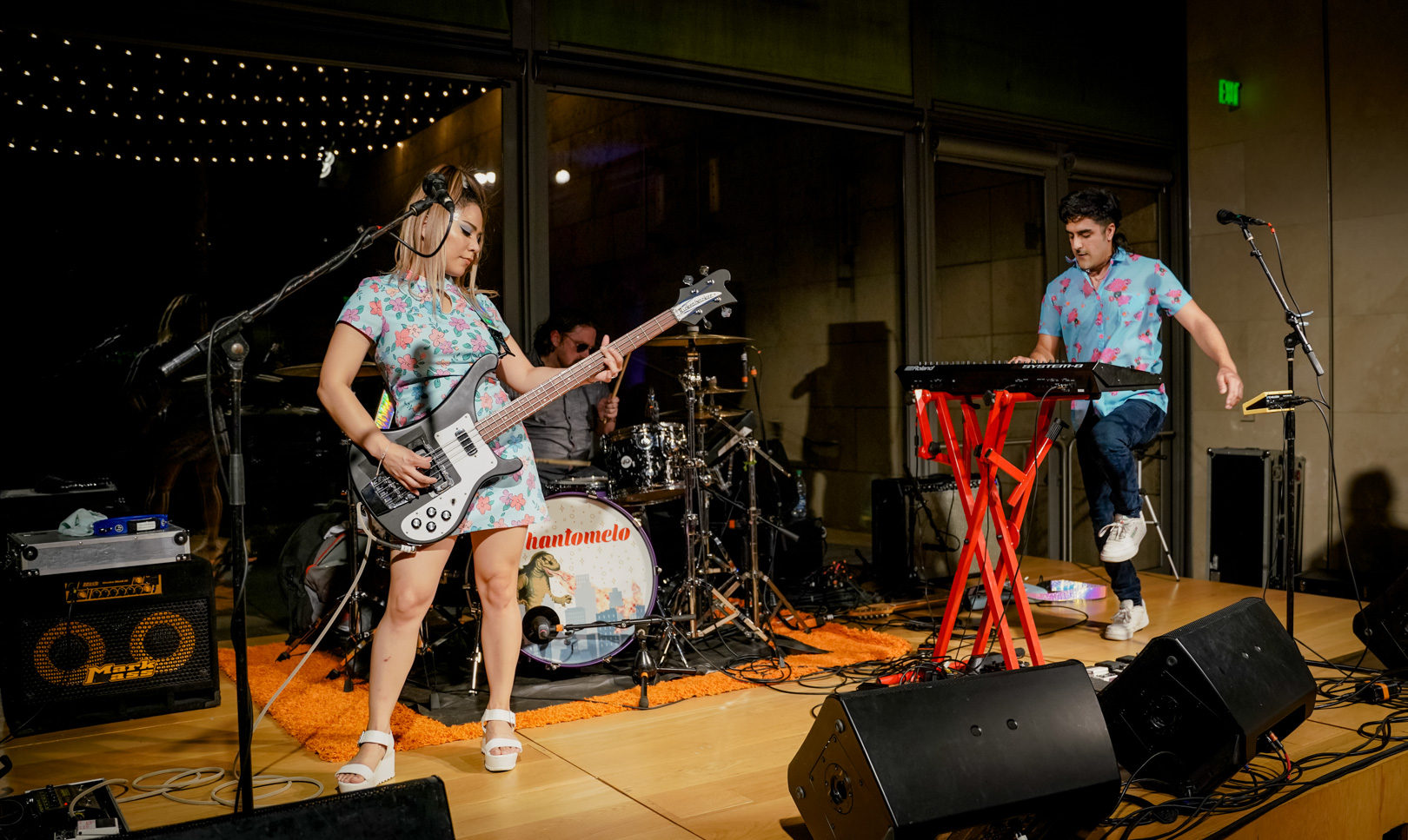 Phantomelo has been on a steady rise in DFW, making a name for themselves as a lively indie band. (left to right) Panda Cuenca, Jeff Gerardi, William Rakkar. Photo: Jessica Waffles

The final musical performance of the night was Phantomelo, a North Texas alt rock trio who have been described as surf rock with psychedelic leanings (according to their bio). Their high-energy performances have staked a name for themselves in the local music community, having played alongside many local favorites such as Royal Sons, Kyoto Lo-Fi, Hen and the Cocks, Meach Pango, and countless others.

Their 2019 EP Pet Your Dog More cleaned up at the Fort Worth Weekly Music Awards, claiming EP of the Year and their single “Gum Love” from the EP won Song of the Year & Video of the Year. The music video for “Gum Love” was produced in collaboration with Coffee Pot Films, who also produced their latest music video for 2021 single “Space Prom.” The video features a serial killer who finds his next victim at a local bar – and the killer’s co-star happens to be a puppet. 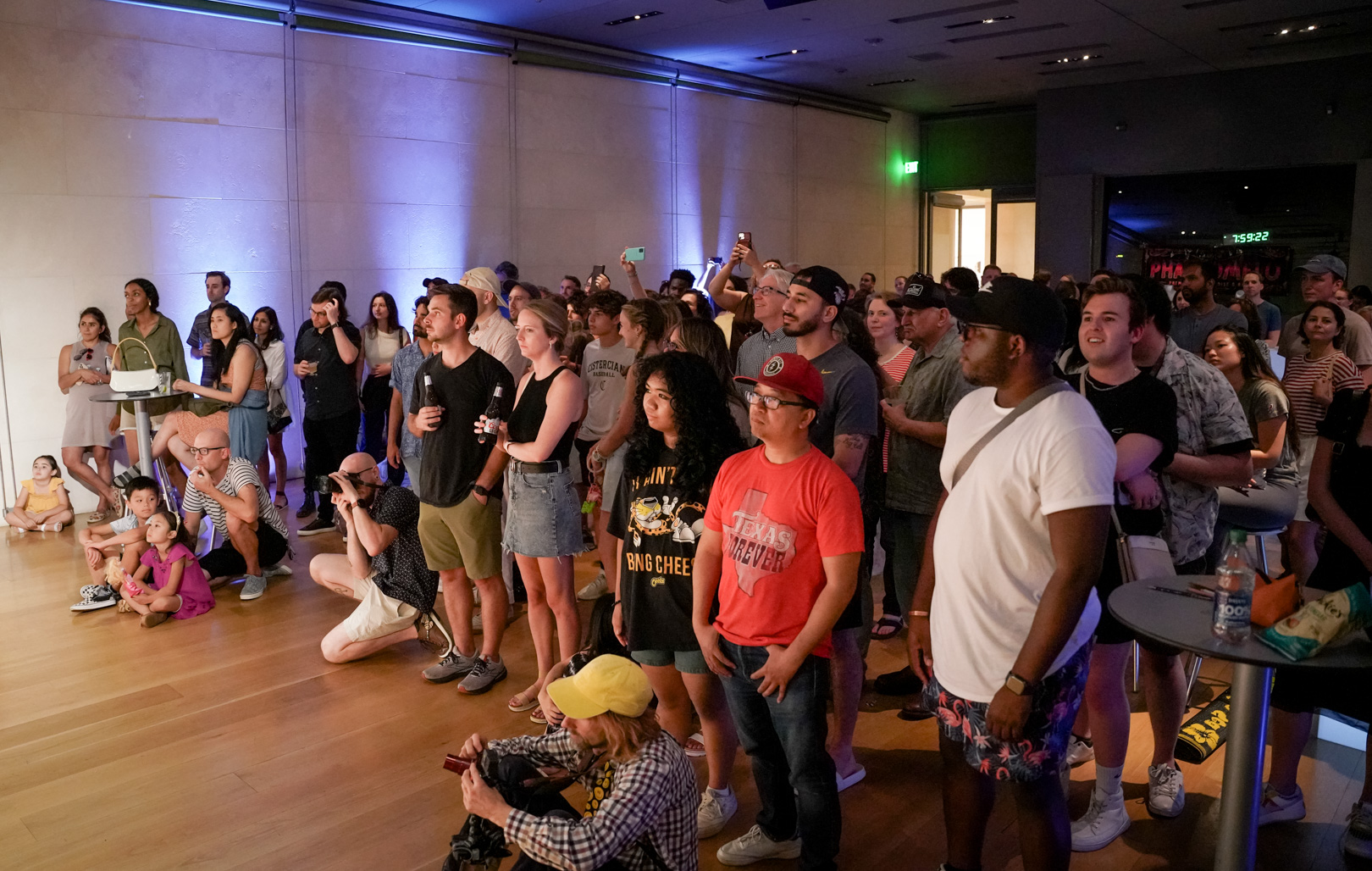 The ’til Midnight at the Nasher main stage was moved inside in the lower level of the building due to inclement weather predictions. Photo: Jessica Waffles 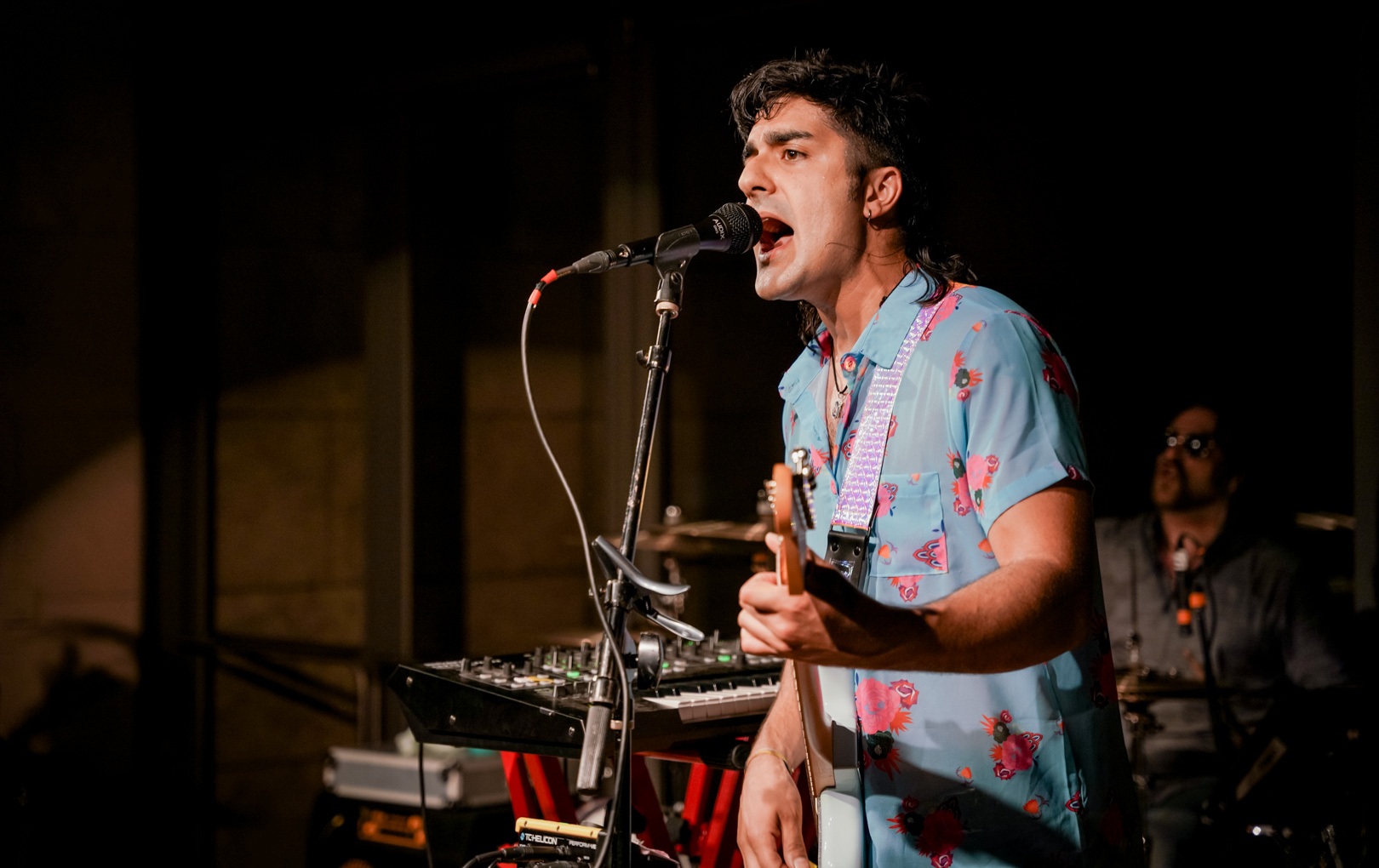 William Rakkar plays both the keys and guitar as the front man of Phantomelo. Photo: Jessica Waffles 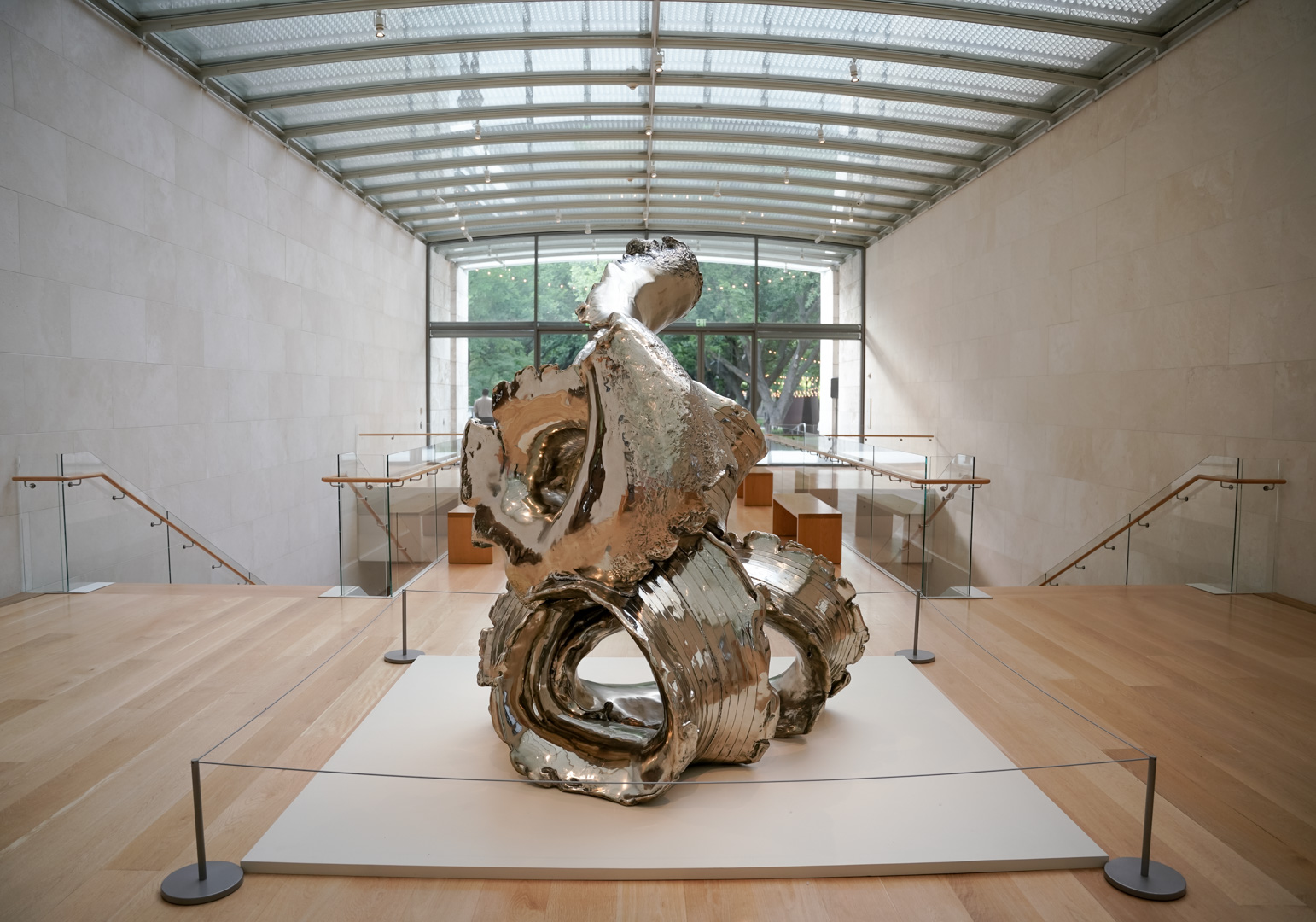 Power Tower by Lynda Benglis (2019) can be found just beyond the greeting desks at The Nasher Sculpture Center. Photo: Jessica Waffles

The Nasher Sculpture Center is currently exhibiting Lynda Benglis and Magali Reus through September, with many other artists featured in the collective galleries.

One such artist is Jeff Gibbons, whose musical sculpture is in constant movement. B.O.B.O. (Boat O.A.R. (Oceanic Auto-Reclaimer)).

As described by the museum, “This piece is composed of a variety of objects oriented abnormally: an air organ is propped on its side atop a chair tipped on its front. A taut string supports a tube extending upward from the side of the air organ and winds its way through the keys, depressing one, which draws an intermittent low note from the organ, suggesting the thrumming of engines and recalling movie scores meant to build drama and suspense.

“The air from the organ keeps a ball spinning at the top of the air tube. The ball has two faces drawn on it, one smiling, one frowning, cycling randomly through a range of emotions. The front of the organ sports a rendering of floating ice factories, illustrating Gibbons’ idea for an intervention to counteract global warming and create more fresh drinking water.”

There is more to learn about the piece in person, which includes a plaque that describes the origin and intension in more depth. 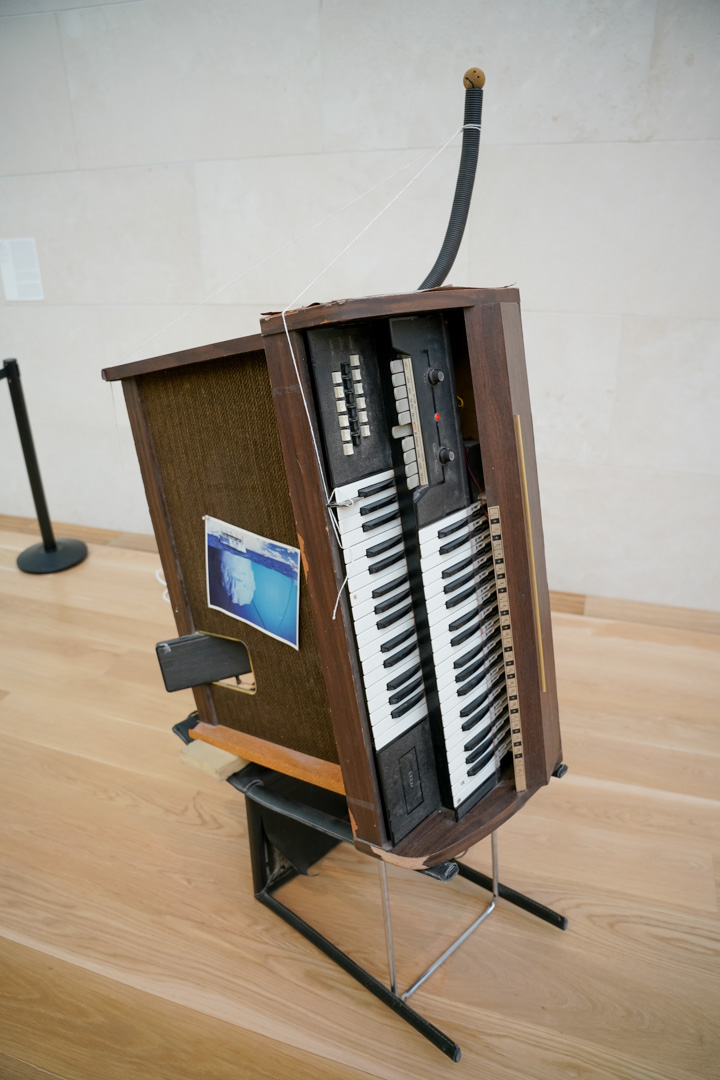 B.O.B.O. by Jeff Gibbons features an air organ propped on its side and emits a low droning noise that is somewhat reminiscent of a fog horn. Photo: Jessica Waffles

The Nasher Sculpture Center will be hosting two more ’til Midnight events on June 17 and July 15.

There will also be upcoming First Free Saturdays, which will include free admission from 11 AM – 5 PM, with family programming 11 AM – 2 PM.  The next event will be Saturday June 4. More events can be found on their online calendar. 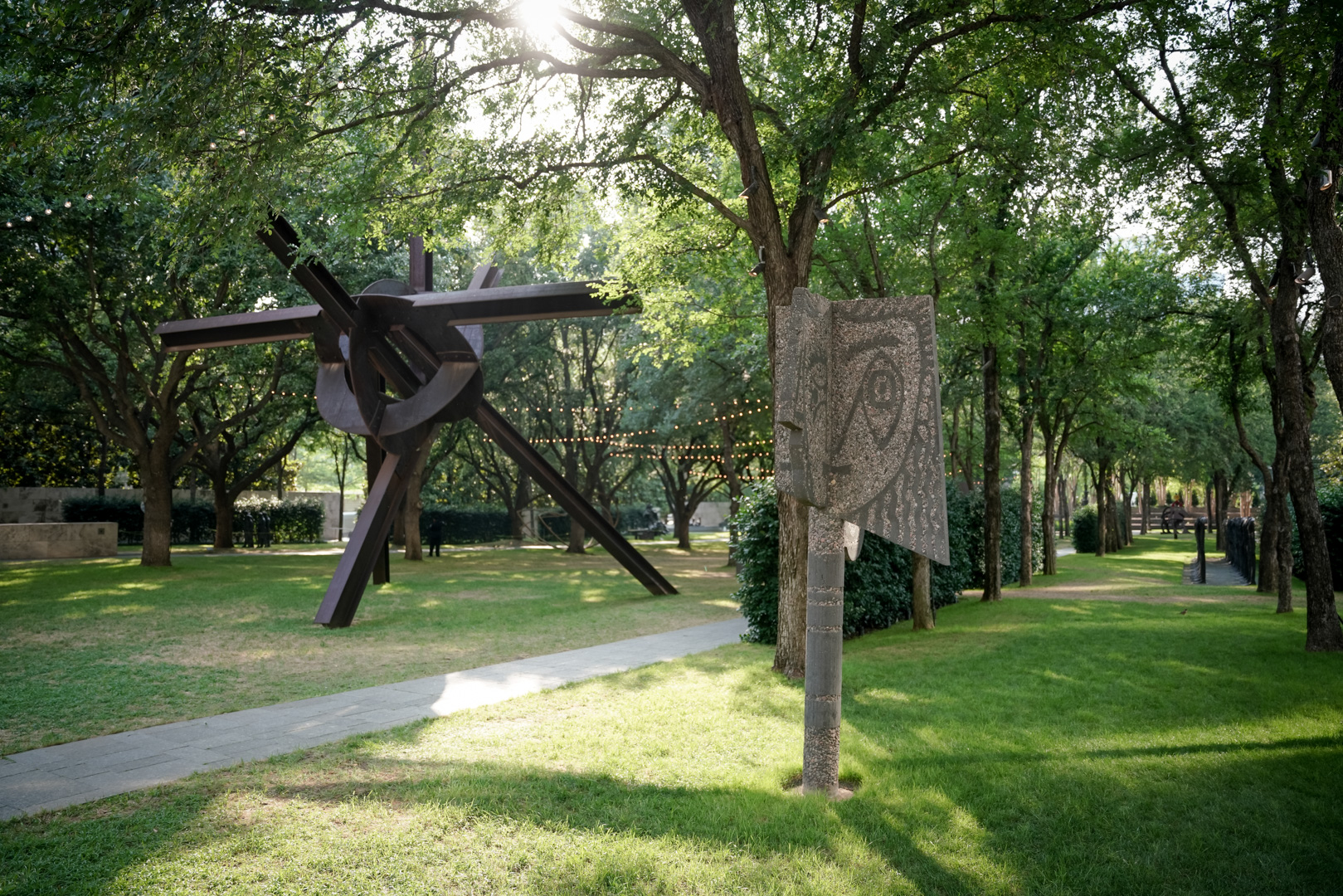