Most museums are built upon the past tense — looking back, reflecting, assessing. So what does it mean to house an archive and display some of its contents for a man who is very much alive, continuing to work and produce new material?

It’s precisely the challenge facing the minds behind the Bob Dylan Center, which opened to the public May 10 in Tulsa, Okla. Located near downtown, just steps from the Woody Guthrie Center (opened in 2013), the Dylan Center is a two-story testament to the value of context, a tribute to the creative process, and a fascinating journey into the ephemera gathered over the course of a prolific, influential and, as mentioned, active life and career.

The 29,000-square-foot space, overseen by the American Song Archives (which also manages Guthrie’s collections), is a free-flowing experience, with no prescribed path through the building.

The first floor is made up of a chronological gallery, which takes visitors through Dylan’s formative days in the New York City folk scene of the 1960s, through his many iterations as one of America’s pre-eminent singer-songwriters and into his acclaimed elder statesman period, inclusive of his Nobel Prize win and other recognitions. Also on the first floor are six individual exhibits, which take specific Dylan tracks — such as “Like a Rolling Stone,” “Jokerman” or “Chimes of Freedom” — and pull them apart, allowing a closer look at the creative process, and how Dylan arrived at his final product.

You can also peer at artifacts like original drafts of song lyrics, the contents of Dylan’s wallet circa 1966, congratulatory telegrams from Willie Nelson or President Bill Clinton and the leather jacket Dylan wore when he famously went “electric” at the Newport Folk Festival in 1965. 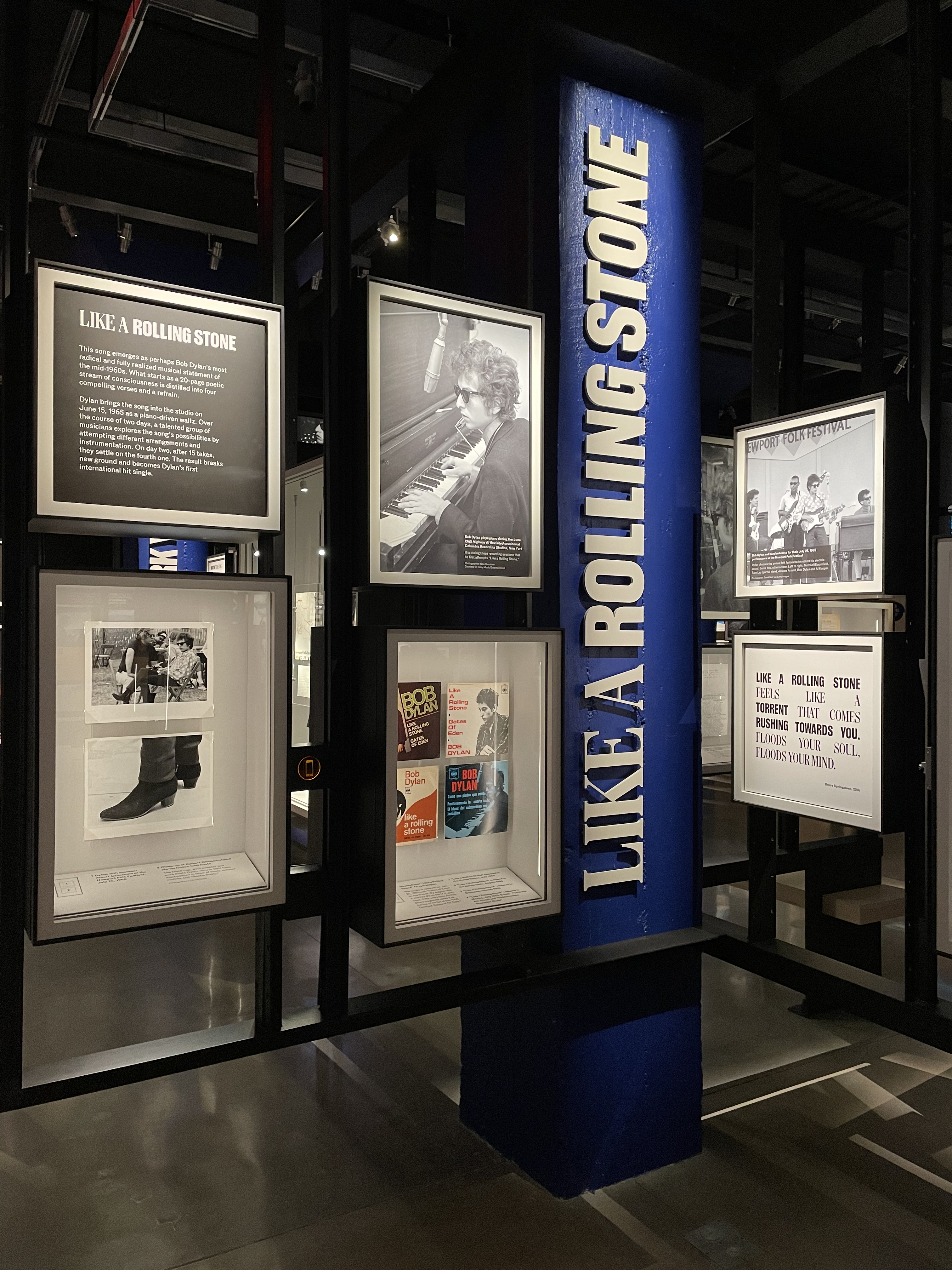 An exhibit on the song “Like a Rolling Stone,” at the Bob Dylan Center in Tulsa, Okla.
Photo: Preston Jones

The second floor is split between a small gallery section (which will feature rotating exhibits), a reading room and a screening room. (Also worth noting: Anyone hoping to have carte blanche with the breadth of Dylan’s archive will be out of luck, unless they’re a credentialed researcher.)

Shadow boxes showcasing some of the more arresting items from his 60-year career — correspondence from Johnny Cash, stage outfits from his 2003 film Masked & Anonymous, Christmas cards from the Beatles — line one wall of the second floor. Throughout both floors, visitors can use what the center calls “audioguides” (they resemble old-school iPhones and have headphones attached) to listen to rare outtakes, interviews with key Dylan collaborators and more. 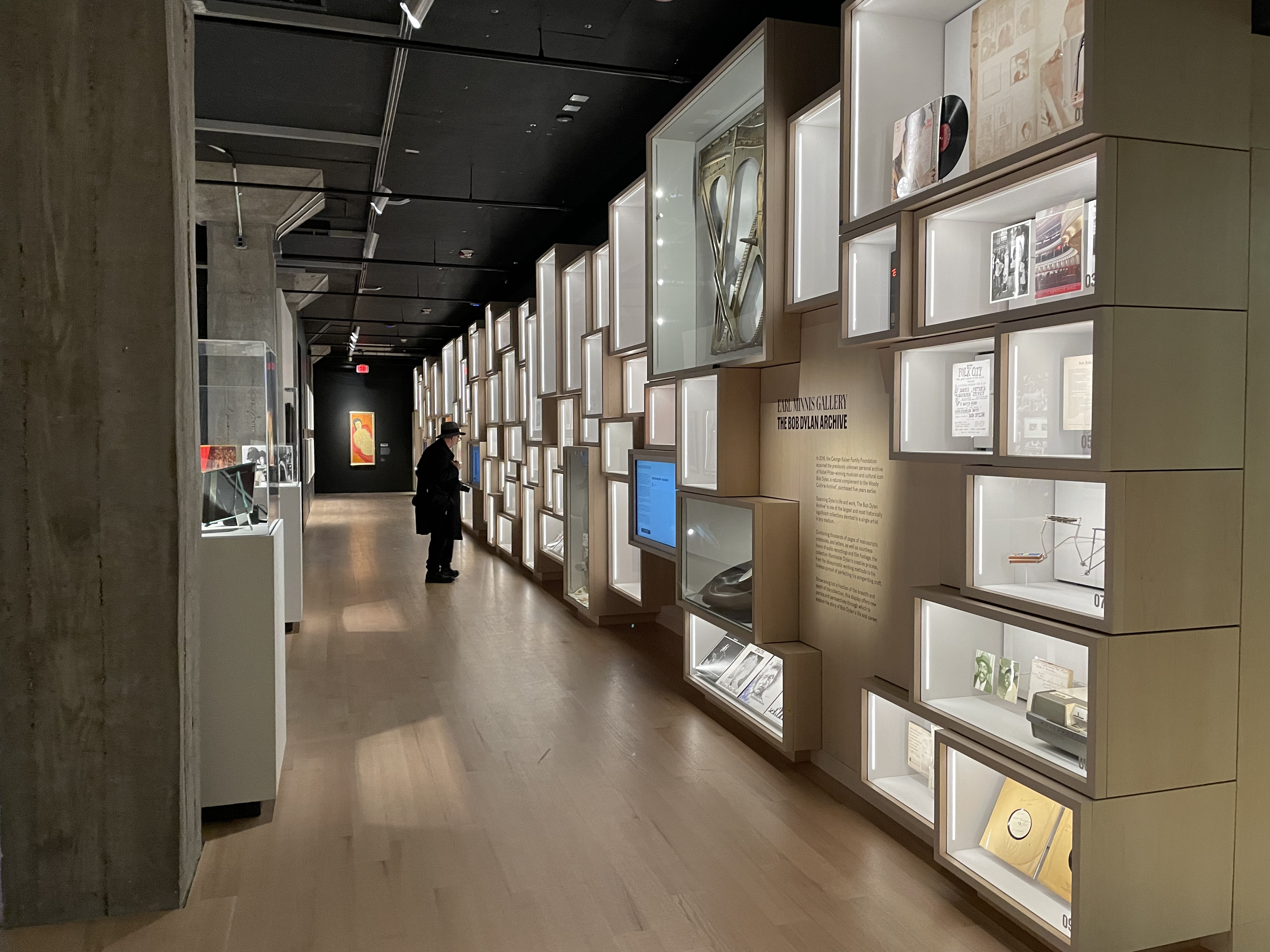 Masterfully curated, thoughtfully presented and promising to be a dynamic experience to match its subject, the Bob Dylan Center is a must-see destination for even the most casual Dylan fan. While the man himself may be on a Never-Ending Tour, his life’s work now, at last, has a resting place, and is well worth a visit.