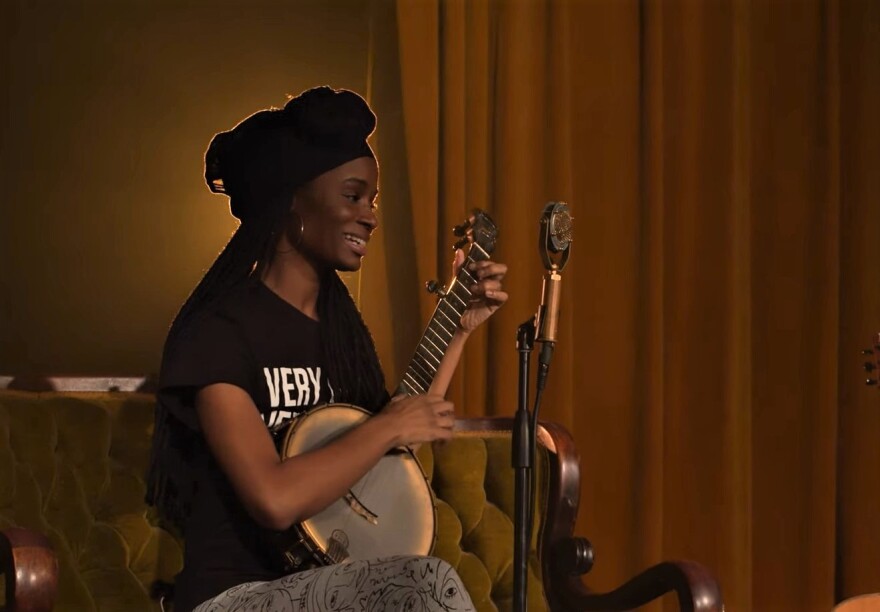 Even for her, it was a discovery — that as a Black woman playing a banjo, this was her music.

“That’s because growing up and being musically trained,” Waller-Pace said, “a lot of what teachers would lump in as folk or Appalachian music, things associated with the banjo, were coded or explicitly called white.”

The banjo began as an African instrument, a stringed gourd. Enslaved Africans taught white Americans how to make banjos, how to play them. And then Irish immigrants in Appalachia picked it up — and from there, we get its association with a white, old-timey, backwoods, hill-country sound..

One major reason these instruments fell out of favor with African Americans, Waller-Pace said, was what followed: the minstrel show. The minstrel show dominated American popular culture in the second half of the 19th century, associating banjos and fiddles with racist caricatures.

The 38-year-old Waller-Pace said, growing up, she’d encountered “traces” of Black folk music. But it was when she taught music in Fort Worth ISD for ten years that things converged. She learned the banjo, researched traditional folk tunes.

And she realized how current music education curricula slight African American influences. So she developed the nonprofit, Decolonizing the Music Room — to promote roots music in schools.

And that led her to establish the Fort Worth African American Roots Music Festival. (It started last year as a virtual event — because of COVID. This year is the first time it’ll be live, onstage).

“I tend to be more of a space creator,” Waller-Pace said. “I tend to want to step outside of systems and push the needle from the outside. And so I thought, you know what? I can create a space — here.”

‘Roots music’ — from folk to early blues, even early acoustic jazz — has often been called “old time.” Which means it wasn’t seen as just ‘white.’ From the first vinyl recordings, the music industry also treated it as a relic. It was already “past.”

“‘Old time’ is a record-label designation that was coined in the 1920s,” Waller-Pace said. “And so you’ll hear ‘old time,’ you’ll hear ‘trad’ for traditional, you’ll hear string band, all of that. But these things are not frozen in time.”

Benjamin Hunter is a multi-instrumentalist from Seattle who’ll play at the Fort Worth festival. He’s aware that some people see this kind of music as out of touch with what’s fresh and popular these days. We listen to dance tracks, he plays the fiddle.

“You trace the lineage, and you can go back as far as you want,” Hunter said. “But this music is always looking forward. We like to call this music ‘traditional,’ but hip-hop is folk music. Dance and techno — that’s folk music. It’s a form of music that served a purpose — for people to gather together – and party.”

Hunter points to the nightclub face-offs that have long been a factor in Black music-making: the jam sessions that pushed jazz forward, the toastings and rap battles that created hip-hop.

Dr. Dena Jennings is a practicing physician in Virginia. She’s also a leading voice for — and maker of — the gourd banjo. She started the Affrolachian On-Time Music Gathering to spread the word.

For Dr. Jennings, gathering together, sharing tips and techniques is how these Black roots evolve and spread. And the Fort Worth festival is part of a string of such events — it’ll even include Junious Brickhouse, a dancer-choreographer known for his fusion of hip-hop and traditional buck dancing.

Brandi Waller-Pace said this “is what is particularly strong for me in this music — being able, you know, to sit around in a circle and make music. It just feels really, really joyful to be able to have something like this as part of Black music.”

Waller-Pace herself attended one of the first such festivals: the Black Banjo Gathering in North Carolina in 2005.

Three other musicians who attended that became the Carolina Chocolate Drops. They’re probably the best known of what might be called ‘new contemporary roots’ bands. The Chocolate Drops won a Grammy Award and contributed to the hit soundtrack of The Hunger Games, with the song “Daughter’s Lament.”

The Fort Worth African American Roots Music Festival starts at noon, Saturday, March 19, at the Southside Preservation Hall,1519 Lipscomb Street, in Fort Worth.

Jerome Weeks is Senior Arts Reporter/Producer for KXT’s sister station, KERA. Email him at [email protected] or follow him on Twitter @dazeandweex.