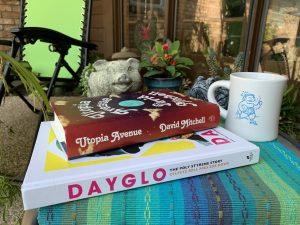 Full disclosure: Back in April, having just finished back-to-back two books that took place in Beirut during the Lebanese civil war, I had a mini meltdown. It was the night Elon Musk’s SpaceX launched those Starlink satellites, and the sonic booms and subsequent, otherworldly show of lights up above had my heart racing and got me thinking we needed to load up the car and leave town, steeling ourselves for endless traffic jams and checkpoints, and hoping like crazy for no flare-ups along the way.

But as they say, “there’s medication for that.”

Clearly, it was time for some lighter reading material, so finding solace again in some new fiction and music memoirs was just the thing. If you, like me, need frequent respites from reality or a deep dive inside the minds of your favorite musos, here are a few items you might want to add to your reading list. 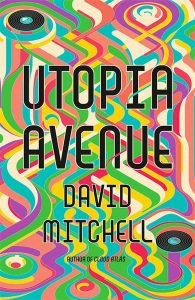 High fives to David Mitchell’s Utopia Avenue for charging to the rescue, just when I needed it the most.

Like me, if you were unfamiliar with Mitchell’s other works like Cloud Atlas and The Bone Clocks, Utopia Avenue might be a comfy place to start. Even at 571 pages, I did not want it to end. This impeccably layered chronicle of a fictional band from their formative years into a highly influential and revered powerhouse features a lovable cast of players, and a veritable who’s who of “gee, I wonder who that’s based on?”

Brought together by a Brian Epstein-ish rock ‘n’ roll catalyst named Levon Frankland, Utopia Avenue unites Elf, Dean, Jasper, and Peter, whose varying social spheres and upbringings couldn’t be more disparate. But their blend of musical wizardry and oft-volatile chemistry paves the way for magic to happen, on stage and in the studio.

Plus, the smorgasbord of cameos – from Sandy Denny, Jerry Garcia, David Bowie, Mama Cass, Syd Barrett, Janis Joplin, Francis Bacon, and a stoned Queen Juliana of the Netherlands – are guaranteed to make you chuckle. 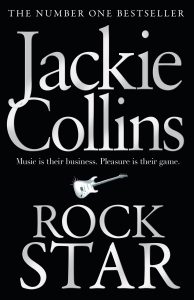 For both grins and a quickie poolside or beach read, especially with its eerily similar storylines and players, and in honor of the late bestselling novelist Jackie Collins and the 2021 Tribeca Film Festival’s Spotlight documentary pick, Lady Boss: The Jackie Collins Story, you should consider her 1998 tome Rock Star a worthy follow-up to Utopia Avenue. 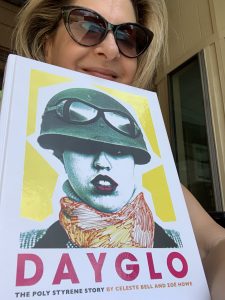 Dayglo is an unsparing but love-filled letter of reflection, respect, and forgiveness to Celeste Belle’s late mother, Poly Styrene, the songwriter and frontwoman for the futuristic and pioneering English punk band X-Ray Spex.

A lyricist who cast her critical eye on misogyny and crass consumer culture with a humor that her angrier friends and musical cohorts at the time sadly lacked, Poly Styrene’s career was cut short due to the debilitating mental illness that wreaked havoc not only on her relationships with her family, bandmates, and friends, but on her own unbridled creativity.

Being a woman and an artist of color while navigating the murky world of the music biz added to the weight of her illness, back when schizophrenia was the diagnosis for what’s now understood to be bipolar disorder.

Also not helpful was the knowledge that the press, managers, fans, and even some of her own compatriots didn’t always have her best interests at heart, and that the people she did trust were helpless to act as her illness robbed her of shine, and them of their friend.

In both Dayglo and the heartbreakingly lovely documentary, Poly Styrene: I Am A Cliché, when DJ, producer and newly minted memoirist Don Letts offers up his account of the night Poly locked herself in Johnny Rotten’s bathroom and proceeded to shave her head (well before Britney Spears), it’s hard not to feel angry for her.

But his acknowledgement of youthful indifference also serves as a heartfelt apology. 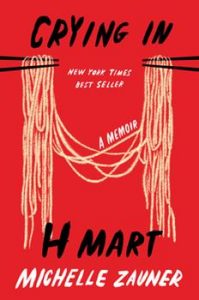 Speaking of heartfelt, Crying In H Mart delivers it in torrents, balancing the raw, exposed emotion with eloquence and humor. Like Dayglo, it’s also centered on the oft uneasy and awkward flip-side of the mother-daughter coin.

Born in Seoul to a Korean mom and American dad, and raised in Oregon, Japanese Breakfast lead singer and songwriter Michelle Zauner’s own relationship with her mother Chongmi could also be affectionate and testy in equal measure, spelled out in the pages of what’ll surely be at the top of several best books of the year lists.

There are the laugh out loud moments – recollections of her summer trips to Korea and the vivid personalities of her grandmothers, aunts, and cousins, not to mention her own sassy and rebellious teenage years.

But riding along are the visceral and psychic screen grabs of Zauner’s grief through the various stages of her mother’s illness and death: the child’s denial, the caregiver’s double-barreled prayers, and the eventual and long-enduring sting of losing her mother, compounded by the signs of her mother’s essence still inhabiting her world in her fresh absence.

Zauner honors that connection and holds it close, accustoming herself to the loss while not letting it slip from her conscience. And of course, throughout Crying In H Mart, there’s the celebration of the various Korean dishes, brought to life in loving, almost pornographic detail.

My own mother’s family is Lebanese, so all the waxing rhapsodic on the cuisine scored major points for me, way before I even read the book. 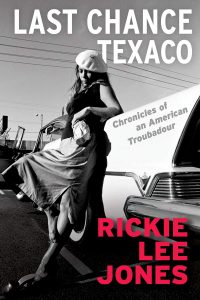 In another kooky twist of fate, as mentioned in Dayglo, it turns out that Poly Styrene was a fan of Rickie Lee Jones. Plus, there’s the recent passing of Chuck E. Weiss, the real-life inspiration behind Jones’s mega-selling hit “Chuck E’s In Love.”

So, if you haven’t read Jones’s Last Chance Texaco: Chronicles Of An American Troubadour, prepare yourself for a beautifully-written, if at times disjointed ride.

Descended from Vaudevillians, raised by wolves, and always with her eyes on the prize, Jones’ Beat-flavored recollections of her rough-shod childhood and early sense of destiny are riveting, and as a woman who never let anything stand in her way of her vision, she’s the kind of shero we should take the opportunity to celebrate at every turn.