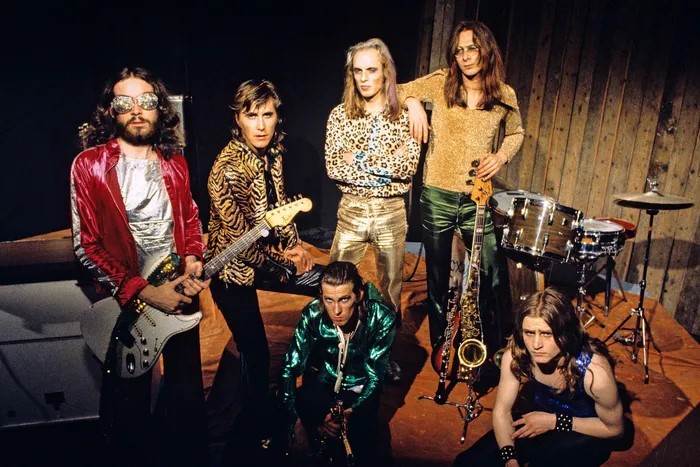 Have you ever heard a new song and it made you think of a band from the past? Sometimes what’s old is new as artists take inspiration from their favorite songs and present older sounds in a new way. St. Vincent just released her new album Daddy’s Home, which was heavily inspired by music she listened to growing up. Several artists and sounds of the past came to mind, however the album really hearkened back to one specific artist for me.

Roxy Music is one of the best UK bands that never truly broke out in the US. Started by Bryan Ferry in 1970, their lineup shifted multiple times, including some with a young Brian Eno, before their first single “Virginia Plain” reached #4 on the UK charts in 1972. They released eight albums between 1972 and 1982, where in the UK they had three #1 albums and nine songs that reached the Top 10. A few songs have stood the test of time here in the US, but Roxy Music never had a US Top 10 anything – Manifesto was the highest charting album at 23 and “Love Is The Drug” was the highest charting song at 30. Their music was later featured in popular culture – “Love Is The Drug” was used in the Martin Scorsese film Casino and “More Than This” was in Knives Out and sung by Bill Murray’s character during a karaoke scene in Lost In Translation.

Today’s Best Song You’ve Never Heard is “Mother Of Pearl” from one of Roxy Music’s earlier albums, Stranded, released in 1973. It sounds like it could fit right into St. Vincent’s new album with a totally unique structure and great use of discord combined with terrific harmonies. It kicks off with a rocking guitar lick before settling into a looping guitar and piano melody. The complexity of the song continues to build with more instrumentation along with Bryan Ferry’s trademark vocals. Most Roxy Music fans will know “Mother Of Pearl”, along with How I Met Your Mother fans, however it deserves to join other songs in their catalog that have gained popularity over the years.