November blues got you down? We’ve got just the cure.

Here’s the full scoop on happenings in the North Texas live music scene this November:

Memphis country-punk rock ensemble Lucero has been making music together for a long time — this year marking their 20th anniversary as a band. The band’s ninth studio album, Among the Ghosts, features Lucero’s distinctive sound with songs about family as well as their Southern heritage. Touring their new album, the Memphis boys of alt-country will be coming through Dallas for this free show with RSVP!

Perhaps by now, The Record Company’s story is a well-known one: a trio of musicians grit it out on their own for years in bars and clubs, join forces in LA, set up some microphones in a living room and cut an album that turned their world upside down. Released in 2016, Give It Back To You spawned three Top-Ten hits at Triple-A radio stations across the country, earned the band a slew of festival appearances and sold-out headline dates around the world and even garnered a GRAMMY nomination. Catch them at this historic Dallas venue, with openers Madisen Ward and the Mama Bear!

And check out our interview with the band here.

Dawes’s specialty — smooth, California folk-rock — is especially evident on their latest studio album, Passwords. The band’s lineup includes Taylor Goldsmith, along with his brother Griffin on drums, Wylie Gelber on bass and Lee Pardini on keys. Join these beloved folk rockers for an exciting night of two full sets at this Deep Ellum venue.

Formed in 2013, prior to graduating from performing arts high school in Minnesota, Hippo Campus started on a break-out trajectory that followed a series of talked-about performances at SXSW.  They’ve since risen to the forefront of their genre on the backs of relentless touring and the strength of their debut album, Landmark. They’ll perform in downtown Dallas with special guests The Districts.

Raised in Alabama and based in Brooklyn, Phosphorescent is the working moniker of singer-songwriter Matthew Houck. Thing along the likes of M. Ward, Deer Tick, Sun Kil Moon or Father John Misty. Enjoy this stellar show at Lower Greenville’s Granada Theater, along with support from Liz Cooper & the Stampede.

The breakout success of the 2016 album Puberty 2 hailed Mitski Miyawaki’s as the new vanguard of indie rock. Her emotionally raw and carefully crafted songs experiment with narrative and fiction, but ultimately aim to empower other women. While this event is sold out, those lucky few who snagged their tickets early are in for a treat!

This Midwestern gal grew up speaking her mind and writing songs from an early age. Lissie’s latest album My Wild West offers a portrait of an artist who has always been on the move, now finally creating a sense of permanency. The album has since peaked at #1 on the Billboard Heatseekers chart and Top 10 on the Independent Album chart. Grab your tickets for this can’t miss show!

Join KXT and The Rustic as they celebrate the venue’s fifth birthday with Margo Price & Lukas Nelson! This will be an all-ages event, with General Admission, VIP and special B-Day Passes available for purchase. Be sure to stop by Spinster Records‘ Margo & Lukas Inspired Pop-Up Shop at the show as well! 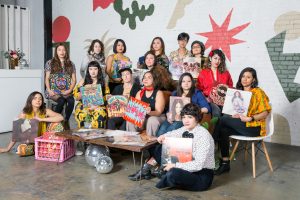 ’til Midnight at the Nasher: Chulita Vinyl Club

Hosted in the Nasher Sculpture Gardens in the heart of downtown Dallas, November’s ’til Midnight features Chulita Vinyl Club — an all-girl, all-vinyl club for self-identifying women of color, providing a space for empowerment and togetherness. Through their performances nationwide, they have established a movement deliberately choosing to only play vinyl with the goal of activating a musical archive that might not otherwise be shared in the age of digital DJs. This event is free to the public and begins at 6pm, running until midnight.

As one of the most acclaimed singer-songwriters to emerge from the 1990s indie rock scene, Cat Power’s Charlyn “Chan” Marshall is unafraid to reveal her inner self in her music, and follows her muse in a variety of different musical directions. Her latest album, Wanderer, draws on the singer’s state of consciousness and her idea that as humans, we’re all wandering for our life purpose. Join us in welcoming the lovely Cat Power to this historic Dallas venue!