From growing up in the Democratic Republic of Congo to being named Plano’s own “Hometown Hero,” singer-songwriter Ron Bultongez has claimed his place as one North Texas’ most quickly rising musicians. 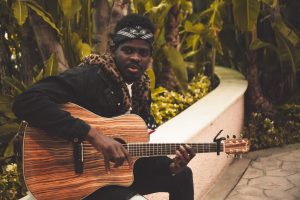 Music was not something Ron Bultongez ever dreamed of pursuing as a career. But after being featured on MTV for his activism and love for those in need, appearing on ABC’s American Idol and NBC’s The Voice, Ron’s recognition and musical accolades only continue to soar. We spoke with Ron in honor of Local Music Month here at KXT, and asked him to reflect on what he loves about the North Texas music scene:

Q: Thinking about the local music scene here in North Texas as you’ve experienced it, what has been one of your favorite memories?

One of my favorite memories would definitely have to be when I put together a benefit show to help the survivors of Hurricane Harvey last year. So many talented performers from the area gathered to share their time and talents in an effort to fundraise. The local artists here have big hearts. The smiles and tears of the family we helped during this time made all of the work so worth it. It was such a special moment. And that’s exactly what music is about; bringing people together, sharing stories, singing songs, and helping one another. Also, the fact that MTV interviewed me and helped share what I was doing was the icing on the cake.

Do you have a favorite local show that you’ve attended? What stands out to you from that show, and why?

The Wild Frontiers. Easily. They are one heck of a live show. It was a party from start to fining. While I am a little biased since I know the guys on a personal level, the moment that Trent starts singing, James and Travis start strumming, Kasey starts hitting the bass, and Josh gets those drum sticks going, I am no longer a friend or brother — but purely a fan. They put on a very energetic show, and for 45 minutes can forget all your worries and just have a blast. I love those guys.

Who are some North Texas artists that you admire?

The Wild Frontiers are by far my favorite band. They’re really a lot of fun. Leon Bridges has got this neat “the whole package” thing going on. Many of us can and do appreciate what he’s doing. Aronn Mendoza is such an amazing talent and tremendous song writer. Remy Reilly is a bundle of talent in such a young soul. With a solid message. I love her, too. The list could just go on and on.

What is one local album that you think everyone should check out?

The Wild Frontier’s released a project called 17, and I highly recommend it. It combines classic rock influence with this new era, alternative rock sound. It’s beautiful. We both share the same producer at Warner Bros Studios named Zac Maloy, and I am so glad he helped these guys bring this music to life. Two of the guys in that band are my foster brothers — James and Kasey Wilson. We kinda just grew up together, and they definitely have a huge influence on my being in music today.

Are you working on anything new at the moment that we can look forward to?

I am currently highly considering a music video for my single, “Learning To Love,” off of my EP, Learning To Love. I am also working on dropping a new single that is very close to my heart about some of the life changing things that have happened to me lately. The next year, my team and I are thinking about a U.S. national tour debut. I can’t wait to meet everyone when we get on the road!