Here’s the rundown on who you won’t want to miss this September in our neck of the woods:

This progressive bluegrass quintet hailing from Brooklyn, New York features mandolinist Chris Thile, guitarist Chris Eldridge, bassist Paul Kowert, banjoist Noam Pikelny and violinist Gabe Witcher. The Punch Brothers’ unique sound has heavy blues and southern bluegrass influence – particularly evident in the group’s beautiful vocal harmonization and musical complexity. Unique in its lyrical focus that attempts to make sense of the world around them in the digital era, The Punch Brothers offer a fresh spin on the age-old genre, bringing in a whole new generation of bluegrass fans. For a band whose individual successes and combined musical talents are not small in number, their live performance is sure to be something acoustic fans across genres won’t want to miss! 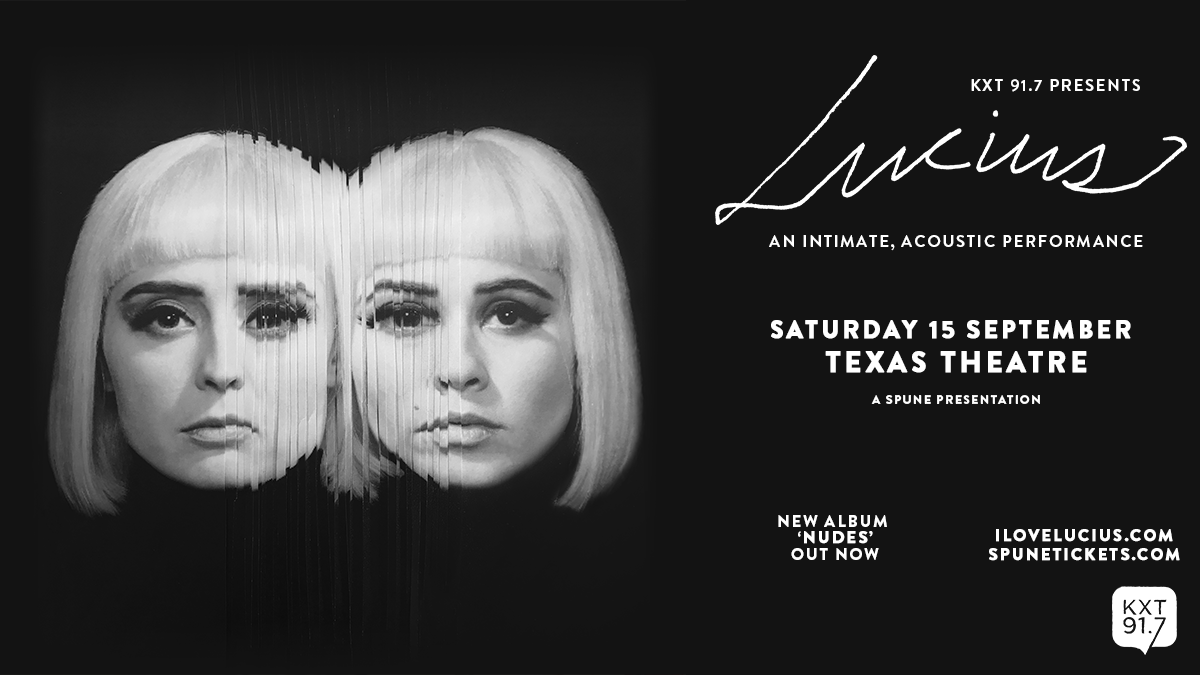 KXT 91.7 Presents Lucius, fronted by the enchanting Jess Wolfe and Holly Laessig in an intimate, acoustic performance on Saturday, September 15, 2018 at Texas Theatre in Dallas. Sadly this one is sold out, but for the lucky few who snagged a ticket, you are in for a mesmerizing performance.

One of the most intriguing, eclectic indie groups to emerge in the last year, octo-pop group Superorganism presented their highly anticipated debut album in 2018 – self-produced, written and recorded in east London. Fronted by Japanese vocalist Orono with a sprawling line up of international musicians, their quirky, pop-art performances have been few in number as the U.S. leg of their international tour kicks off this month. Be sure to catch them in their first-ever Dallas appearance, this month in Deep Ellum.

Breakout-artist Jade Bird has received numerous awards, recognition, and invitations since her chart-topping single “Lottery” in 2018 – having performed on The Late Show with Stephen Colbert, The Tonight Show Starring Jimmy Fallon and at SXSW in March. We loved having her join us for KXT Sun Sets this past summer, and we can’t wait to see her return to North Texas this fall!

Swedish sisters Klara and Johanna Söderberg have been writing and performing songs since they were 12 and 13 years old. The duo’s U.S. popularity began to rise after their cover of Fleet Foxes’ “Tiger Mountain Peasant Song” went viral on YouTube back in 2008. Influenced by country, folk and rock acts ranging from The Carter Family to Bob Dylan to Bright Eyes, First Aid Kit’s acoustic-driven music is distinguished by the Söderbergs’ accomplished melodies, enchanting vocal harmonies, and the sophisticated relativity of their lyrics. The group heads back on tour with stops in Houston, Austin and South Dallas following the release of their long-awaited fourth full-length album, Ruins.

Veterans of rock Yo La Tengo are no stranger to the spotlight. Largely viewed as the quintessential music critics’ band, their 15th studio album There Is A Riot Going On has exactly everything you’d expect from the beloved group – feedback-driven noise rock, dreamy ambient melodies and affecting lyrics. And with old favorites like “Autumn Sweater“, it only feels appropriate YLT is one of this fall’s must-see concerts.

’til Midnight at the Nasher: Negative Gemini

Friday, September 21
Nasher Sculpture Center
Free!
‘Til Midnight At The Nasher presents live outdoor concerts in the Nasher Sculpture Center garden on the third Friday of each month. This month’s musical talent performers include Negative Gimini, whose 2017 single ‘You Weren’t There Anymore” topped the charts of music blog aggregator HypeMachine, and was praised by Pitchfork and Spin last fall.  The Oak Cliff-based band Luna Luna will open this show, this being their ’til Midnight at The Nasher debut!

The Philadelphia-born former schoolteacher Amos Lee has toured and collaborated with countless legendary artists including Bob Dylan, Paul Simon, Norah Jones, Lucinda Williams, Alison Krauss, Calexico and Zac Brown Band — to name a few. The folk-soul musician, whose career took off after topping charts in 2011 with Mission Bell, will play songs from his latest album My New Moo at this beautiful downtown Dallas venue.

I’ll Be Your Girl is the group’s eighth album in its 17 year history, whose resume not only includes dozens of hits since their inception back in 2002, but a 17-part rock opera to boot. Despite the group’s tenure, their latest tracks prove The Decemberists are just as vibrant and relevant as ever. Be sure to snag tickets to this sure-to-sell-out show!

This year marks the 25th anniversary of Liz Phair’s landmark album Exile in Guyville. Since then, she’s released five studio albums, has also composed music for television shows, receiving numerous awards for that work, and will soon add to her list becoming a published author.

American indie outfit Lord Huron emerged in the early 2010s on the heels of the indie folk boom, blending folk, rock, pop and threads of Americana into their dynamic sound. Their label major-debut album Vide Noir, released in April, follows the band’s worldwide recognition and popularity received after recording of their standout track The Night We Met.

After coming up with multi-platinum-selling, Grammy-winning group the Fugees, Hill’s 1998 solo debut The Miseducation of Lauryn Hill established the New Jersey-native singer, songwriter, rapper and producer as an eclectic, creative and empowering force in the music scene all on her own. She is easily considered a modern-day legend of hip-hop and R&B, whose concerts also tend to be somewhat unexpected. Don’t miss out on what is sure to be one of the best shows to date at Irving’s newest music venue!