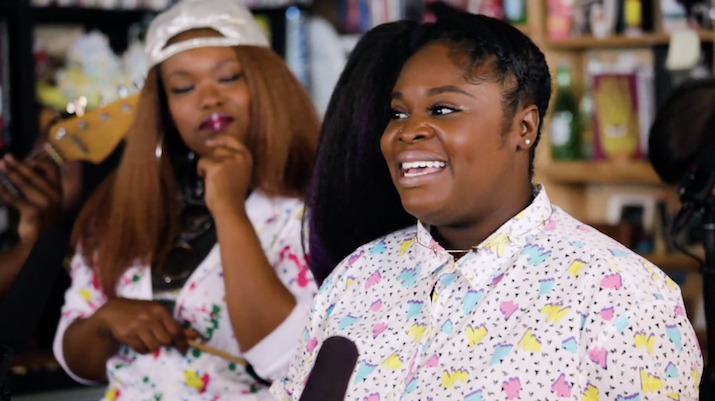 World Cafe’s ‘Latin Roots’ series continues with a live set from Balún.  Originally from Puerto Rico, Balún is now based in Brooklyn.  Their latest album, Prisma Tropical, expands on the band’s signature electronic, percussive, tropical sound which they call “dreambow.”

Steve Earle‘s latest album, So You Wannabe An Outlaw, features collaborations with Willie Nelson and Miranda Lambert.  It’s dedicated to the memory of Waylon Jennings.  On the next World Cafe, Earle performs live and tells stories about crossing paths with Jennings, Johnny Cash and that time Johnny Bush pointed a .357 Magnum at Earle’s head.

Widely known as the winners of NPR’s most recent Tiny Desk Contest, Tank and the Bangas are overnight sensations from New Orleans with a very unique soul-funk sound. Today they join us at the World Cafe to relive that Tiny Desk Concert experience and discuss their creative roots in poetry.

Robyn Hitchcock has a bit of a ghost fixation — he channeled that and his sense of “radical empathy” into writing songs about famous women in history such as Virginia Woolf and Sylvia Plath for his self-titled latest album.  The London native discusses that, and his recent move to Nashville.

The rock band The Districts has a new album called Popular Manipulations.  On the next World Cafe they’ll share stories about opening for The Rolling Stones and we’ll hear some of the music the band was listening to while making their new record.