Andrew Bird has been making music since his debut album 20 years ago.

And thank the music gods for that. 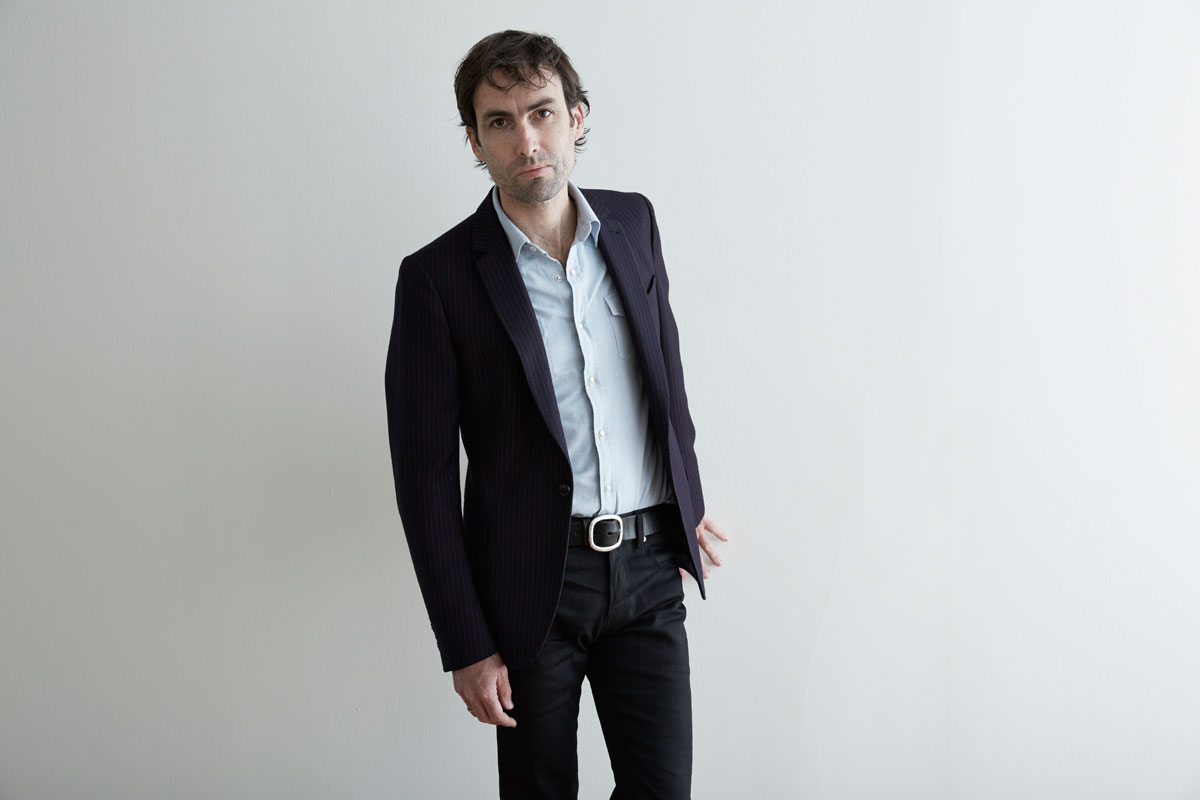 Fans of the whistling violinist know just how exceptional Bird’s career has been. His music has traversed genres like hot jazz and indie rock, instruments like phonographs and glockenspiels — a diverse musical canon, brilliantly and consistently infused with layers of whistling, strings and heavenly loops.

Now, with his latest release Are You Serious, Bird is again offering listeners something new and beautiful — a personal album. Unlike some of the more ambiguous narratives of albums past, Are You Serious dives into — well — serious topics the artist has faced in the past several years: fatherhood, falling in love, even his wife’s cancer diagnosis. Ahead of KXT 91.7 Andrew Bird at the Majestic Theatre next Wednesday, KXT’s Lauren Menking spoke with the artist about this new album and more:

LM: Your new album Are You Serious is quite personal — straying away from the more cryptic, third person lyrics you have used in the past. You’ve been making music since 1996 — why now?

AB: You know….I really don’t know. I guess I’ve never really thought about myself as a kind of songwriter. Whenever I would go to a show and see a singer/songwriter open a vein on stage and sing about very painful things, I’d be a little incredulous at first. I knew that they were going to do the same thing the next night and the next night, and how can you be in a perpetual stage of sharing that? And I thought, “Well, we could talk about some other things, too,” you know?

But, I don’t know. I think when things in my life got so visceral and very much real it would be impossible for it to not come out in my writing. But, you know, I have a certain self-awareness about it. But I think also I’m on a trajectory towards appreciating more — still poetic — but more plainspoken writing. I think John Prine and Townes Van Zandt are good examples of that. And that’s more what I aspire to, I think. In my twenties and thirties I was into more…taking kind of an internal trip, you know? Not so much anymore.

LM: Does the intimacy of these songs affect how you’re performing them?

AB: Um…no. It doesn’t. There’s something about that sort of sacred space of the concert hall or wherever I’m playing — there’s an unwritten pact with the audience. It’s a safe space. What I’ve learned is that outside the concert hall is where it gets really tricky — in journalistic forms, for instance. Now I understand why some songwriters don’t want to talk about their songs. But, in the past I’ve been like, “Sure, just ask me what the song’s about. I’m happy to tell you about it.” Now I hesitate a little more.

But yeah it’s a funny thing, because if you’re concerned with your privacy, why would you project it out there to strangers. I don’t know — I can’t explain it. But there was an urgency with this record. I felt compelled to talk about it — in song form, at least.

LM: Well, kind of on that note, you are — and correct me if I’m wrong — a self-proclaimed introvert?

AB: (Laughs) I…just am. I don’t know if it’s self-proclaimed. I guess that’s almost an oxymoron in some ways.

LM: (Laughs) Right, well, I guess…do you find it challenging being an introvert in an industry — the music industry, that is — that sort of values and caters towards extroversion?

AB: Yeah, I don’t know. That’s been an interesting thing…I’ve heard that recently people are finally discussing “the quiet child.” The line I’ve heard that’s pretty poignant, I thought, is “I’m not shy, I’m quiet.” And just because I’m not saying anything doesn’t mean I don’t probably have more to say about it than anybody.

I was definitely that kind of kid. The telling thing is that I was painfully quiet — put into remedial special-ED, just because they thought there was something wrong with me. But as soon as I would have to give, like, a book report or stand up in front of an audience and put in front of the class, I was completely articulate, confident and poised. But once I went back into the group I was uncomfortable — just on a different wavelength in a group situation. And that would alarm the teachers, too. My mom would get calls — “There’s something wrong with your child.”

But I still feel that way. I’m more comfortable in front of a couple thousand people than I am with friends and family sometimes.

LM: Well, just as you’re the introvert’s musician, you’re also — I think — an English major’s musician. Your wordplay and diction and strategy — which is to say a lot with a little — is all very literary. Are you a big reader? And does that influence your work at all?

AB: I am. A big reader? I’m a consistent reader. I’m looking for certain things [in reading]. For a long time I liked books that had dialogue of ways that people spoke in different eras. You know, like different colloquial expressions, and that would be really inspiring for me to hear — folk expressions that were really wise and just in people’s day-to-day. For example, a lot of Saul Bellow novels — the way people spoke in Chicago in the twenties and thirties. But yeah, for a long time that was really interesting to me.

Some of my favorite books are somewhat obvious in that I like to use scientific terminology — like Primo Levi. I got really into him for a while. I used to read more poetry than I do now. But I still get into that, too.

LM: I wanted to ask you about your Live from the Great Room series, which are these fantastic live shows you’ve been doing from your living room and streaming on Facebook Live. Why did you want to start hosting these, and why specifically in your own home?

AB: Yeah. If it wasn’t in my own home, I would say because it gets me out of the house.

AB: (Laughing) Yeah, it does kind of force me…I mean…I’m not a natural born emcee. I’m not the kind of person that’s super curious about people all around me and wants to ask them questions. But at the same time I’ve surprised myself. I do have a lot of questions for these folks that I bring, just beyond playing with them because, of course. Yeah, I think left to my own devices I would just be kind of sitting on the couch working over a new batch of songs. But with this I’m delving into other people’s music.

I like in my own music, and in playing live and in this situation — I like going off the cuff. I like situations where you have to plan for the unexpected — that whole tricky thing. You got to be able to roll with it and react — I like situations where you have to be reactive, both in playing and talking. Yeah, I got really into it. It’s been really absorbing and I’m going to keep doing it as much as I can.

LM: You learned violin very young — your mother started teaching you at age four, is that right?

AB: Well, she didn’t teach me — she didn’t know how to play herself. It was a solidarity effort. So it wasn’t your mom saying “Time to practice.” And you’re like “Well, why don’t you practice?” That’s usually what the kid will say. In this case, we both for the first two years played together. And then quickly the adult can’t keep up, which is what happened. But, it was all…I owe it all to my mom. She was wonderful. She’s an artist and would teach art classes in the neighborhood and take us down to the art institute to sketch Picasso’s. She was hugely influential.

LM: Are you doing that with him, as well? That artistry transfer — or are you guys diving into any art you don’t know together?

AB: Umm…it’s tricky, I’ve learned. I was told it can be. And, you know, I was like, “Ah, no, it’s fine — we’ll just have fun together.” (Laughing) But it’s hard not to when it is your profession. But you know, he’s studying piano and he’s playing violin, as well, at his school. But he seems to do a lot better when I’m not there. So, I just try to keep the environment around him just sort of infused with music. A lot happens by osmosis at that age anyway.

LM: Speaking of childhood, there are lot of soft, subtle traces of childhood in your music. “Measuring Cups,” I’m thinking, and “Imitosis.” And a lot of your lyrics and album titles have this children’s-booky, wondrous, curious quality to them. Is that an element you’ve intentionally brought to your work? Or maybe I’m way off base here…

AB: No, you’re right. The Mysterious Production of Eggs, and around that time, I really had some obsessions with it. Yeah, all my protagonists in those records were generally children. Or there were often times a scientist that is trying to quantify things that can’t be quantified and failing — and I look forward to them failing. And the child is maybe trying to show them that there’s more than just the empirical approach to things. I kind of thought that I moved away from that, but it keeps popping up — like “Chemical Switches” [on Are You Serious], for example. But yeah, it’s been a major theme.

LM: Now that you have a kid, has that changed at all? Is that part of why you’ve strayed away from that?

AB: I don’t think so. I would think that would only enhance it. I’m still kind of developing this “Professor Socks” television show concept. I’ve been working on a kids show — I’ve got a couple songs — a science kids show. And that I hope will come to be a reality in the next couple of years.

I mean, he’s so excited about everything. He has boundless curiosity, and no idea that learning would be a drag in any way. Peer pressure might try to get in there convince him otherwise. And he’s just grasping things for the first time. So, it’s more present than ever really.

LM: Finally, why no question mark in the title of your new album Are You Serious?

AB: (pauses) Is it really a time for question marks? I don’t know. Yeah…it seemed like it was a very considered thing. I just thought, there are so many possible ways to read that line, and I didn’t want to direct it. Now, granted, 95 percent of the time it is a question. But I didn’t want to tell you how to say it. So, I just wanted to leave it as open as possible. That title has been the working title for the last four or five records as sort of an internal joke when I send [a record] in to friends and my manager just to listen to it and it’s kind of like, “Really? This is what you spent the last four years of your life doing?”

But now it takes on a little more. It was the most apropos with this record as I’m dealing with sincerity — or expectations of sincerity — and autobiographical songwriting expectations. So I was just kind of poking fun of myself for coming out with my “super personal record” or whatever.

Don’t miss out! Get tickets here.