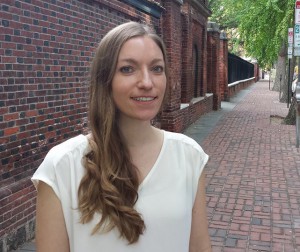 We’re proud to introduce the latest addition to the KXT family.

Amy has settled in as an on-air host, so odds are she’s already spun your favorite song a few times.

We thought you might like to know a little more about the newest voice of KXT, so we sat down with her to talk about her background, the local music scene and her favorite artists.

KXT: Tell us about your previous radio experience.

Amy Miller: I started in radio while I was a student at UC Santa Cruz in California and I hosted both a jazz show and indie rock show. From there I went on to work as a programming assistant at KFOG in San Francisco, where I learned a lot about radio programming and the Triple A format. I moved to Virginia in 2005 to work at The Tide (a start-up station owned in part by musician Bruce Hornsby) where I was the Program Director. I took a break from radio in 2009 to pursue my own music and tour with my band after moving to Philly. I was a DJ for a couple of years in Philly on WXPN’s now defunct Y-Rock station. I’m really excited to be back in radio and working for a station with such an amazing mix of music.

KXT: What excites you most about KXT?

Amy: First and foremost, the music. It’s also an exciting feeling to be working at a station that is still relatively new and looking to grow. The people here have been so welcoming and it just seems like a really great environment where everyone is really into the music.

KXT: What are some early impressions about the music community in North Texas?

Amy: I’m still working on getting settled here in Dallas and am really excited about checking out some of the music clubs here and in the neighboring communities. I love discovering all the local music KXT is playing and am looking forward to checking out some local bands live. Any suggestions from listeners on cool bands/venues to check out would be great! I really immersed myself in Philly’s music scene when I was living there and would love to do the same here. Any band that breaks out and has a national presence, started as a local band and it’s fun watching that growth.

KXT: What was the last concert you attended?

Amy: I checked out The Chive Fest this past weekend at Southfork Ranch and saw the John Butler Trio and Manchester Orchestra. It was a lot of fun and not too overcrowded since it was the festival’s first year.

KXT: Which band or artist is your dream interview?